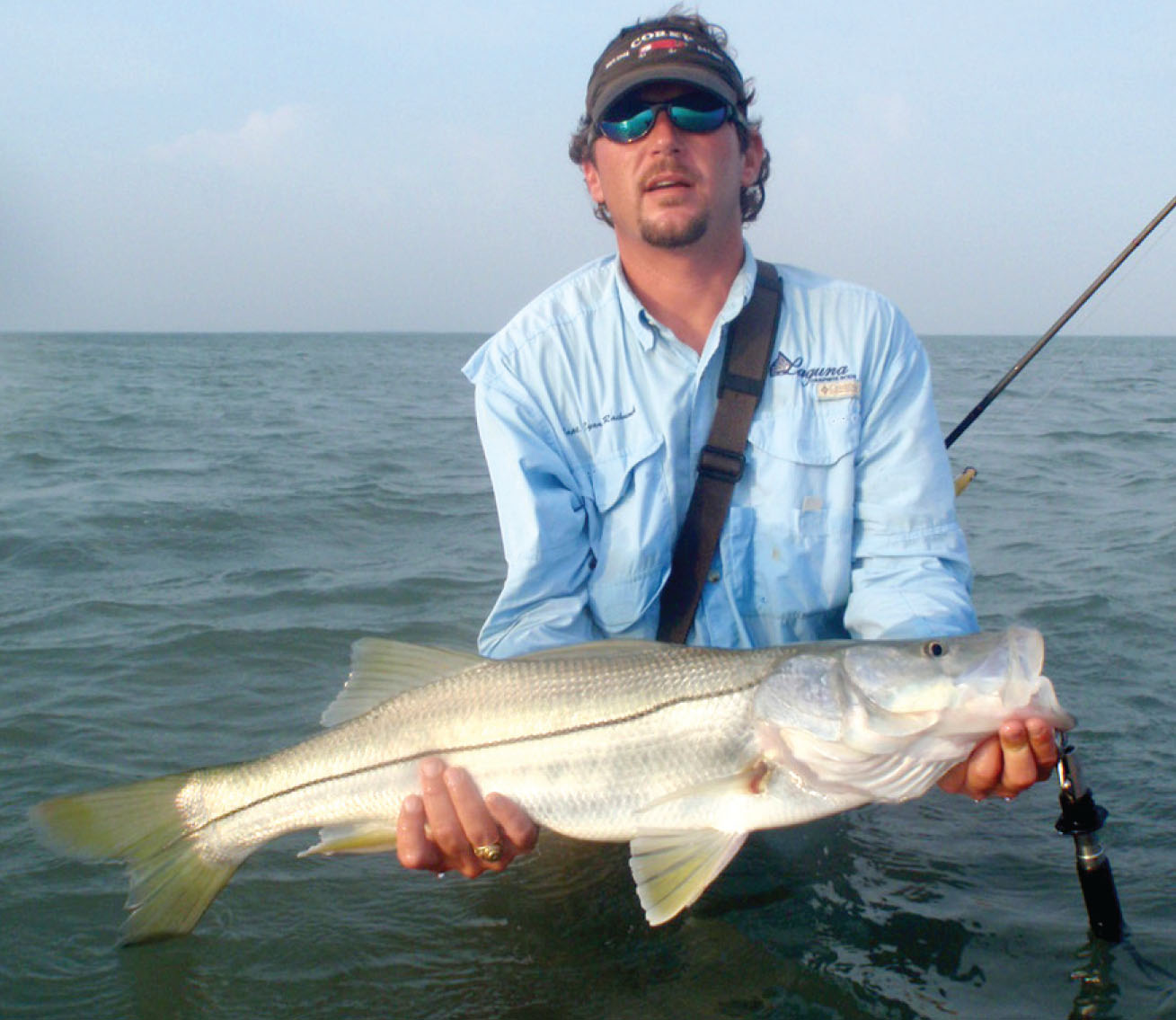 Capt. Ryan Rachunek 33 3/4 trophy - CPR!
Now that we're through fighting the windy conditions of early summer, I can sum up all of what's been happening down south in a few words. "It's been fun!"

The early part of the summer brought the usual strong winds along with lots of floating grass. The grass became so thick some days that we just could not fish in many prime locations. During grassy conditions, make it a point to know which areas do not collect as much grass as other areas. Some of those areas can be located on the vast sand flats of the east side, most leeward shorelines on the west side, and back bays that contain hooks or land masses that can capture most of the floating grass. Early summer brought plenty of trout opportunity and lots of excitement but the redfish at times were harder to pattern. It seemed you found them one day and gone the next day. That's OK though, the trout kept us busy.

At present, the winds have died considerably and locating schools of redfish has become easier. Once you find their pattern you can bet it will hold so long as they not heavily pressured. Many of the schooling redfish have been in the oversize category. There have been numerous redfish schools on the east as well as on the west side, and it's always fun wading up to them and catching them till your arm gets tired. One of the keys has been big schools of mullet. With the tides being as low as they have been, these fish have been around shallow flats that contain easy deep water access. When the fishing pressure increases they drop into the deeper water and then become harder to locate. The key has been finding them early and throwing small topwaters or 1/2 oz spoons at them.

Another tactic that has brought recent success is fishing slowly and carefully whenever a school has been located. We tend to stay put in that location for at least an hour and sometimes two or three, covering it at a very slow pace. If we felt like we passed them up, we hop on the boat and do the same wade again. Sometimes the second wade can be as productive as the first. It's the same concept as drift fishing. When you get on a bite and then all of a sudden it turns off, it's a good plan to try a rerun.

I wrote an article last year about fish highways and it had to do with guts and depressions and the tides rolling in and out. Baitfish and gamefish use these highways to enter a particular area; if you pay attention to the tides and what they are doing in the areas you fish, you too can find a pattern and locate these fish highways. Some things to look for are 1- Where is the bait concentrated and where is it heading. 2- Is the bait nervous? 3- Are slicks present? 4- Is the bait being chased? If some or all of these things are present there's a good chance you have located a fish highway and will experience a good bite.

August is certain to bring plenty of water into our bay systems and hopefully plenty of rain as tropical depressions will begin to pop up in the gulf. Keeping an eye on the weather will be a smart thing. The influx of water will cause the fish to spread out especially along shorelines on the west side. Back bays will be filled with bait and hungry predators. The sand on the east side will have plenty of fish way up on the island shelf. Redfish will continue to school up and hopefully the floating grass will be washed away with the rising tides. Top bait choices will continue to be topwaters along with Brown's Sea Devils on 1/8 ounce heads and the reliable gold spoon.

In closing, I would like to thank Dr. Andre Landry from Texas A & M University at Galveston for his work here in the Lower Laguna. Dr. Landry and his graduate student, Chris Chapa, are collaborating with TPWD biologists William Karel and Joel Anderson to conduct snook studies. Their efforts include DNA analyses as well as recruitment and habitat preference studies.

I had the pleasure recently to assist Dr. Landry and his team. We caught and released 47 snook in a three-day period, taking a small fin clip from each fish for DNA testing. Richie Hominga played a role in helping set this up and I want to thank him for his efforts. Snook have a special place in my heart and I hope to see the fishery thrive. Texas snook are simply too precious to be caught only once. This is why all my snook trips are 100% catch and release.