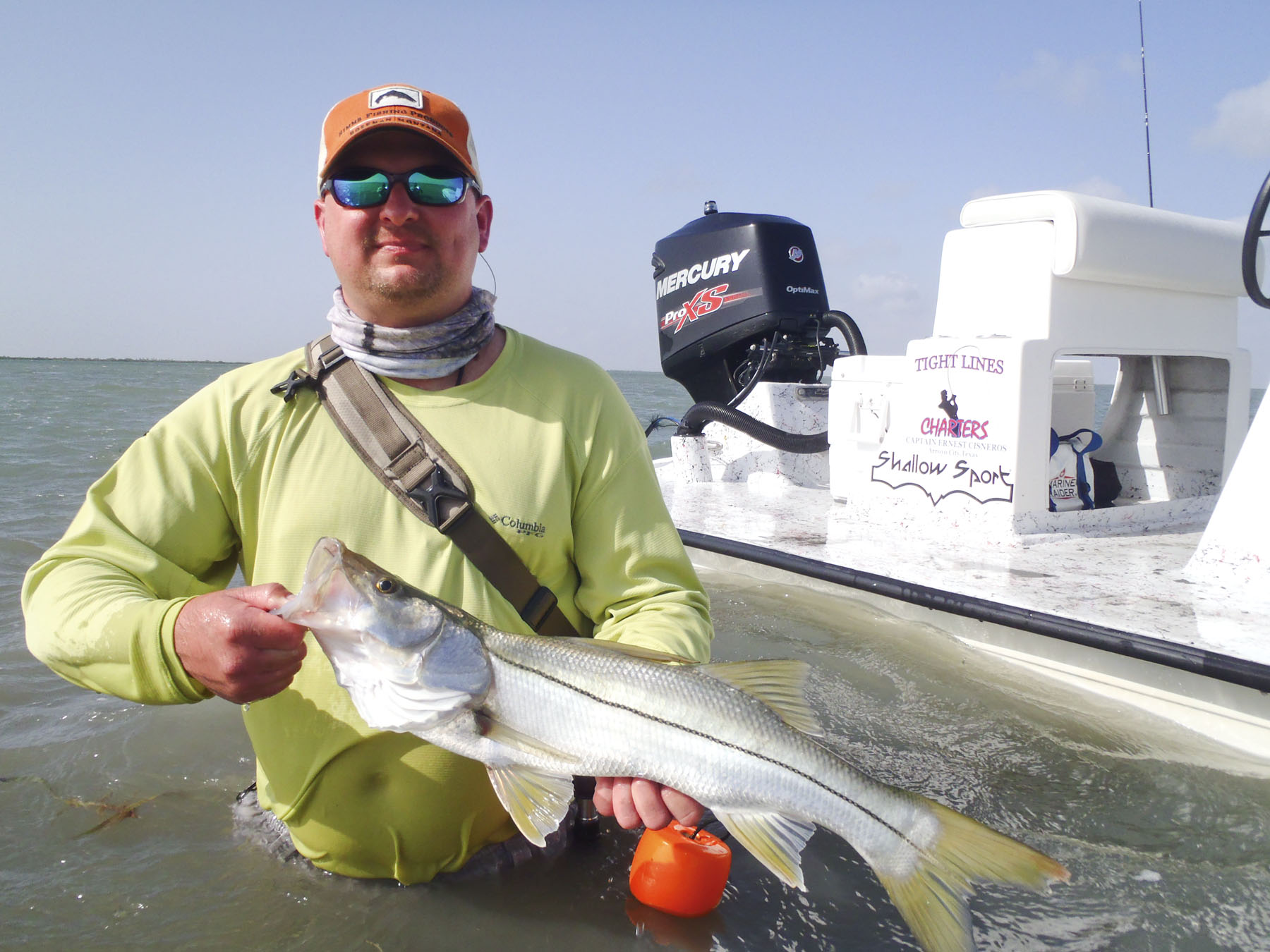 Justin marked one off his bucket list when he landed this Texas snook.
I was wading with a client and he asked, "Hey, what's the bottom like over there? I noticed a lot of contour over yonder and right here it's completely flat."

I mention this because in our shallow lagoon, where the average depth is only two and a half feet, we still have plenty of structure to attract fish. It's not as defined as in a deeper bay system, but we definitely have structure. Some of it you would never notice unless you wade. Sometimes we find depth changes of only a few inches; surprisingly this can make a big difference.

Potholes (slightly deeper sand spots surrounded by grass), the edges of oil field channels and the ICW, are excellent examples of structure that holds fish during the hotter and colder months of the year. Sand bars might have only slight depth changes, but it is still structure. And let's not forget grasslines bordering vast sand flats. The edge of that grass is structure too. Even a color change should be regarded as structure. Structure is a fish magnet, add bait and current, and chances are you will run into fish.

Currently, our most productive structure is potholes near the ICW, grassy shoreline edges that flood on higher tides, and spoil humps adjacent to deep water. Sandy, harder bottoms with bits of shell have also been good for trout in the early morning and late evenings.

Speaking of trout, the bite has been pretty steady, but on a few occasions recently it has gone completely dead. I believe the causes to be slack tides during daylight hours and full moon. There have been numerous days when the greatest tidal flow occurred early before we launched, then at daybreak we catch only the tail end of it. A day like this makes fishing very tough and you must wait for the evening tide to move water for a consistent bite.

The majority of trout have been slightly undersize to the mid-twenty-inch range, but they're all fun to catch when the tide is moving and bait is present. It has actually been fairly easy to catch nice trout in decent numbers so far this summer. I will add that the evening outgoing tide over potholes has been a good producer of bigger trout, and plenty of other action too, right at dusk.

Redfish have been concentrated in smaller and fewer areas than trout hard to find some days. They tend to move a lot and I attribute this to boat traffic; the pattern changes almost daily according to the amount of pressure they receive. Mid-week I usually find them where they should be and they'll take a lure weekends are another story. The best redfish lures, trout too for that matter, has been the Kelley Wiggler ball-tail shad. The best color in "colored" water is still plum/chartreuse while the Flomingo works pretty well in all situations. Topwater action for both species remains rather slow on average.

The flounder and snook bites are way off course. A few flounder are being caught on the edges of channels, but nowhere near the numbers we had the past several years. I hate to say it but the snook bite has been slow until just today we jumped fifteen and landed ten. Let's hope it continues. I practice catch and release on the linesiders and like it when my clients enthusiastically agree to photo and release all snook when they book their trip. I wish more would follow. Snook are way too precious to be caught only once, and there are plenty of other fish to eat.

For the last seven months I have been using the new split-grip version of FTU's Green Rod - 6'6" APL1 light action with recoil guides. I truly like the feel and action of this rod and most certainly recommend it. The split-grip makes palming my reel much easier with less fatigue during a long day, and the same as all the Green Rods, it is super sensitive. Even the finickiest of bites can be felt. The other rod I alternate with and also recommend is the Green Rod with standard grip in the 6'6" APXL1 extra-light action. Fishing Tackle Unlimited's stores in Houston are the exclusive source and you can also shop on-line www.fishingtackleunlimited.com.

I would like to add that if your catching is not where it should be... Don't give up, be a seagull! Have you ever discarded a tiny crust of bread or a single Cheeto in the water? Seemingly out of nowhere a sea gull swoops down. They notice everything; a good fisherman does too. Use your eyes to become a better fisherman.