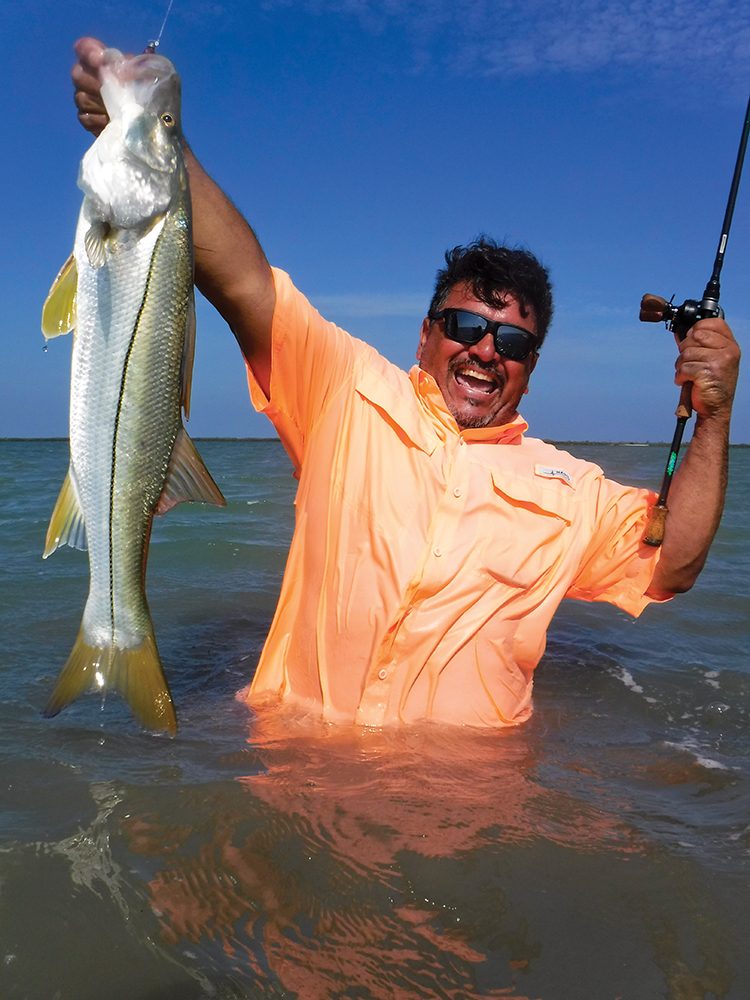 Art Leyva was all smiles with his first-ever snook: 32-plus inches.

A preview of late-summer’s wet weather hit us in June with torrential rain and flooding. We certainly needed the fresh water to balance the Lower Laguna’s high salinity. But, let’s keep in mind too much fresh water can have an adverse effect on bottom seagrasses as we saw in 2010. Not saying that's the case with this event but we are just now entering the wet season, and the possibility of more tropical weather. Let’s hope we don’t see a replay of 2010.

With that said, I expect water levels to rise much higher than they have been, which is standard for this time of the year. Tides will once again inundate backwater areas giving fish more territory to roam. Daily water and air temperatures will begin to decline as we enter the transition to fall with not only higher tides but decreasing hours of daylight as well. August traditionally delivers lighter winds, better water clarity between rains, and a welcome decline in floating grass.

June’s rains brought us more numerous redfish catches, still below par here in July. Redfish continue to be scattered in general but small groups are being found – no big schools yet that I have heard about. Better areas have been around spoil islands and shoreline coves away from boat traffic. Plastics such as the KWiggler Ball Tail in Plum-Chartreuse and Mansfield Margarita have accounted for many of the redfish we have caught recently.

Have you ever made what you thought was a perfect sight-cast to a redfish and it scooted away wanting no part of it? Well, help is on the way. KWigglers has announced a limited edition of baits infused with 100% natural garlic to add extra appeal to your presentations. Look for the release of the first batch of Willow Tail Shads in Turtle Grass and Texas Roach coming soon. I am excited to try these on redfish and big trout. Until then, don’t forget the 1/4-ounce weedless gold spoon that has been fooling redfish for decades.

Lower Laguna trout action for nice keeper-size fish remains steady and, of course, we’re catching lots of little ones, too. Most of our trout have been coming waist-deep in off-colored to trout green water. Fishing alongside the drop-off into the ICW has also been productive at times. Slicks are becoming more prevalent; target the platter-sized slicks as soon as they pop for best results.

For some reason, maybe the summer boat traffic, trout have been lying lower than normal in the water column. The best baits have been plastics worked slow near bottom or bounced and dragged right through the grass beds.

I am still not convinced that our bait availability is as good as in years past. For whatever reason, I have not seen the amount of bait that should be in the areas we are fishing. Maybe it’s the fresh water and conditions will change for the better as the salinity begins to stabilize.

One thing is for sure; the most productive trout waters have been areas holding concentrations of smaller mullet and pinfish. Keying on tide movements and waiting on the feeding periods has helped us recover from a slow start many days.

I mentioned the water temperatures would be cooling down some this month, and that should help trigger a topwater bite that has been sporadic for the past couple of months. Cloudy conditions, which we expect this time of the year, could also contribute favorably.

With all the wind we have been having, the afternoons have been great for finding birds working over trout gorging on shrimp. As our winds lay down this month, this will likely diminish somewhat. The trout, shrimp, or the birds will not leave. However, the birding action will cease as our windy patterns start their decline in August.

In closing, I would like to state that overall it's been a tough year so far, well off the pace of populations and landings we enjoyed as recent as three years ago. We are having to work smarter, harder, and longer to find good concentrations of fish. Nevertheless, a day on the water is always fun and educational. If it was really only about fish to take home, let me tell you it's much cheaper, faster, and easier to visit a seafood market.

Looking at the bright side, I predict the fishing will get better this month as our air and water temperatures begin to decline, and reduced boat traffic will allow fish to become more concentrated and not so scattered.