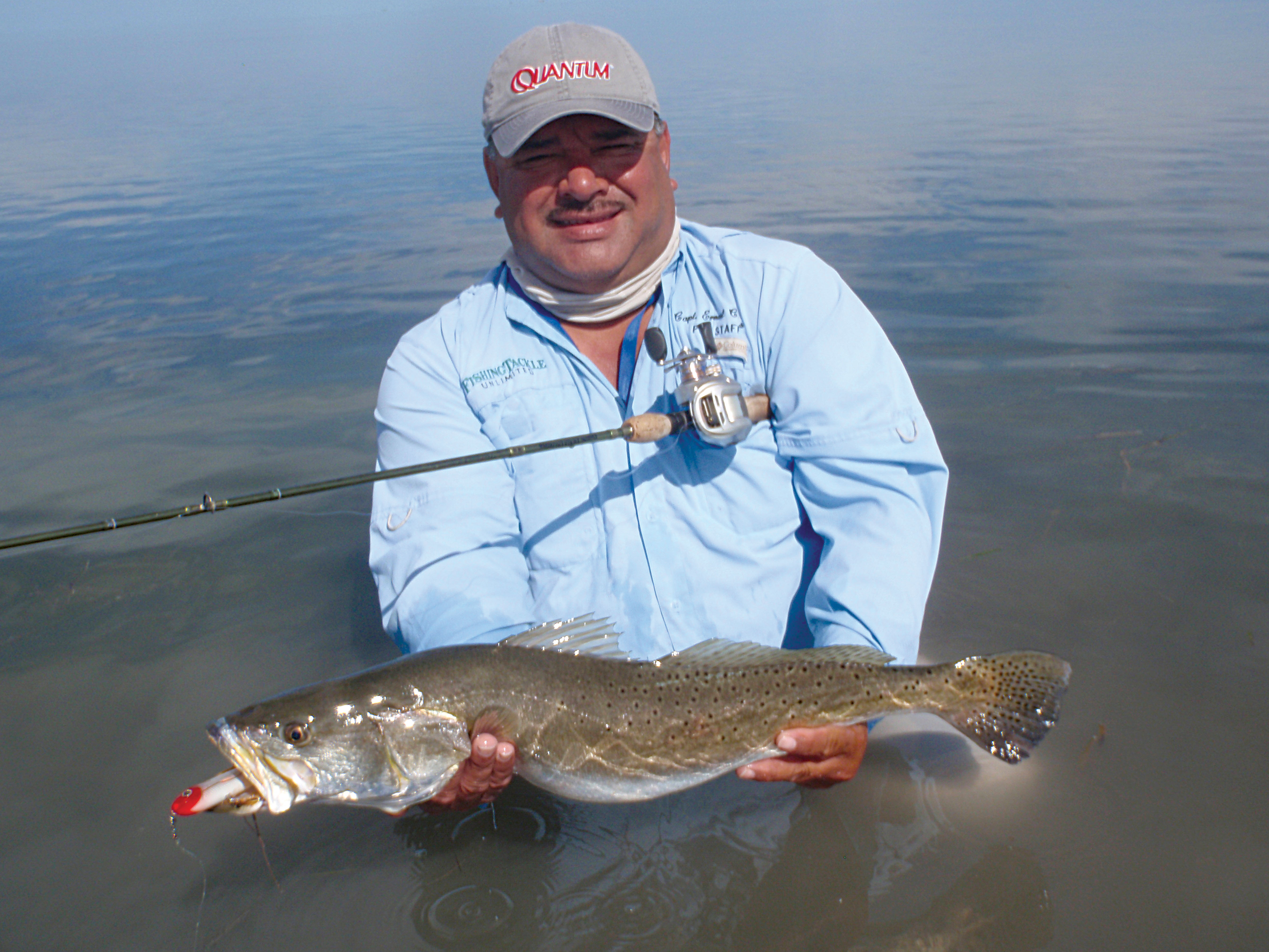 All summer and through early fall I anxiously awaited the arrival of December. There are several reasons for this, not the least of which are air and water temperatures cool enough to require wearing waders. It's not just the donning of waders that excites me, it's the mere fact that cooler temperatures allow us to fish all day without suffering under harsh summer sun. Another reason is greatly reduced boat traffic; the fish will not be nearly as spooky as in busier months. Finally, the main reason for my excitement is lots of hungry fish that are easy to pattern between the cold spells.

Our catching tapered off some in the later part of October and into November, especially around the full moon phases. The higher water levels scattered the fish in the early part of fall. The good thing is that our bays are full of bait. I have been fishing around acres and acres of active mullet. These bait schools always attract plenty of hungry redfish and trout and the temperature drop means that predator feeding will increase. The redfish and trout are already beginning to look like they have been on steroids and some are sporting a wintertime potbelly.

Perhaps the greatest thing about December fishing here in the Lower Laguna is that fish are fairly easy to find and generally willing to take what you throw at them. As fronts arrive on a more frequent basis the trout and reds will begin staging near deeper water. The ICW, adjacent guts, and channels are good places to start and the nice thing about winter fishing is that when you find fish, you can bet that there will not be just one fish, but rather a concentration of fish because of the favorable conditions that area might provide. In the wintertime it's common for us to do shorter wades and really concentrate in fishy areas rather than try a dozen areas looking for fish.

What does a fishy area look like in early winter? Apart from areas known to have produced in the past, I cannot stress enough how important it is to find concentrations of bait species in areas with easy deep water access. Shallow flats near the ICW during warming trends can bring nonstop action from both hungry trout and reds.

Most definitely the fish's metabolism slows down during cold spells and we should match this with slower presentations. Even though we still use other lures on occasion; suspending baits and slow fished tails take precedence when fish seem to be hugging the bottom. Quite often the bite is a subtle peck and this is when we need a super sensitive rod. I find Fishing Tackle Unlimited's "Green Rod" (APXL1) a great tool when trying to feel the lightest of bites. Don't get me wrong. If the weather and conditions present themselves for a surface bite, I will be the first to tie on a topwater plug. Pink Skitter Walks and the bone Super Spook Jr seem to attract their fair share of fish during warmer days, even in the middle of winter.

December also marks the beginning of trophy trout season. Trophy trout enthusiasts are widely known for their willingness to endure the elements and wait patiently for that one big bite. The Lower Laguna certainly produces its share of wintertime trophies and it is beginning to look as though this year may be even better than the recent past.

In closing I would like to give an update on the red tide outbreak along the Gulf of Mexico beaches from Corpus Christi to South Padre. As of this writing the majority of the red tide has been confined to the Gulf with no real ill effect in our bay system. Some fish kills have been documented in the Lower Laguna, mainly piggy perch, mangrove snapper, mullet, catfish, and other small fish can be seen floating south or around the causeway. A few miles further north in the Laguna you could never tell that a red tide is present in the Gulf of Mexico. Let's hope that the colder weather that should reach us soon will make it all go away. In the meantime the chase is on for the fish of a lifetime. If you can bear the elements, your reward is one cast away. Don't forget your camera. Happy Holidays!