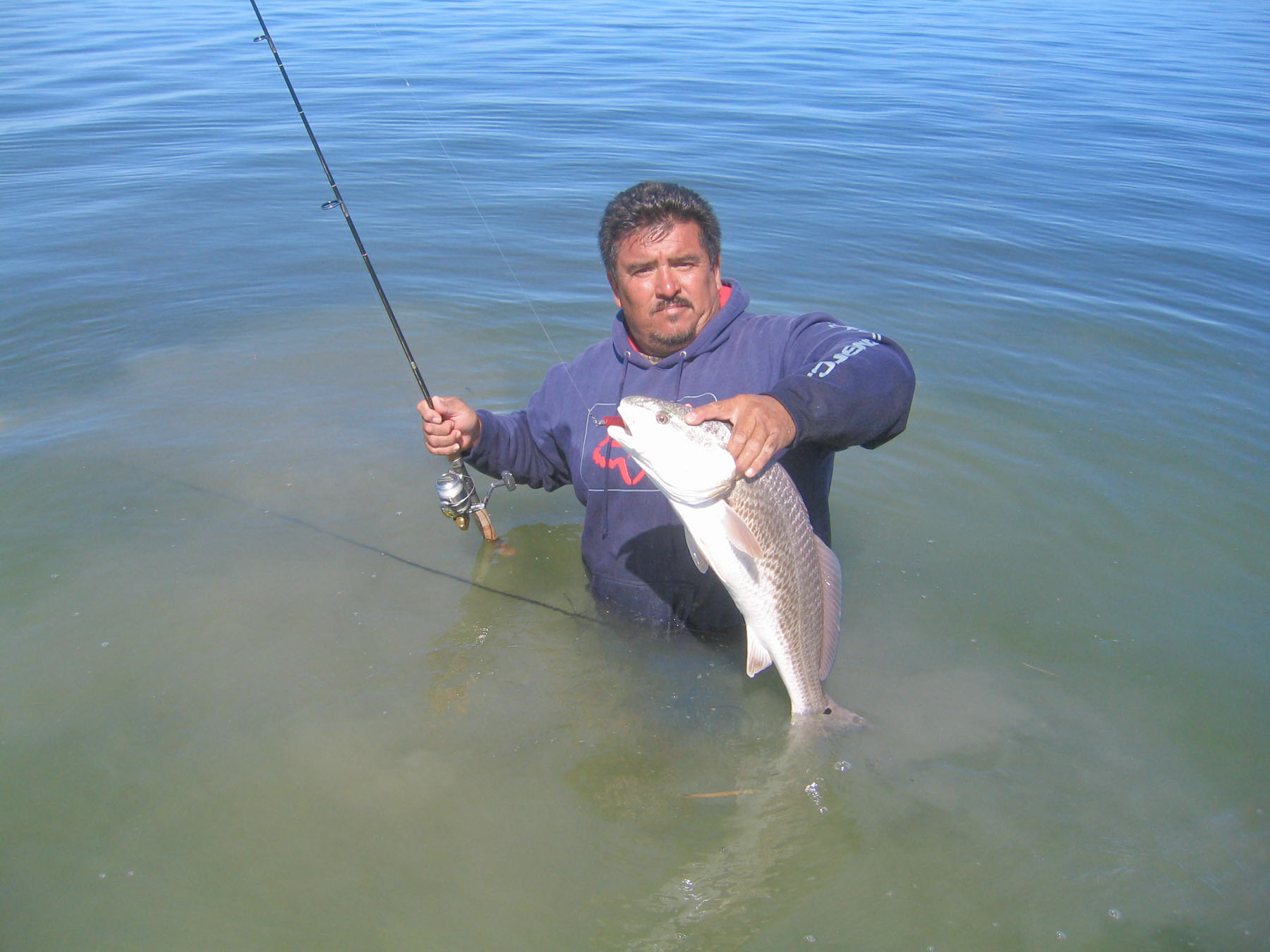 Art Leyva had a blast pulling with a big school of reds.
Getting off the water early today was difficult as the catching has been very steady. Owing to a prior commitment, it was with a reluctant "goodbye" and a promise of "see you soon." The last couple of weeks have been remarkable, even more so when you consider that it usually gets better as the air and water temperatures cool further in December. Are you ready?

Recently I've had opportunities to fish from the Land Cut south to Arroyo City and even further south in the Port Isabel/South Padre Island area. The waters near and north of Port Mansfield have yielded some awesome catches of trout and redfish. Lately at Mansfield, it has not been out of the ordinary to find trout in the five to seven pound class and limits of eighteen to twenty inch fish in only a few hours have been easily attained. The amount of bait in the Port Mansfield area is incredible. Truthfully, I have never seen so much bait in our bay system as I did running the east side from the Land Cut to Port Mansfield the other day. The bait line extended for a solid three, maybe even four miles. Redfish have been holding all along this line and the sheer number of them is stunning.

At Arroyo City, the fishing has been quite a bit slower. This is no doubt due to the fact that the Rio Grande is still overflowing and periodic releases of freshwater are being made through the Arroyo. Between releases the clarity and salinity recover enough that you can see bottom on the flats but it lasts only until the next release of freshwater. Fish are still being caught but not at the rate expected for this time of the year and certainly not like we're seeing in other parts of the Laguna Madre. We are hoping that the water conditions will return to normal soon. If there is any bad news in the Laguna Madre it would be the seagrass die-off from prolonged freshwater inundation. Seagrasses are the foundation of the ecosystem and the flats around Arroyo City seem hardest hit of all.

The waters near Port Isabel have been productive for limits of "keeper" trout and lots of redfish, especially oversized reds. These fish have been hungry for just about anything on top or bottom. Super Spook Jrs in bone and woodpecker rigged with Gamakatsu single live-bait hooks have been taking lots of hits along with Kelly Wiggler's ball-tail shads in plum-blue metal flake. With the water temperatures finally dipping into the upper-60s fish are trending toward their winter patterns. Currently, potholes on the flats and sandy areas near the spoil banks have been the top producers for both redfish and trout. The redfish have begun to put on noticeable weight and we will soon see trout sporting their wintertime potbellies. Forage availability in this area is also very good, we are seeing unbelievable amounts of mullet and shrimp. South Bay is currently holding more shrimp than I have ever seen there and another first has been watching gulls picking off shrimp while hovering above schools of redfish in the Bahia Grande wetland lake. The amount of bait in our bay system right now is phenomenal which should bring us an outstanding winter season.

Each front from the north has brought noticeable change to the fisheries and also to the fish themselves. They seem to have fattened very quickly and fight with greater vigor. As it stands right now, catching has definitely improved over the last few weeks and we can't help but get excited about the prospects and opportunities that December will bring. Look for the tides to drop considerably somewhere around mid-to-late December. Concentrate on deeper pockets on the flats as these are fish magnets during low-water periods. Pelicans will soon become our best indicators of fish location and feeding activity. Exercising daily to toughen your leg muscles is a good idea as mud wading is always a part of winter fishing and you don't want to miss the best of it.

December brings us the Christmas Holiday and the spirit of giving; you might want to consider giving your favorite angler an FTU "Green Rod" found only at Fishing Tackle Unlimited's two locations in Houston. If you have any questions or need help choosing the right rod length and action, come see me at FTU on December 11th for the FTU/Simms Fishing Event. Happy Holidays to everyone, and may your fishing end on a high note in 2010.