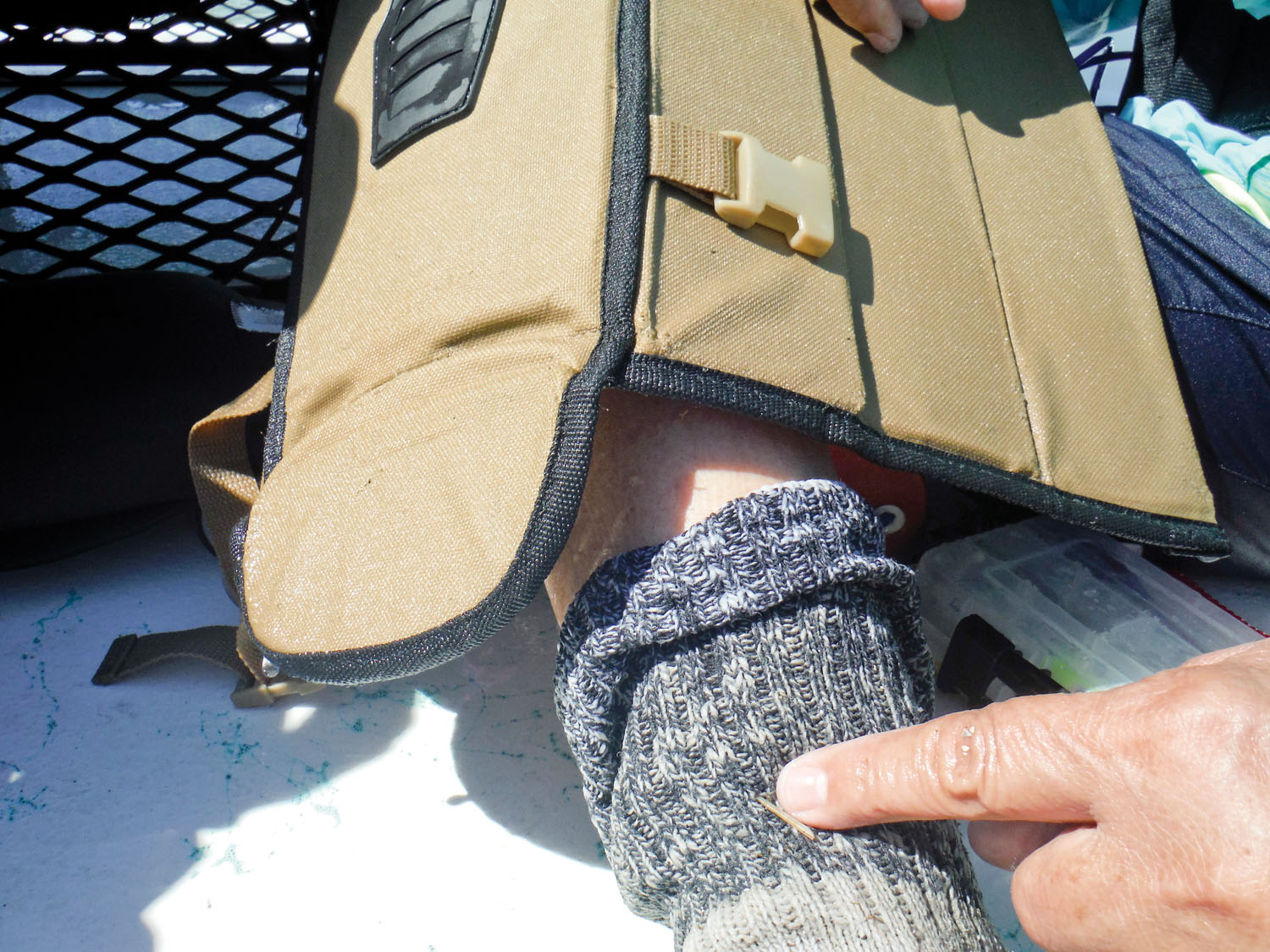 Lucky for Letty Scheiber, she was wearing ForEverlast Ray Guard Shields. The strike was deflected and the barb ended up tangled harmlessly in the fabric of her sock.

Looking back on the past eleven months, I must say that 2016 has been very good on the Lower Laguna.

We enjoyed excellent trout fishing with many career-best catches, including an 11-pounder for yours truly. Snook rebounded notably after several slow years. My summer snook charters began with multiple 30-plus and longer per charter in the early weeks, and total numbers landed beat the three previous years combined. Flounder action continues to be outstanding. Redfish pulled a disappearing act from mid-summer until early-fall but they came back like gangbusters.

A word of caution for wading anglers stingrays are thicker than I can recall. I fished three ladies recently, two of whom had no prior wading experience. I handed each of them ForEverlast Ray Guard Shields and took extra care with the inexperienced ladies to explain shuffling their feet. The day started slow but picked up mid-morning and everybody was catching fish.

One of the ladies called to me that it felt like something was wrapped around her ankle and something heavy was on top of her foot. Thinking she was wrapped in a ball of fishing line and grass, I yelled back, "Lift your foot and kick it off." She was okay at first but soon said something was pricking her foot with every step. I checked it out and to my surprise she had a stingray barb stuck in her sock. Luckily the Ray Guards deflected the hit and prevented the barb from penetrating. When the shock wore off she was back in the water catching fish.

Redfish have been taking topwaters aggressively, throughout the day on many charters. Water temps have been running 71 to 80 which likely contributes to aggressive feeding. Presently, good numbers of reds can be found on sand-grass bottom east of the ICW and on inundated grass flats and shorelines of the west side. Grass lines and potholes have been and should continue to hold redfish through December. They may retreat to nearby deeper water following a norther but should return to normal haunts shortly thereafter. A variety of lures have been working; Spook Jr., Bagley spoons, and K-Wiggler Ball Tail Shad in plum-chartreuse and bone diamond.

Seems we are catching trout everywhere we wade. Already we are catching big trout and we haven't even entered what I call "big trout" season. Trout have been very plentiful for several years and of course we find lots of short ones. Lots of fishermen crow about releasing big trout but I want to remind everybody that small fish deserve the same careful handling as they are the future of the fishery.

Heading into December, I do not expect to see a major change in trout patterns, except for possibly a few days when a strong norther reaches the coast. Even at that, I expect recovery to normal patterns will occur with 48 hours or less. Gearing up for larger trout toward the end of the month, our go-to baits will be the faithful K-Wiggler Ball Tails, MirrOlure's Paul Brown Original and Fat Boy and, of course, topwaters any day that conditions suggest they might work.

You're not going to believe the irony of this next bit. I took a day off following the ladies' trip for an on-the-water fishing-and-photo shoot. This article was half-written and already I had mentioned the stingray incident. Well, I ended up lending out my Ray Guards and guess what–a stingray nailed me. I'm doing fine and recovery has been speedy but the memory of the pain when that ray left its barb in my foot will stay with me forever. Wear your ForEverlast Ray Guard Shields!

On a better note, the catch and release program I offer has been named Empty Stringers and I am very pleased to have Capt. Wayne Davis jumping onboard. Wayne and I share the belief that it is time to give back to the Laguna Madre for the future of the fishery.

In a nutshell, participating in Empty Stringers means releasing all fish caught on a charter. At the end of the day you will select one of three gifts for each angler onboard. Along with the gift, you will register for a free full-day charter for two anglers, winner to be drawn at the Houston Fishing Show in March. Winner will also receive two FTU rods, two pairs of Costa sunglasses and K-Wiggler lures for your trip.

Since introducing Empty Stringers ten months ago, I am pleased to announce that we have released 739 fish that would have ordinarily gone to the fillet table. My sincere thanks to the clients who have participated and the sponsors who make it possible Fishing Tackle Unlimited, Shallow Sport Boats, Simms, Costa del Mar and K-Wiggler.