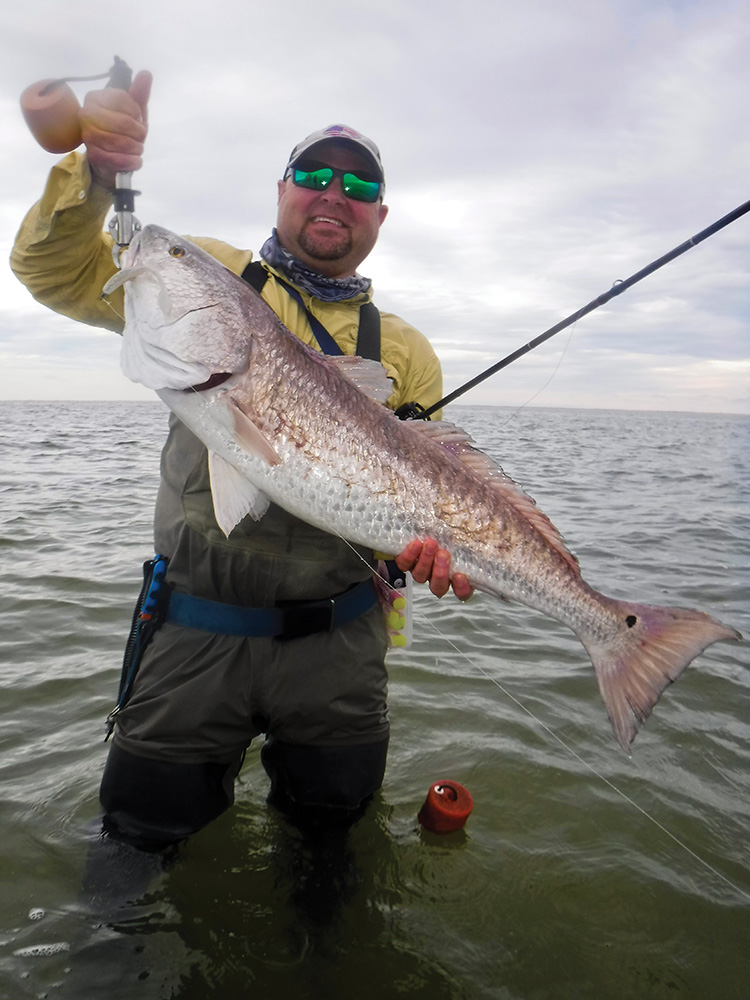 Hard to believe we are about to say goodbye to 2018. If I was asked to summarize the year’s fishing in the Lower Laguna with only one word it would be UNPREDICTABLE,  capital letters for emphasis. This is not to say we had a bad year, in fact, it wasn’t even close to being our worst year, if you rate it by the numbers of fish caught. However, it was indeed unpredictable when it came to finding them.

The unpredictable weather we experienced the past eleven months had a lot to do with ever-changing fish patterns. We did experience lower redfish numbers than in previous years, but the number of big trout we caught was higher than average. As we roll into December, I would say that fishing in the second half of the year has definitely been better than the first half. I am also happy to report that recent catches have generally been fair to good on any given day.

December can be mild and pleasant down here but a really gnarly norther can definitely disrupt fish feeding patterns and cool things down for a few days. Fishing can be exceptional right before or during the frontal passage, but as soon as the skies clear and high atmospheric sets in the bite will become very tough, even when you’re standing in the midst of them. It usually takes two to three days after a cold front for fish to get acclimated and resume their normal feeding routine. There may be exceptions but this a good general rule.

Water temperatures are currently ranging between low-60s after a strong front and then rising to near 80° during prolonged warming periods. Naturally, with chilly weather, everything in the bay moves a bit slower. Fish tend to hold on or near bottom; evidenced by mud puffs as they scoot away. Baitfish also tend to stay lower in the water column, especially of chilly, overcast days. With no surface activity we rely on birds – ospreys, brown pelicans, and even the lowly cormorant – to show us where the bait is. Water temperature and depth play important roles in formulating fishing plans during winter.

Redfish landings have been on the upswing since the temperatures dropped. I must say though; the numbers are still below the surpluses of past years. I expect continued improvement as water temps continue to decline. I also expect the reds to congregate on eastside sandflats and in muddy west side backwaters following frontal passages if the tide does not fall too sharply. A noteworthy point – finding them doesn't always mean they are going to eat readily. I have observed over the years that it’s usually the third day after the front before they resume normal feeding. Being that the tides will drop considerably this month, look for redfish to roam deeper holes, potholes near deep water, and spoil humps along the ICW, on low-tide days.

Topwaters can and should work when the reds stage in shallow water, more often though, we’ll be throwing KWiggler Ball Tail Shads and Willow Tails. Plum-chartreuse and Mansfield Margarita are hard to beat. Once again, look for the mud boils they make when spooked and also the wakes created as they roam shallow water.

Shifting focus to trout, December is the beginning of what we call trophy season here on the Lower Laguna Madre. The month may not produce many double-digit specimens but we definitely begin to see patterns emerging where schools of larger trout begin to form. If history repeats itself, December is a good month to find lots of four to six-pounders from the flats of South Padre to the southern end of the Land Cut north of Port Mansfield.

Weather and water temperature always dictates the patterns. Prime locations will vary from spoil banks, grass flats littered with potholes, flats near the ICW, deeper holes within a flat as the tide drops, and sand flats during warming trends. The numerous old oilfield cuts can also attract and hold lots of heavy trout. Small topwaters such as Super Spook Jr will be effective some days but our go-to baits by far will be the KWiggler Ball Tails and Willow Tails. Turtle Grass, Mansfield Margarita, Bone Diamond, and Plum-Chartreuse are my favorites.

On another note, I am excited to have been invited to speak at Fishing Tackle Unlimited’s Annual Inshore Expo, held at their Katy Freeway Store on December 8th from 10 am - 4 pm. Come by and say hello and receive some giveaways from Simms, Power Pole, and KWiggler products.

December is a great month of family gatherings and gift giving. I pray all my friends in the fishing community will enjoy a wonderful Christmas Season. God Bless and be safe on the water.