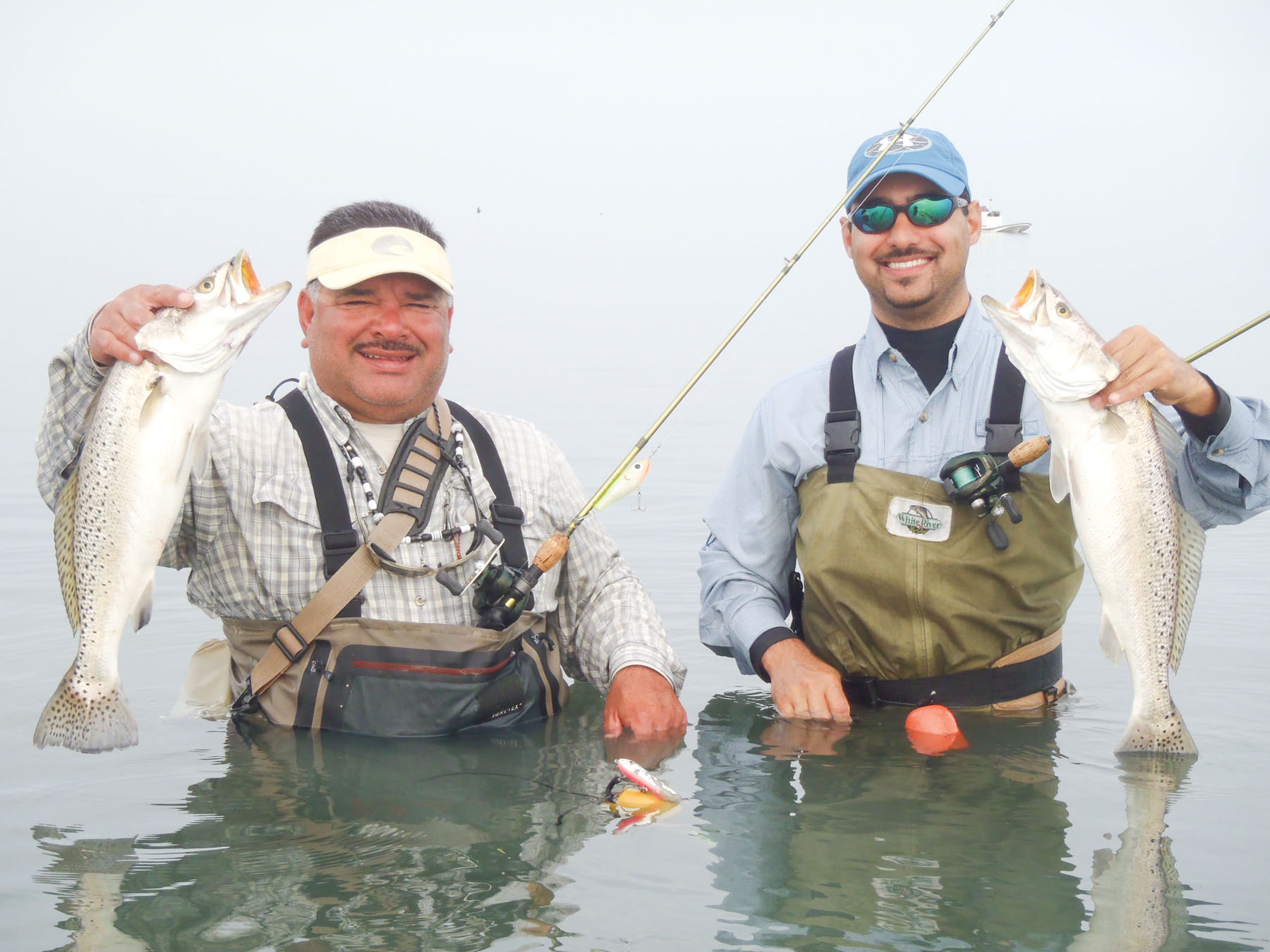 Another great fishing trip with Jesse Garcia.
Trying to write this report I am constantly interrupted as my mind drifts to the scores of big trout we have been seeing on the flats recently. What brings me back to reality is the wind gusting to near 30mph outside. This time of the year the weather is most unpredictable, but I will say the days we have been able to get out have rewarded us with outstanding catches.

On a recent outing a cold front had dropped the morning air temperatures into the mid-40s, the sky was overcast with a light north wind. The water temperature barely reached 50 throughout the day. To my extreme surprise we found a good concentration of redfish in knee deep water, long about mid-morning. I would have bet against it but, there they were in shallow 48 water. Redfish in general have been showing in smaller groups mostly near the Arroyo recently and though plentiful, not always evenly distributed - so this school really got my attention. Kelley Wigglers ball tail shads rigged on their short shank 1/8-ounce jigs have been very effective on them.

Recent trout catches and observations on the flats lead me to believe we could be in for a banner year. Already this winter we have released three trout over the thirty inch mark and have caught lots of twenty-two to twenty-six inchers. Numerous twenty-seven to twenty-eights have been keeping it exciting. The bigger trout we are finding have been unusually shallow as well. A shallow flat that has plenty of potholes, mixed with a grassy mud and shell bottom and deeper water has been the ticket on colder overcast days.

During the warmer periods big trout can be seen roaming the sand flats or laying in slightly deeper potholes on those flats. In either situation we have been throwing both Original Corkys and Floating Fat Boys with great success. The trick is to throw beyond the pothole and slowly working toward it, then letting it sink deeper. The pearl-chartreuse color has been getting hit often by large hungry sows. Waist to belly deep flats along spoils and old oilfield channels has been most productive for some keepers. Again, that Kelley Wiggler ball tail shad is my go-to bait.

This time of the year I'm looking for any signs of baitfish, especially mullet. On very cold days I don't care if its only larger mullet, Ill spend some time checking it out. When nothing seems to be moving on the surface, I will look for swirls, pelicans feeding, or mud boils. I will run shallow to deep and watch my GPS to keep track of water temperature. Our best trout bite has consistently been found when the water is running 62-65.

If your goal is to be more successful in the catching department, you have to be willing to put in the time observing, studying, and learning every time you get out. Dont put yourself into the category of that person that hooks up their boat without ever checking the conditions, tides, moon activity, and water temperatures (especially in the cold winter and hot summer months). I have mentioned this before, and its certainly worth mentioning again. If you truly want to become a successful fisherman, I believe there are many factors to be addressed, but there are four very important ones in my opinion that will get you going in the right direction.

First is to never stop learning; you can learn even on the slowest of days. Next, be sure that every time you go out spend the last hour or more fishing a spot you have never fished before. That's how you learn new areas. In addition, set yourself up to fish with fishermen that are better skilled and have a greater knowledge of the area you fish. The whole experience in just one outing with them can help boost your fishing skills tremendously. Last, keep a detail log of your outings whether you caught fish or not; this information will aid you in the long run. I surely believe if you practice any or all of these actions, it will aid you to be in the right place at the right time for years to come.

Regardless of your present skill level, the most important thing to enjoy every outing like a little kid on his first one. In the mean time, go study the bay as we are experiencing some of the lowest tides I have ever seen; you will see things you never knew were there. Wishing all you the best fishing this winter.