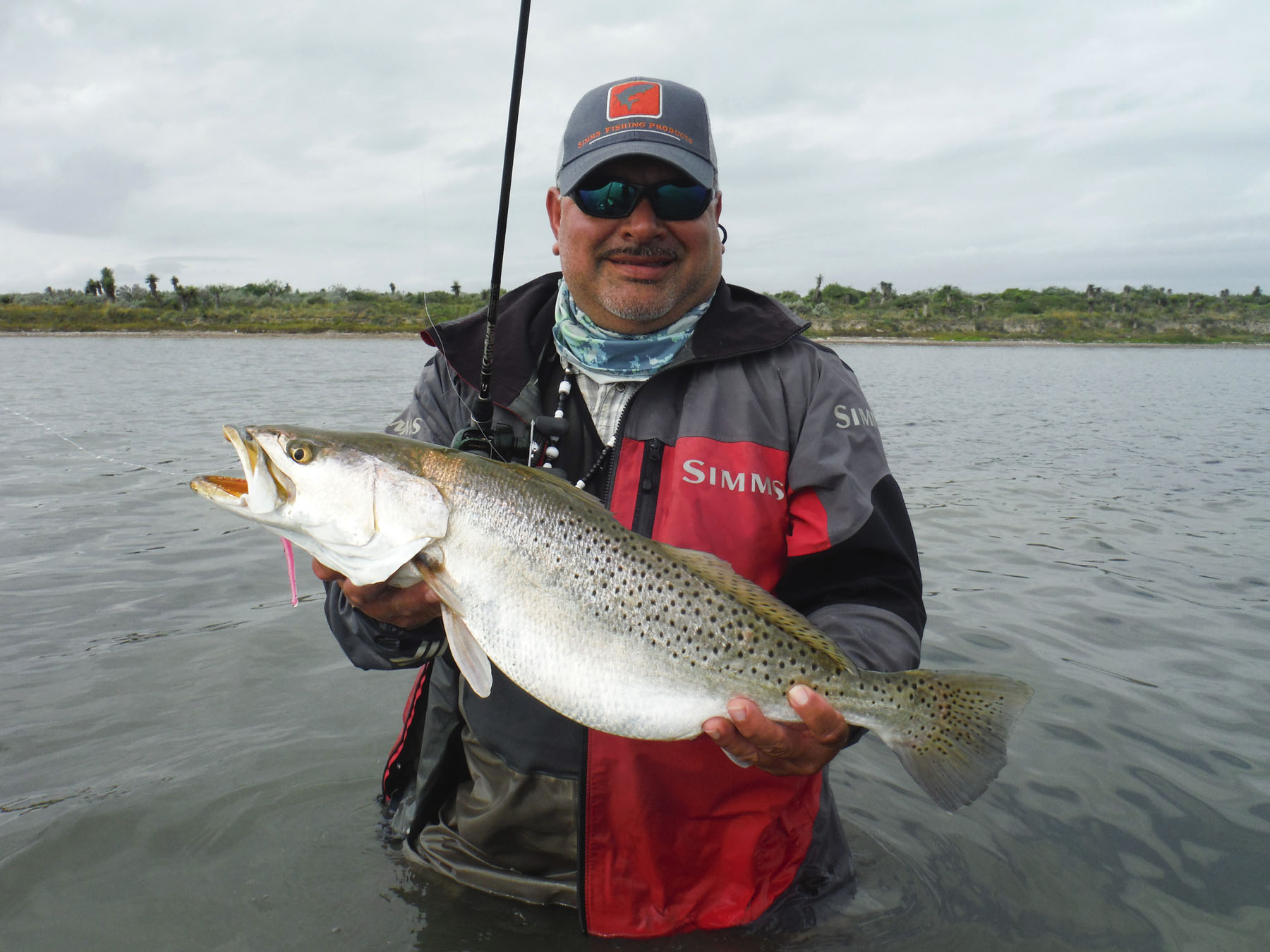 We are in the middle of the winter season and temperature-wise it has yet to be as cold as last year. I hope I do not jinx anything by saying this. Our water temperatures have been ranging from 51 after the strongest fronts to a much warmer 73 during consecutive sunny days and fishing has been productive on days that we did not experience excessive wind and/or steady rain. Water quality has greatly improved from the past couple of years, especially during that entire period of dredging and open water spoil disposal that was going on down south towards SPI/Port Isabel. There is currently a dredge working at the mouth of the Arroyo and this is affecting clarity from Rattlesnake Island to slightly north of Green Island. The fish are still there and being caught where clarity will allow them see a lure but for the most part sight-fishing is out of the question.

We are seeing promising regrowth of grass beds lost during the floods of July 2010. Baitfish and trout and reds are once again occupying large areas that seemed void of life for several years and this is definitely good news to anglers. This seagrass recovery is also contributing to the general improvement in water clarity throughout the Lower Laguna.

Our main focus for the remainder of winter will be trophy trout but I will never pass up a good redfish bite. Reds are still somewhat hit and miss, nowhere as consistent as our trout action. When we find good numbers we are making limits fairly consistently; small topwaters in bone and redhead (Spook Jr) have been hard to beat when they feed aggressively while the pink-flamingo K-Wiggler ball tail shad is our daily go-to bait. After a front passes and the water warms, look for the reds to be feeding shallow over good grass and pothole structure along the edges of flats near drops to deeper water. Tides will often be very low which can make for tough fishing over grass. I recommend rigging soft plastics on Gamakatsu spring-lock weedless-weighted worm hooks to get the lure through it.

Finding mullet is a primary key to success in winter fishing and on cooler overcast days this can be challenging; this is when I rely heavily on birds to point the way. The osprey is most reliable when sweeping and hovering repeatedly over any given area. Bait will often stay low but the osprey can see them. This defines a potentially productive depth and structure but figuring out the bite is still up to the angler.

Our trout action has been steady to fairly easy to pattern. On most trips we are catching limits and releasing many others. One of the keys to finding trout has been referencing the solunar table and timing your effort to coincide with predicted major/minor feeding times. The table is this magazine and also website mdwfp.com can be very helpful. During the feeding periods I want to be in an area that I think will give me the best opportunity and not running around looking for fish.

Larger trout are beginning to show more reliably, not in great numbers just yet across the bay system, but definitely in your smaller, classic winter haunts. When trophy fish are the order of the day we are staying put in areas known to hold them and waiting on the feeding periods and tide movement to develop. This is where homework with tide and solunar tables before hitting the water can make a great difference between casting practice and catching. Our best big trout bite has been during warming periods with water temp ranging 61- to 67. At times we have found them on hard sandy bottom but muddy bottom has been more consistent. MirrOlure's "Paul Brown" Soft-Dine, Fat Boy and Original slow-sinkers are currently our go-to trophy lures.

Now, if patiently staying put with hope of a trophy is not your bag, you can definitely find a lot of bites along the edges of flats that taper toward the ICW. Look for potholes near the channel and points of spoils that taper quickly to deeper areas to hold numbers of solid keepers.

The Houston Fishing Show will be held February 25-March 1 at the George R. Brown Convention Center. I will be representing Castaway rods and Fish-N-Hunt Pro Gear. Come by and say hello! Hopefully, their new line of rods will be on display so that I can demonstrate what I truly like about them. In the meantime the chase is on for that trout of a lifetime.