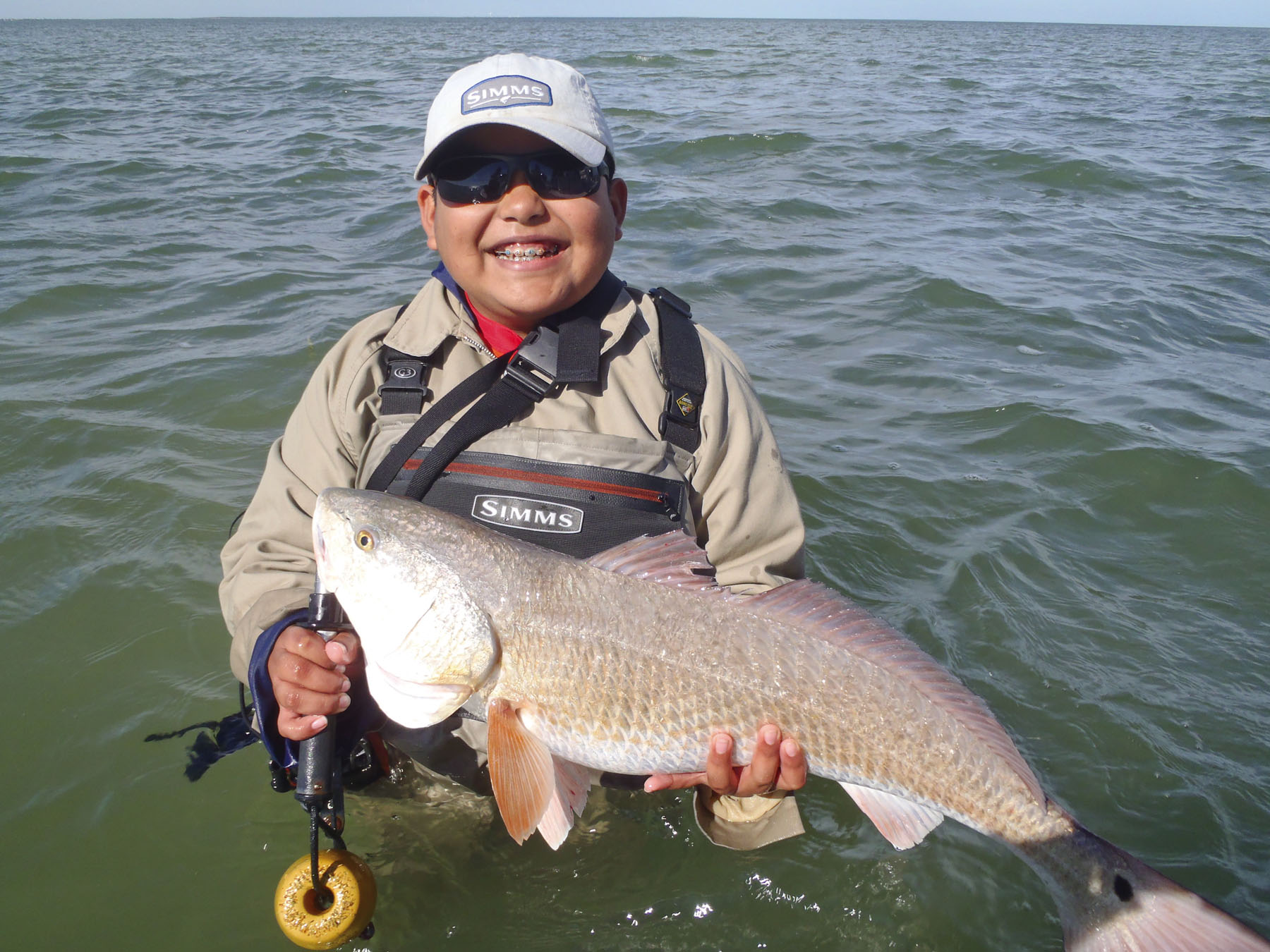 This hefty winter redfish sure put a smile on ten-year-old Freddy’s face!
As we move into the New Year I want to thank all the people that have fished with me over the years and also my sponsors and everyone in the fishing industry that contributes to my success. A big thanks also goes to Everett and Pam Johnson for giving me the opportunity to share my knowledge and experiences through this great magazine.

Looking back, I would say 2013 turned out to be an average year, from my experience. We struggled with our redfish at times but the trout almost always made up for it. Late fall and early winter have been very good and I'm optimistic we will have better than average fishing in 2014. I mentioned in an earlier article that I have been impressed with the numbers of big trout we have been finding since late summer and I expect this will get even better throughout our winter season.

Water temps fell to 51 following the powerful Thanksgiving norther and this produced a minor fish-kill in parts of the Lower Laguna. Mostly mullet, some skipjack and a few sheepshead; I saw but a few small trout and do not believe any of these species suffered real damage. Bay water temps are currently fluctuating between the mid-50s and high-60s. Cooler water usually stacks the trout and reds in deeper guts and muddy potholes but a few warm days and they're right back out on the flats.

January will give us the lowest average tides of the year and we can work this to our advantage. Quite often I'm asked whether I prefer high tides or low tides. I believe the best situation for the way I fish would be the current of a falling tide during a period of generally low tides. I say this because generally lower tides concentrates fish on certain structure and tidal current definitely influences feeding.

A few years ago our editor wrote a piece on the importance of water temperature in winter angling, saying he carried a digital thermometer to monitor warm flows exiting bayous and sloughs on falling tides. I agree with this completely, even going as far as delaying the start of winter charters to take advantage of late afternoon warming and it gets even better when we are able to combine this with the current of an afternoon outgoing tide.

It would be great if I could say we are catching solid fish at every stop but such is not the case. However, there are plenty of known winter holes that are holding good fish consistently. During warming trends the trout have preferred muddy potholes in very shallow water and during cold weather they are moving predictably into the nearest deeper water. Even a few degrees warmer and they will begin to feed. However, even during warming, I find the trout have been waiting for the tide to move before the bite becomes steady.

The trout bite is often only a tap in colder weather and if you're not paying careful attention you will be missing bites. Slow-sinking suspending baits such as the Corky Devil, Fat Boy and Original Corky are all good on cold days with a moderately slow retrieve that keeps them in the lower half of the water column. Kelley Wigglers Ball Tail Shad in Flo Mingo and Plum-Chartreuse are also excellent producers with slower retrieves in these conditions.

Our redfish have been a bit more concentrated lately; we are seeing them in small schools around spoil islands and areas with sandy-muddy bottoms. The presence of active bait has been one of the keys to finding them. Some days they seem so well fed that we have to place the lure right in front of them to draw a strike. Calm days have made it easy to spot the tell-tale wakes of these schools on the flats and most have been concentrated around spoils and along main bay shorelines, not in the back lake areas.

I look forward to fishing during the winter season all year and it is finally here. And as I said earlier, the number of large trout we have been catching since late summer has me really excited for the trophy fish that I expect to see coming steadily over the next several months. I begin every wade and make every cast believing this is one that will produce my next career-best trout. The days are shorter so fishing all day is not so tiring. Plus, there is very little boat traffic on the bays. January is going to be a great month on the Lower Laguna, so don't miss out on an awesome way to start the New Year.