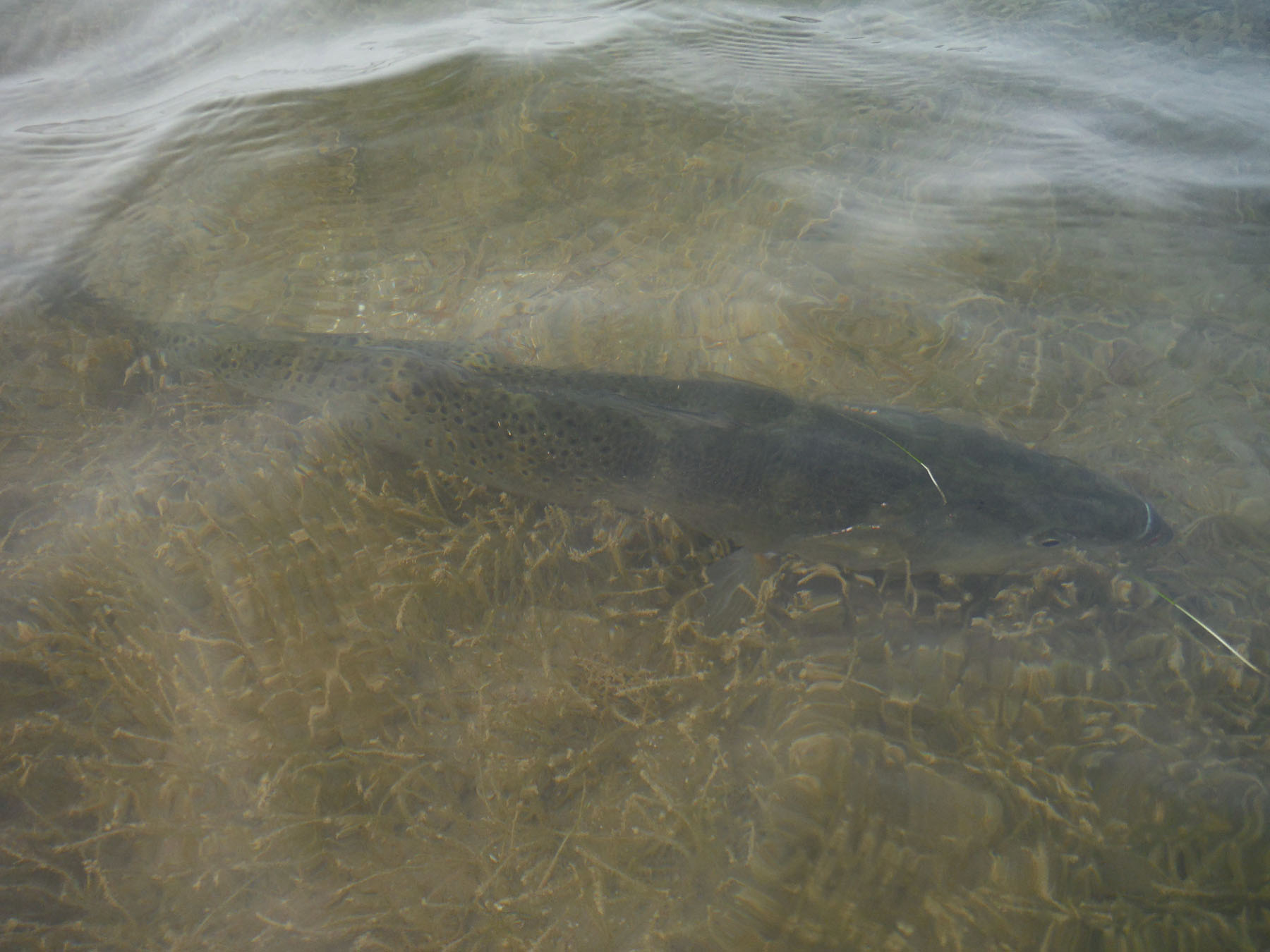 Don't rule out clear, shallow water on warmer days; this 7-pounder sure liked it!
I believe it goes without saying that unusual weather patterns can bring equally unusual fishing patterns. I recall that our trout fishing was very good for numbers in general with an encouraging number of large fishing during November and most of December 2013. Then came January's fronts, one right after the other, and our trout fishing suffered greatly for several months. The cold dragged on into spring and we were still wearing waders in May–a genuine first in my experience.

January and February have traditionally been our best months for trophy trout in the Lower Laguna but not last year. It wasn't until the water temperatures eventually warmed to normal due to May's stable weather that we were finally able locate reliable concentrations of trout that we could pattern predictably. Some forecasters say we are in for another cold and wet winter; I just hope the trout fishing in 2015 is not a repeat of last year.

Currently, we are catching solid numbers of trout but size-wise our catches are running below par. The good thing, and the part I'm banking on, is that it is still early in the season and the traditionally better months are yet to come.

January is definitely going to be cooler than last month so we will see our water temperatures take a dive and remain cooler for longer periods of time. This time of the year, it is not critical to get a sunrise start; concentrating fishing effort into midday and afternoon, right up till dark, is often a better plan.

Success will depend on various things and choosing to be on the water during the warmer hours of the day is an important element. Tidal movement is another big one. Winter is all about being observant and even if you're not a year 'round birdwatcher you need to become one in winter as gulls, pelicans and ospreys can all point the way to bait concentrations and also tell you the depth the fish are holding. Unlike in warmer months, trout and redfish spend a lot of time nestled into soft mud in winter. When they get spooked they make a significant mud boil taking off–another important clue that can increase your success.

Currently, redfish continue to be scattered throughout our bay system. Our catch numbers have been lower than expected, but if you patiently work an area where a few are found there's a good chance you'll find more. Topwaters remain effective; the Super Spook Jr and the One Knocker are working well for us in an array of colors. Key on those mud boils and wakes at the edge of the flats next to the ICW!

Our trout catches have been excellent but I said earlier we haven't seen as many heavy fish as we expected. There have been a few days that deep mud was the place to be but for the most part our trout have come off sand and shell bottoms. Working the edges of spoils during good water movement has also been very productive. We have caught them during incoming and outgoing flows, the fact that the water is moving seems far more important than the direction it is running.

Bait-wise for trout; K-Wigglers in plum/chart and flo-mingo on 1/8 jigs have done the trick many days. Paul Brown's original Corky and the Fat Boy have also been producing lots of strikes when they are feeding closer to bottom. Ninety percent of the time they have been hitting it on the drop. On a couple of warm, sunny days we have caught trout in the 4- to 7 pound range throwing topwaters right on top of spoil banks. I soon expect our bigger trout to follow this pattern, moving up shallow a day or two after the passing of a cold front. They know to follow the bait up shallow and at the same time take advantage of the warmer, shallower water. As we chase the bigger class trout, we will be thinking mud most of the time. On warmer days our efforts will turn to grass flats that contain potholes.

This is the time of year to layer up. It's always better to be prepared than to suffer in the cold and have to cut your trip short. I know that with Simms Wear I am always prepared for whatever the elements dish out. Checkout their outerwear and layering products at www.simmsfishing.com. As the New Year commences, whatever your chase will be, I hope your passion will bring plenty of tight lines. Happy New Year!