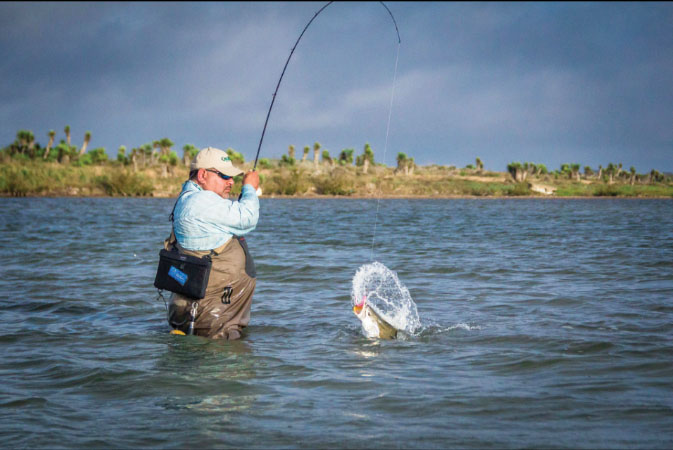 Trout like this have me very excited for what is to come!

Solid catching through November and early-December has me excited for the New Year. Tide levels are still unusually high so going to places that are inaccessible most of the year are now open to fishing and navigating–for how long remains to be seen. Cold fronts are dropping water temps down into the 60s post-front, and returning to the low-70s on sunny days between blasts. Overall, I rate the fishing better than I have seen in quite some time.

With this said, it reminds me of a comment at the dock earlier in the fall, "I don't see you fishing the old spots anymore." I responded, "Not with the boat traffic and fishing pressure nowadays. Fish are simply not holding in places they were four or five years ago." Take that as a tip.

When deciphering winter patterns, I see the Lower Laguna as an hourglass. Wider and generally deeper on the Mansfield end, narrow and shallower in the region of the Arroyo, wider and deeper again in the south near Port Isabel. During colder winter months I find that fish migrate toward the deeper ends, or at least where they can find warmer water.

Yes, Port Mansfield, Arroyo City and Port Isabel have their deeper holes, but what I'm trying to point out is an overall pattern for locating concentrations of fish during colder conditions. With Mansfield's and Isabel's generally deeper water, I focus on flats near these deeper-water areas when water temps are low. When I feel it's been warm enough for fish to venture to the backwaters and shallower flats, my choice is definitely Arroyo City.

The redfish have really turned on! They don't seem to be everywhere but the numbers are impressive when we find them. The fun part has been their willingness to take topwaters; Spook Jr. has been the ticket. A blowup is no reason to think they will not eventually smash the plug, just keep twitching it. Topwater action should hold as long as the water remains in mid-to-upper 60s. When it cools down, switch to the Paul Brown Fat Boys, Devils, and Soft-Dine XL. Of course the K-Wiggler Ball Tail Shad is a proven producer in all water temps; slower retrieves are the key to catching on really cold days.

Do you remember as a youngster walking the aisles of a toy store, so excited that you would have to visit the restroom? That's exactly how I feel about the prospects for big trout this winter. Preliminary results point look very promising, and the colder it gets the more concentrated and easier to pattern the bigger trout will become, especially in January and February.

Interestingly, we are not finding our bigger trout in their normal places so far this winter. Instead, we are fishing miles away from last year's successful locations but still catching quality fish. On warmer days, we are finding big trout up on the sand mixed with reds but these are usually loners. A more consistent bite of larger fish has been coming from edges of guts and abandoned channels along the ICW. Semi muddy, scattered-shell bottoms have also produced trout to seven pounds.

Trout limits have been easy to attain since the water temps dropped below the 70 mark. We have experienced multiple hookups within the group and bites on nearly every cast sometime during the day on numerous outings. The most consistent lures have been K-Wigglers in plum-chartreuse and flomingo, same ones the redfish love. You can be assured though, I have a full assortment of Paul Brown baits ready and we will be making the switch as soon as the weather cools down. Focus will shift to softer-bottom areas in general, working along ledges, spoils and deeper muddy flats. I view the prospects of many personal-best trout to be very good this winter.

I want to pass on a tip in closing. If your wading boots are getting kind of ragged or maybe you just want to try something new, Christmas has come and gone but maybe a late gift for you or a great fishing buddy, checkout Simms new VaporTread Boot in the saltwater series. After field-testing a pair for more than 400 hours, I had some input into the final design. By far the best boot I have ever worn! Comfort and durability surpass every boot I have ever used and I am very pleased to recommend them. Check them out on the Simms website, www.simmsfishing.com.

Best of luck in your chase for trophy-caliber trout this month.