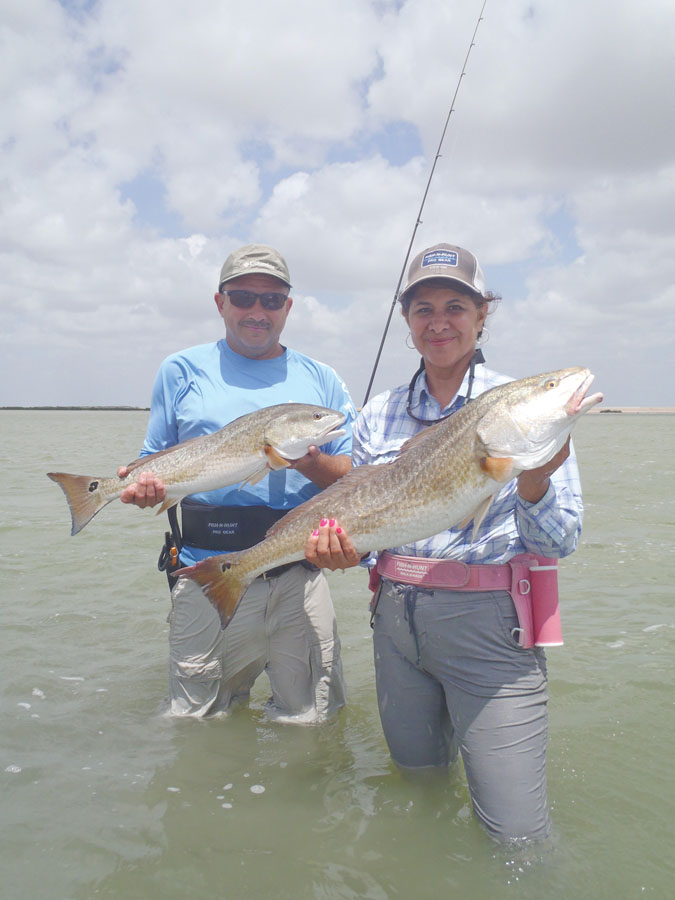 July usually brings schooling reds.
Fishing is an awesome sport but, how do you know if you have become addicted?

I was running a charter one day when my clients brought up Wicked Tuna, the TV show. They asked whether I had seen it and I replied that I had not but, from their conversation it was obvious they really enjoy it.

Three weeks passed and one evening at the gym, making a steady 4.9 mph on the treadmill, Wicked Tuna appeared on the screen in front of me. As the camera rolled and a rod at the stern bowed sharply, I reached with both hands to set the hook, and ended up on the floor.

Picking myself up, I looked around and of course everybody saw it. They all tried not to laugh but I knew they had to be cracking up inside. Had they understood the true cause of my fall I doubt they would have been so polite. Let's just call it addiction. Luckily though, it is this addiction that gets me through July's heat and fishing doldrums that are sometimes inescapable.

Looks like we could be headed into a normal summer pattern, not the horribly windblown experience of recent years. Calm water puts redfish on high alert. Any unnatural noise or a glimpse of movement will send them fleeing. Wind or no wind, I like to stop the boat a minimum of 100 yards from a target zone and quietly drift up or wade slowly forward. The basic stealth of this technique gives anglers a definite advantage in the shallow water game.

Thus far in June, with predominantly calm early mornings, I have been targeting skinny water redfish against shorelines and grass flats that contain a good amount of active bait. Believe it or not, an area with an abundance of stingrays also draws my attention. Not only to avoid stepping on them but also because rays feed primarily on small crustaceans and finfish; shrimp, crabs, small mullet and pinfish–the same as redfish. Find plentiful rays and find redfish, too.

I also like to fish skinny early in the morning during calm conditions because it gives me opportunity to perhaps see tailing reds. When redfish are tailing, rooting bottom with their head down, you can usually get close enough for a well-aimed cast. In this situation I prefer bone diamond KWigglers and sometimes 1/4 oz weedless gold spoons.

Our redfish catches have improved significantly with the recently light wind. Schools are still not common but cruising singles and pods have been more numerous in areas with lighter boat traffic. I will continue to target reds in this manner well into July, as long as the wind remains calm and we can find decent numbers. Of course a lot will depend on the boat traffic but when we hit it right it's worth sticking with it until midday.

When the shallow flats become too warm and the reds retreat to deeper water, we will work toward thigh-depths and switch often to topwaters. I have recently been using Bagley's new Rattlin' Finger Mullet with good success and have been impressed with the durability of their finishes. The design of the plug allows long casts and the reds seem to like the rattles. Their "hammer finish" gold spoons have also been working well for us.

Trout numbers remain steady with limits or near limits on most trips. Topwaters have given rather limited success but the KWiggler Ball Tail Shads never vary. Plum with chartreuse and Flomingo have been great producers. Late evenings have been providing good action under birds. Moving tide and enough wind to ripple the surface have been the keys to getting on fish. I'm usually on hard sand, shell and slightly muddy bottoms this time of year with potholes in solid grass also being favorites. The preferred depths have been thigh- to waist deep early, belly- to chest deep as the day warms up. Lots of little trout around so try to be careful in your handling and releasing.

As hot as summer can be, make sure to cover up as much as you can and use good sunscreen on exposed skin. For years I sported that raccoon look but now I don't dare leave without my Simms sun hood. A good pair of polarized sunglasses is always very important; they not only protect your eyes from harmful sun rays but they also allow seeing fish with greater clarity.

However your fishing addiction afflicts you this summer, enjoy it to the fullest and try not to have a "wicked fall" before fall comes around!