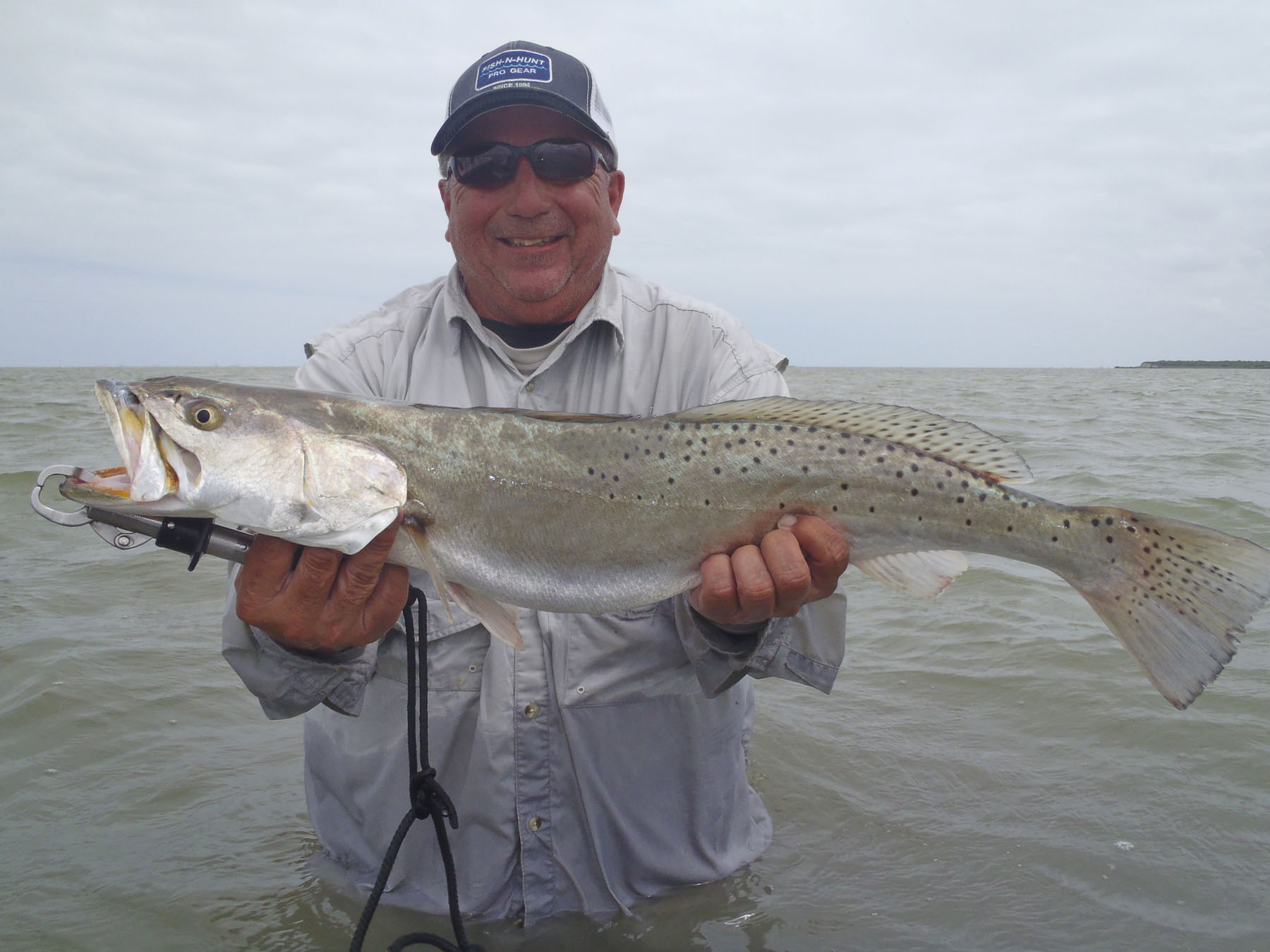 Ernie Perez landed and released his personal best recently―29-inches!
It was a beautiful weekday morning. Low clouds blanketed the sky, boat traffic was lighter than normal, and the wind was light as well. The beautiful conditions had our expectations running high. A few mullet flickered ahead as we began our first wade and that added to the anticipation.

Twenty minutes into it, after a few misses, the first solid fish was landed. Then another, and some fantastic "Wow-did you see that?" blowups. But that was itback in the boat and off to another promising spot. Moving was a good decision and by the end of the day we were able to pull out several 5 to 6-1/2 pound trout and some feisty slot reds on K-Wiggler ball tail shads.

As good as all that sounds it has unfortunately not been the standard day of fishing here lately. The wind has been giving us fits and the boat traffic already looks like mid-summer.

Over the last couple of years I have seen the fish changing their patterns significantly on the Laguna Madre. Boat traffic has grown to the point that fish do not tend to stay in one particular area very long. Fifteen years ago you could stay on a school of fish for weeks or a month at a time. Now, fish get so much pressure that they seek shelter in deeper water or less crowded areas. On our most successful days we have had to grind it out into the afternoons, waiting for boat traffic to lighten up, and the bite to come back around.

High tide levels have moved lots of redfish up into very shallow water. It's been best to target them in the early morning hours as the sun rises and before boat traffic scatters them to deeper. You can almost bet though, they'll be right back in the same place the next morning.

Redfish have been taking topwaters fairly regularly in the shallows and when they move deeper on us we try to follow with K-Wiggler ball tails, plum/chart and pink flomingo. Generally, a slow retrieve works best when they go deep but a good trick is to insert a small piece of solder wire into the bait. This allows a moderate to fast retrieve while staying lower in the water column and the K-Wigglers really dart and dive erratically when you speed them up. Try it in a swimming pool and you will see what I mean. Bottom line to catching reds right now is to find shrimp and smaller baitfish active in shallow water, the farther away from traffic the better.

Trout fishing has been improving and they are becoming easier to pattern with the increase in water temperature; actually easier than reds the last week or so. Bigger trout are showing more consistently and we are seeing at least one at five pounds or better on every outing. Multiple five-to-seven pounders are not out of the ordinary.

Trout have been holding in potholes over grassy flats areas and topwaters have been effective when bait has been visible on the surface. I expect the water temperatures will rise quickly with the approach of summer and I look for them to begin staging deeper long about midday. As they move to deeper water they tend to lay low and not move as much. This is when our tactics change to a slower retrieve with plastics near the bottom of the water column.

A good bet for midday and afternoon trout action is to target deeper green to sandy-green water. The edges of these color changes can be your best summertime producers and we see the changes occurring anytime the wind begins to move water over sandy bottom and especially when the tidal currents are running near their peaks. Early morning, head for the lines where the sand and grassbeds meet on the east flats. These same areas can be productive when a standing high tide breaks over to outgoing.

This summer is looking to be the busiest ever from my observations at the boat ramp. Use extreme caution out there and practice your best courtesy skills while on the water. With the summer heating up you will without a doubt need a good pair of sunglasses. I do not believe you can buy better glasses than Costas. I recommend getting on their web site and looking for a pair that fits well and most definitely has side shields to allow minimum light to penetrate from behind the lenses. I also suggest the 580G (glass) lens for superior clarity. They become very useful in sight-fishing and absolutely worth the investment.

Whatever fishing you do this summer; stay hydrated and be safe. And may you catch a bunch.