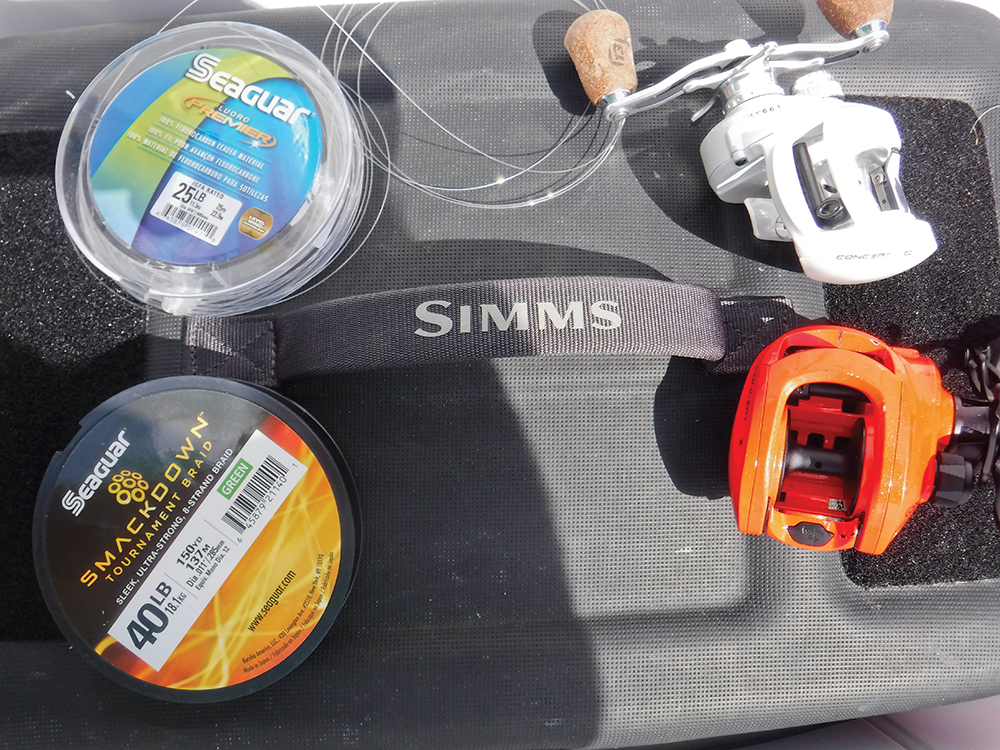 Recommend spooling your reels with Seaguar Smackdown Tournament Braid and their Fluoro-Premier for leader material.

I cannot recall ever being so anxious for June…I’m just so sick of spring wind!

The wind during nearly all of April and now the first week of May has been just dreadful. And, because of it, the fishing has been inconsistent and unpredictable. We’ll no sooner have a decent day and the next two or three are blown out. The wind finally gives us a break but the fish we were on are gone.

Erratic doesn’t begin to describe the fish patterns we’ve been trying to unravel. Even with specific knowledge of “normal” local movement patterns, tide predictions, solunar feeding periods, lunar cycles, etc., we are struggling to find a consistent bite of keeper fish on most of our trips. For the past month it seems that only one out of five trips is a good day. If we could somehow take the wind out of the equation, I believe the lure anglers would be enjoying great days because our fishery is very healthy. Fishermen who use bait are doing much better but that is a whole other discussion.

So, looking into June, I'm praying that summer weather will set in and the daily wind will lay down, at least below 20 mph. Count on the days being longer and hotter, and keep that in mind as fish begin to stage deeper in general, especially during the hottest times of the day. Early mornings and evenings will be ideal periods to find fish most active during daylight hours.

I would also like to point out that, as of this writing, I have yet to see the amount of bait present in our bays as we are accustomed to observing during May. I expect this will change very soon as the bay waters warm and increasing numbers of menhaden and mullet migrate through the passes from the Gulf.

As we saw last year, redfish numbers again seem to be lower than normal this spring. I say this not only because we are catching fewer, but also because I’m seeing fewer on the flats. Yes, there are some schools here and there and we bump into scattered reds during our wades. Looking at the whole Lower Laguna, from the Land Cut down to Port Isabel, the numbers are just not there. During the past two months, I can count on my two hands how many times we have run into small schools of redfish and just flat out caught them.

The most consistent redfish sightings have been on the east side of the ICW. However, given the prevailing water clarity on that side, it’s no easy trick to sneak within casting distance, let alone get them to take a lure. I do expect the numbers to improve as our winds lay down, weather stabilizes, and our bait schools return to our bay system. Gold spoons, Super Spook Jrs, KWigglers Willow Tails and Ball Tails on 1/8-ounce jigs, will be the lures to throw at them.

While redfish action was also slow at this time last year, the consistent trout bite andsize of trout we caught more than made up for it. This year is a different story. The trout bite is not quite as slow as the reds are at present, but it's certainly not near the quantity or the quality we experienced last year.

Spoils, the deeper water along the ICW, and associated guts and channels, have been our day-savers lately. Again, the bait is not nearly abundant or congregated so far this spring to attract the number of fish we are so accustomed to seeing and catching. To increase your chances of catching trout this month, focus on moving tides, fish early, and fish late. You should begin to see slicks popping pretty regularly, so keep your eyes and nose in tune to cash in on the action. Topwaters will be an excellent choice to draw explosive strikes on the surface of waist-deep and shallower water.

Flounder are beginning to show in drains and channels but our catches remain mostly incidental, mostly on the flats. Snook fishing is showing great promise with numerous specimens longer than 30-inches and lots of others just a bit shorter.

Here’s a tackle tip I would like to pass along. Having used Seaguar Smackdown Tournament Braid several months now, I find it to be excellent in several categories – thin diameter, exceptional strength, and easy to untangle if you throw a bird’s nest. Seaguar is also recognized as the originator of fluorocarbon line and I find it be excellent for leader material.

Boat traffic is definitely on the rise. Use caution and be courteous on the water. Best fishing to you!