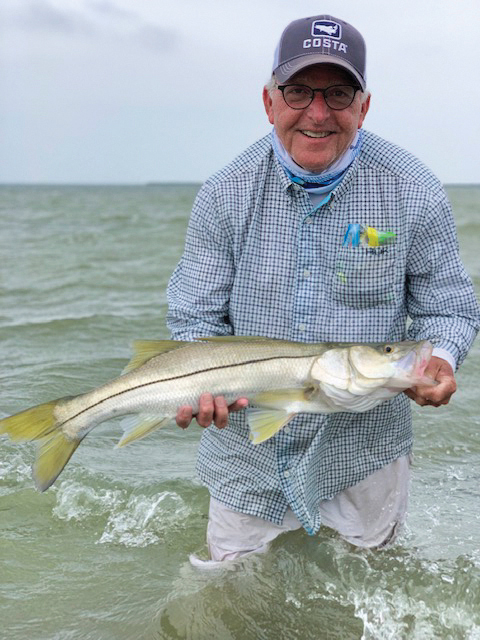 Bill Adams scored his first snook on a recent charter.

Summer is here and a lot lies between the letters s and r in that word. For starters, the sun is about to get blazing hot. It will feel even hotter as winds become generally lighter in June. For the r, water temps will rise to the upper-80s as afternoon air temperatures approach 100°. Boat traffic will increase dramatically and so will the fishing pressure. Fishing tournaments will be held every weekend. We can only hope our catching will be as busy and hot.

Fishing will generally improve compared to the spring months as lighter winds open the playing field. In recent weeks we have been noticing shrimp moving through the ICW. Trout and redfish drive shrimp to the surface where flocks of gulls hover to snatch easy food. Trout action for anglers who drift within casting distance can be fast-paced. Mostly small fish, but there will likely also be enough keepers to keep it interesting. Larger trout tend to hold lower in the water column under birds; slower lure presentations can aid in finding them. Fishing working birds can be productive throughout summer.

I mentioned that the winds would lay in June, some mornings will be slick-calm. Wakes and mud boils made by redfish fleeing boat noise in shallow water are a dead giveaway. On the flipside, they’ll likely be spookier and harder to target. Experience has taught me that larger schools will settle down and resume feeding sooner than singles and small groups.

Anglers in the practice of keeping fishing logs have probably noticed that redfish seem to favor certain areas year after year – so long as tide, water clarity, and bait availability are favorable. If you are not into keeping a logbook, your next fishing trip is the best time to start. I make daily log entries and refer to them frequently to assist in patterning the fish.

Redfish are known to seek deeper water when boat traffic is heavy and also when water temperatures reach summertime highs. We might not be able to see them in deeper water but their habit of grubbing soft bottoms while feeding can tell us they’re there. Look for murky zones, maybe the size of a swimming pool, amid generally greener water. Maybe not a surefire method, large mullet and black drum do the same thing, but thinking outside the box can sometimes pay solid dividends.

My go-to list of redfish lures includes weedless gold spoons in grassy conditions and KWigglers plastics. I really like the Ball Tail Shad in Plum-Chartreuse and the Willow Tail Shad in Lagunaflauge and Mansfield Margarita.

We have enjoyed an exceptional run of large trout in recent weeks. Unfortunately, even though the lengths and some of the weights have been impressive, the weights have declined in general now that they are spawning.

Bigger trout have become scattered. This is evident by the fact that we are finding them only in ones and sometimes twos, whereas we were able to achieve multiple landings in certain areas several weeks ago. Like redfish, these big trout have withdrawn from the crowds and noise. Isolated spoil banks, shallow sandbars and potholes on flats away from busy travel lanes have proven most productive. Common themes in large trout landings have been large concentrations of bait in the area and numerous fresh slicks.

Topwaters have been taking a good number of bigger trout but floating grass makes it a losing game in many areas, unless you rig with single hooks. When the topwater bite fades we rely on KWigglers plastics – same styles and colors we throw for redfish.

Nice flatfish surprise in recent weeks. Flounder in considerable numbers have evidently completed their spawning run and found their way back to the Lower Laguna. Ledges along the ICW and old oilfield cuts have been holding enough flounder to actually target them. Small plastics fished slowly along the structure is probably the best technique. Carry a net. Landing one without a net would be like me hitting a homerun in the bottom of the ninth in Game Seven of the World Series.

Historically speaking, fishing will be good this month, but quarters will be tight as there will be lots of activity on the water. Fish moving tides as much as possible, watch for slicks, and keep an eye on water temperature to determine the desired depth. I will end this article saying that proper etiquette will be of utmost importance on the water and also at the launch ramp. The busiest season of the year is upon us – be a good steward of the resource and be kind to your fellow anglers. Tight lines and try to stay cool.