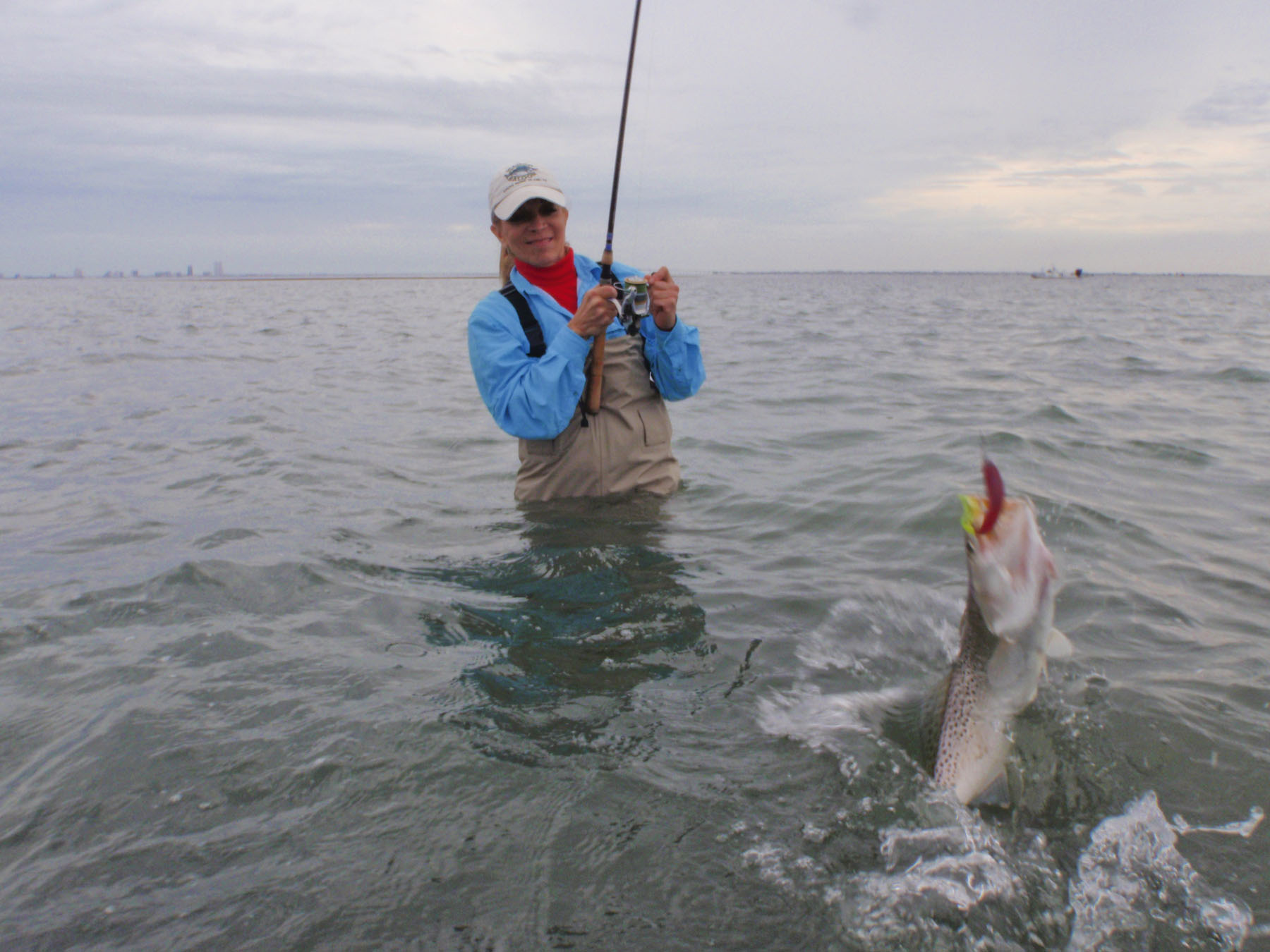 Elva's first-ever wade was a productive one.
I know that everybody sits on pins and needles waiting the arrival of spring, but wrapping up the best winter fishing season I have ever experienced is actually kind of sad for me. Even with bone-chilling cold, nasty sea fog, and frequent northers; my clients and I have been blessed to enjoy phenomenal fishing over the past several months. Like it or not the seasons are changing and spring is about to bust wide open here on the Lower Laguna Madre.

Our biggest challenge in the coming month will be finding "fishable" water that will "hold fish" in March's infamous winds. My plan will be to hit the areas most vulnerable to wind early in the day and then head to protected shorelines, back sides of spoil islands, and areas with lots of grass where clarity will hold, later in the day. We have many areas on the east side of the ICW that will fit the bill even in 30+ mph wind.

This past winter we experienced some of the lowest tides I can ever recall which was great for mapping bottom structure. I found sandbars, short stubs of PVC pipe, and lots of other "trash" I never knew was there. The good news is that this month will bring higher tides that will invade our shallow grassy flats. Along with the tides will come new sea life that will attract the predators. March marks the beginning of large schools of mullet roaming shorelines and shallow flats. Blue crabs will again appear on flats that were nearly dry during the winter months. We'll still be in waders but the water will warm enough to see a consistent topwater bite. My favorites will be the Super Spook Jr in bone, red head, and custom pink (that a friend makes for me) along with the hot pink Skitter Walk. All of my topwaters will be rigged with single Gamakatsu "Live bait hooks W/Ring" in 1/0 or 2/0 for small to medium size topwaters.

March will also mark the beginning of some bird action along the Laguna's western shore from Port Isabel to Port Mansfield. Gulls will tend to hover above tailing redfish as they gorge on tiny brown shrimp in shallow mud flats. Do not be surprised to find trout mixed with reds, big ones too. This time of year every predator in the bay is ready to dine on those tender young crustaceans.

If the fall of 2010 was any indication of what the bird action will be like this spring, we are in for some exciting tailing redfish action.

When we are not throwing topwaters, my go-to will be Kelly Wiggler soft plastics. My favorite colors are plum-blue metal flake/chartreuse, pumpkinseed/chartreuse and natural two-tone/chartreuse. If you haven't already noticed, I am a big believer in chartreuse tails on my soft plastic baits.

We look forward to the prospects of landing those spotted silver logs (trophy trout) that like to roam the shallow banks and flats during early spring. Trout will begin to show big old potbellies full of roe while still carrying their winter shoulders to the delight of anglers hoping to land a personal best specimen. If chasing trophies is your greatest passion, you really need to study the tide charts and solunar tables for the next three months. As you study, mark your calendar and target the days and times that indicate the best opportunity. As the spring weather pattern develops later in the month, sow trout will begin to take full advantage of the stronger tidal currents (especially during new moon and full moon periods) for their feeding and also their spawning activity. By late March, water temperatures should stabilize in the mid-60 range with warmer afternoons on the flats possibly rising to 70. This will trigger the type of feeding you won't want to miss. A late-afternoon outing during the last week of the month as we head toward new moon could greatly increase your chances for a trophy if the weather cooperates.

Despite the nuisance and uncomfortable windy conditions that are always a big part of the picture in the month of March, mark my words, there will be plenty of fish caught and a true wallhanger could come on any cast you make. The Houston Fishing Show will take place March 2-6 at the George R. Brown Convention Center. I will be working in the Fishing Tackle Unlimited booth Thursday, Friday, and Saturday; please stop by to say hello and let me show you the FTU Green Rods. I think they are the best in Texas!