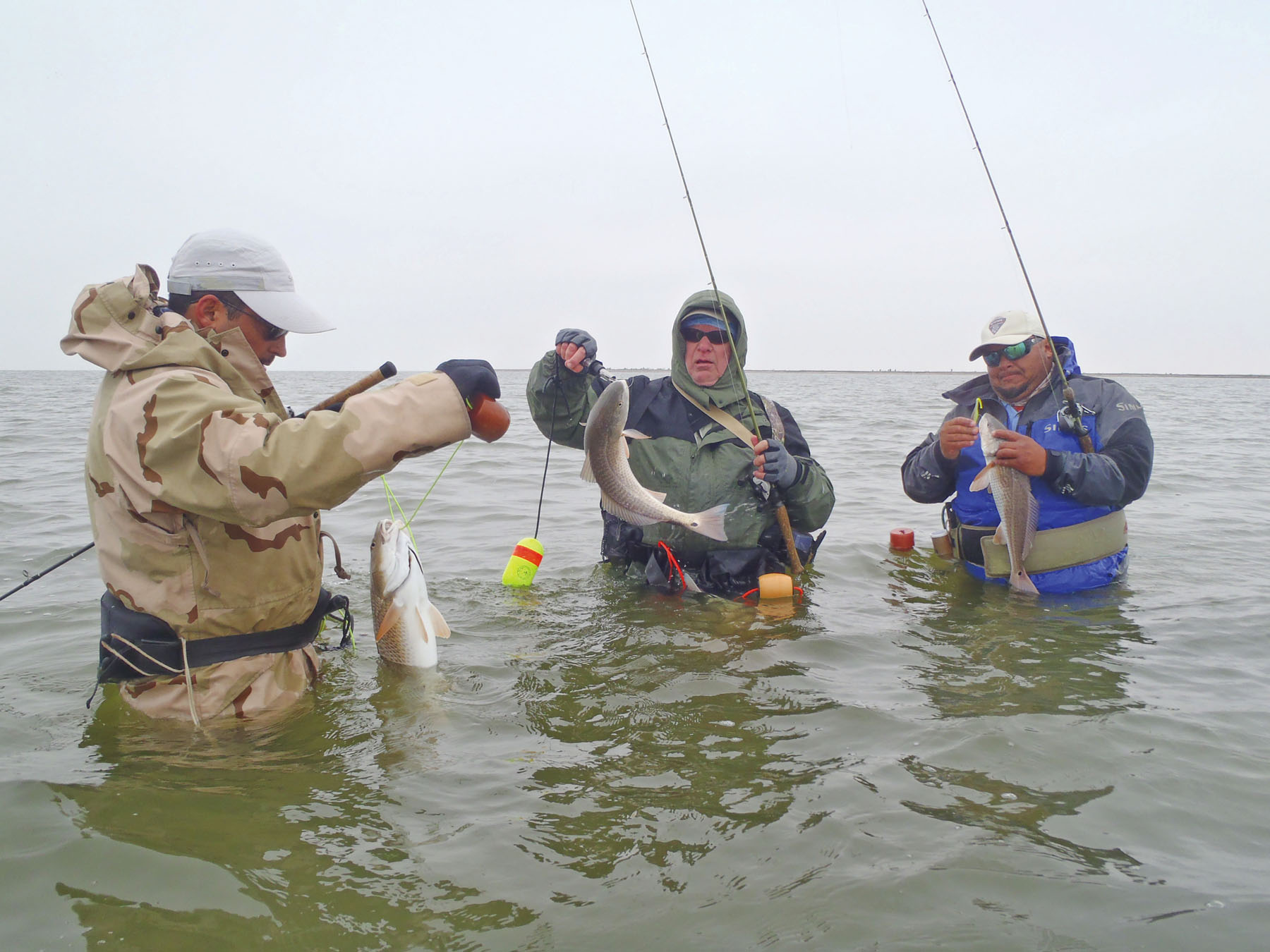 Mark, Dale and Capt. Ruben Garza braved the bitter cold and got into some red hot action.
I wish my optimism for our spring season was as high as last month. My outlook has nothing to do with the state of our fisheries, I believe we have lots of good fish. It is water quality that troubles me.

Over the past weeks I've been noticing a streak of tea-colored water that runs from a couple miles south of the Mansfield East Cut, along both sides of the ICW, all the way to the old causeway at Port Isabel. Another source of concern is open bay dredge spoil disposal from the ICW maintenance project north of Port Isabel.

Our grassbeds took a real beating during the great freshwater floods of 2010 and they're just now showing signs of recovery. Between the tea color of the water and the murkiness the dredge has created, I fear the grass could be dealt another setback. I am hoping that when the bigger tides of March roll into the bays we will see improved water quality all across the Lower Laguna.

Redfish catches have been rather spotty when the water temp dips below the 50 mark. During colder periods our flats have become almost void of life; so much for finding schools of reds in the shallows. On the upside, our shallow flats warm up very quickly. As soon as the water temp nudges above 50 they'll ease back up and stage in the potholes again, but they're not always anxious to eat until they warm up. Late afternoons have been the best times. Just drag a plum-chartreuse Kelley Wiggler slowly through each pothole and hope. That's what we're doing. If you hit it right, meaning 55 or warmer water, like we had one afternoon last week, you'll have much better luck. We caught fifty-two reds and I lucked out with a 30-inch trout!

As far as trout catches go, I would have to honestly say our numbers and size of trout are below average so far this winter. I believe we have the fish, so I'm blaming the cold for pushing them into water that is too deep for wade fishing.

Right before the most recent series of cold fronts we were catching great numbers of trout in many areas but the fronts so close together and the plunge in water temperatures have changed their hiding places and eating habits. The good news is that we have seen a glimpse of many undisputable trophy trout in shallow water during warmer periods that would excite any trout enthusiast.

Muddy bottoms seem to be where most of our trout catches are coming from, and again, a slow retrieve using Paul Brown Corky Devils or slow-sinking Fat Boys are at least enticing some strikes, even if half-heartedly. Kelley Wiggler's in natural colors have also helped us catch good numbers, when the conditions are favorable.

Spoil banks, channels, flats near deeper water and even the flats east of the ICW have had some good numbers of trout for a while now. It's exciting to anticipate that our big trout will move into the shallow flats to spawn soon, and this annual event definitely increases your chance of getting your hands on a true wall-hanger fish.

In March we will begin to see our southerly winds returning with force and hopefully help clear our bays with clean-clear gulf water. Once our bays start to clear up I look for our fishing to greatly improve this spring.

March also brings about an event that I always look forward to every year, and that's the Houston Fishing Show at the George R. Brown Convention Center. The dates this year are March 5 thru 9.

For the past several years I have benefited greatly through my association with Fishing Tackle Unlimited and I want to thank Joe and Danny Meyer for their contribution to my success in the guiding business during that time. But time moves on.

I am proud to announce that I have just recently joined with CastAway Graphite Rods and Fish-N-Hunt Pro Gear and I will be representing them at the Show. These are two great companies that have earned a solid reputation for the quality of their products and customer service in the Texas fishing industry. So come by the booth to see their products or to simply say, "Hello." Good fishing to you!