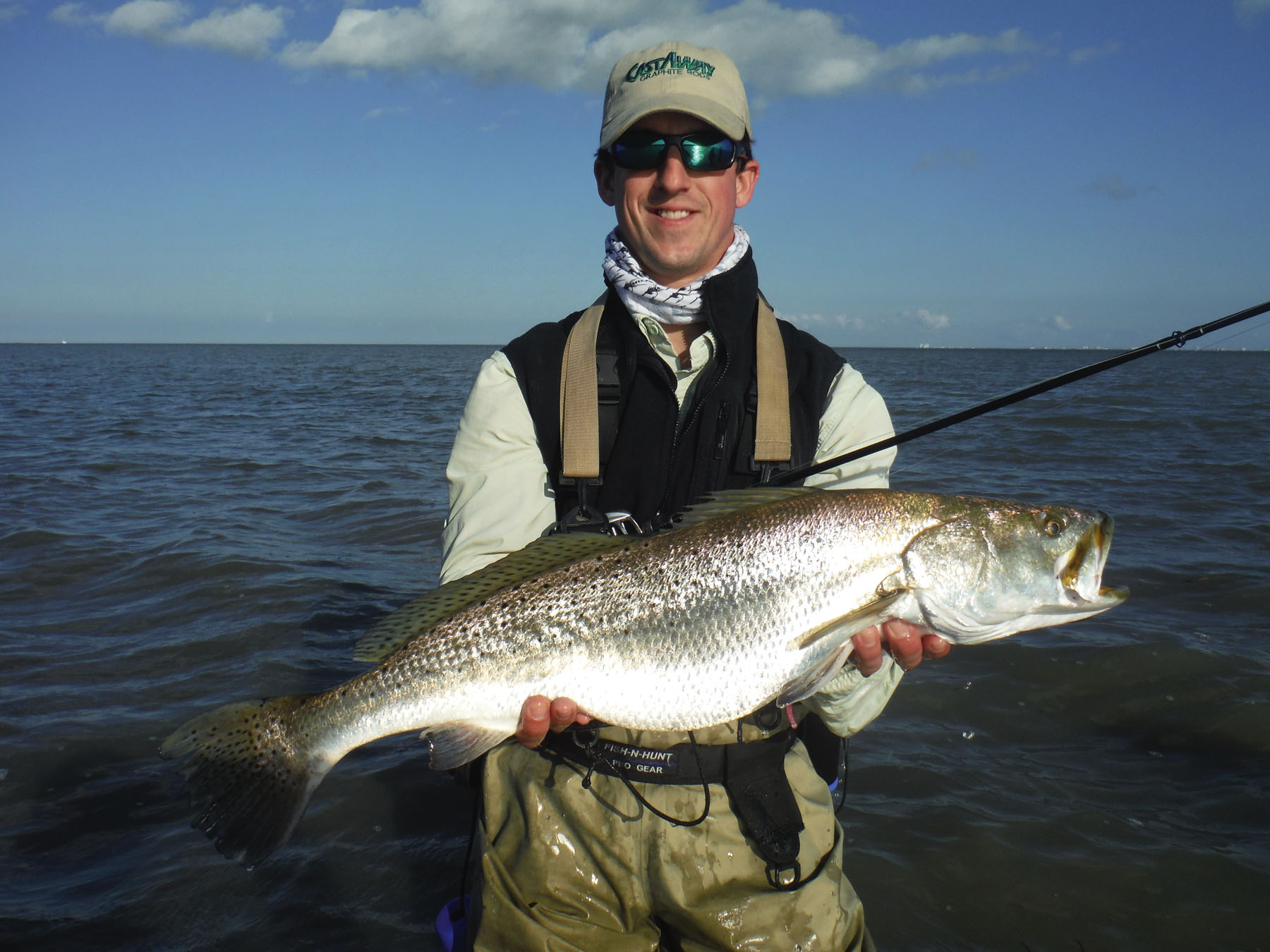 Paul displays his personal best 8 lbs and one of multiple trout he caught over 7 lbs in a two day stretch.
I am writing with mixed emotions. On one hand I hate the thought of winter fishing season leaving so soon. It seems just yesterday I was writing how excited I was for the colder weather to arrive. Bundling in layers of Simms gear to ward off the numbing ache of February's misty mornings, dreaming of trophy trout. But on the other hand, even with weather that has been consistently what I would term "fishable," we have not caught nearly as many large trout as in years past–so far anyway.

This is not to say they were not available, and this is the greatest source of my frustration. During late January and early February I believe I have seen more large trout than ever before on the flats. I'm not talking scattered singles and small groups of three or four; I'm talking schools of trophy-class fish! Getting them to bite has been the challenge, even with very little boat traffic and almost no fishing pressure. Fishermen love to lay blame, so I'm blaming consistently too-clear water.

Have you heard the saying, "We threw everything but the kitchen sink?" Well, that's us lately. We have tried topwaters of all sizes, everything in the MirrOlure-Paul Brown Corky lineup, soft plastics or every description and other lures too many to mention. We have enjoyed days filled with lots of "keepers" but relatively scattered big fish results. Certainly not the results February has been known to deliver. My hope now rests in what lies ahead.

March will bring increased tide levels and rising water temperatures, and of course a lot of wind. Having already witnessed the abundance of trophy trout, the thoughts of longer feeding periods due to rising water temps and wind-stirred flats (to add a bit of color) should add up to much improved catching conditions.

My game plan will include earlier starts, and when necessary, fishing late into the evening. Fish of the caliber we seek this time of year are known for low-light feeding, especially in clear water.

Getting trophy trout to eat in clear, shallow water is never easy but neither is it impossible. The Zara Spook Puppy topwater will sometimes draw strikes when other floaters get ignored and dragging a weedless K-Wiggler Ball Tail Shad slowly through grass has been known to fool finicky trout. Another trick is to remove the hooks from a Spook Jr and trail a fly on a 10" leader. On many occasions, when I knew they were there because I had seen them, camping out all day and waiting for the evening low-light bite was the only way they'd take a lure. This may not be for everybody; it depends how serious you are about catching a trophy fish.

Our redfish have finally showed up in very good numbers and we are catching them very easily at present. Early- to mid-morning we have been finding them relatively shallow, around knee to thigh deep, hunkered in potholes on the flats. Depending how early the sun comes out they can be a bit slow to bite. Once the flats begin to warm, soft plastics on 1/8 jigs have been the ticket, working the lure to the edge of the pothole and then slowing it to bounce along the sandy bottom. A bonus has been finding some very nice trout mixing with these pothole reds.

With the coming of March and the seasonal rise of the tides, back-bay shorelines will once again come into play. Redfish will begin roaming and prowling grass flats that were nearly void of water during the low-tide days of winter. I expect them to become a bit more scattered than currently but hoping we will still be able to pattern their movements and feeding.

When comparing our current fishing to last year's results during the same time period, I can say that the current situation and forecast holds much greater promise in my eyes than it did last year. There is no longer any channel dredging taking place, so our water looks to be in great shape. Keep in mind March's infamous south wind and plan your fishing efforts accordingly.

In closing, I would like to thank all of my sponsors, without them I would not be having as much fun pursuing my passion all these years on the water. Here's a shout out to: Texas Saltwater Fishing Magazine, CastAway Rods, Fish-N-Hunt Pro Gear, Simms Fishing Products, Power-Pole, K-Wigglers, MirrOLure Paul Brown Originals, Costa Del Mar Eyewear, Coastline Trailers, and Tony Clips.

May your spring fishing be the best ever.