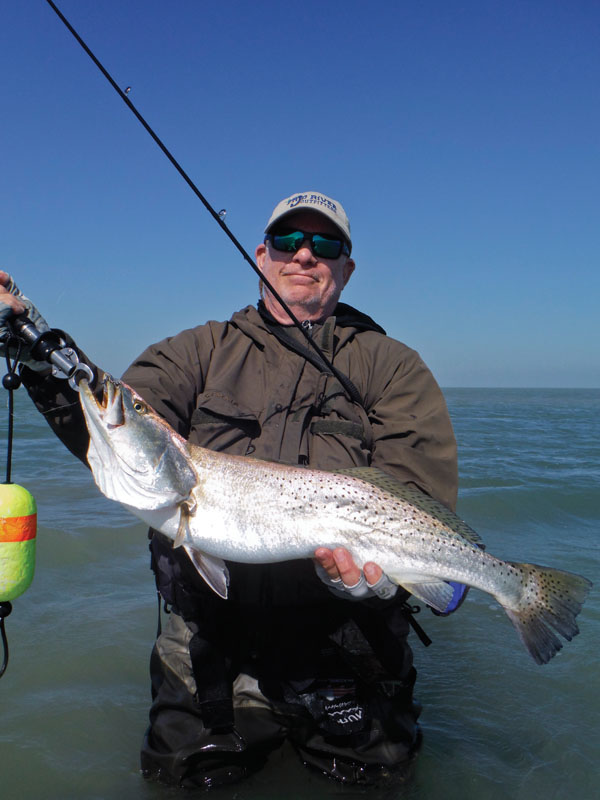 Soon after Mark's catch, Dale Raabe followed with this one!

I got a rare chance recently to go fishing by myself, until a longtime friend decided to join me for a quick evening trip. We hooked the boat and sped off to catch the last hours of daylight, my buddy talking smack all the way. He was going to catch the most and biggest, and that he had pretty much taught me everything I know. I just wanted to relax and enjoy my time on the water.

Honestly, I began to feel that had we not been in the middle of nowhere I might have told him to get out and hitch a ride home. He's been a good friend for many years but believe me, he has done worse to me, in the name of fun.

Arriving at our spot, I took my time getting ready hoping he would take off on his own, and eventually he did. But before getting in the water he asked which direction he should go.

I wanted to stay shallow, so I told him, "Why don't you try the deeper water?" Off my self-proclaimed teacher went. I did not go but a short distance and stayed there the whole time. My friend went on a marathon, glancing back every few minutes. I was in fish immediately but kept it hush-hush, not wanting him to see, keeping my rod low and releasing eight reds and three trout over 24 inches before the sun went down.

I picked him up, barely able to see his silhouette in the fading daylight. He quickly asked, "What'd you catch?" To which I laughed sarcastically and replied, "Not a thing. How about you?"

He replied, "Man, you sent me on a wild goose chase. I only caught one undersize redfish." I couldn't help it, my laughter boomed louder than my outboard. He was pretty quiet on the way in.

Have you ever felt as if you're on a wild goose chase? I know that most fishermen can't get out as much as they would like due to work and other commitments, but it is possible to figure fish patterns even if your time is limited.

The key lies in being in tune with conditions and constantly alert to what's going on around you: tides, weather, and water temperature. To learn gamefish behavior you must be observant of bait activity. Focus on the slightest changes in bottom structure and study your solunar table. Most importantly, a prayer to the Man Upstairs always helps.

On that trip with my buddy, I just didn't decide right then and there where I wanted to fish. I had done my homework, researched the tides and feeding period, wind direction and water temperature. Once there I liked what I saw, lots of bait flickering over potholes, and headed directly toward a slight depth change. My buddy just hopped off the boat with no clue what was in plain sight.

Fishing has been very good as long as the wind isn't blowing over 25 mph. Winter has been mild except a few mornings when the water temperature dipped below 50 but warmed quickly into the 60s once the sun came out. Our water is in great shape, and generally speaking our bait schools never really disappeared. We experienced extremely low tides in late-January and early-February, perhaps the lowest I have ever witnessed. Hopefully in March the northers will come less frequently and the tides will recover. But it will definitely be windy!

Our trout and reds have remained mostly shallow with the milder-than-normal weather. Even during the coldest periods they were soon back on the flats. Topwater baits will soon be getting more playing time and when the fish refuse to feed on the surface we'll be quick in breaking out the K-Wigglers. Do your homework. March, April and early-May is when the bigger trout will be their heaviest.

Redfish continue to be in abundance near and north of the Arroyo Colorado. I will say they are much easier to find compared to last year and I am hoping this trend will continue into the spring.

I am happy to announce that not only will I be rejoining Fishing Tackle Unlimited as my major sponsor; they have also signed my son, Capt. Aaron Cisneros. I look forward to working, seeing and hanging out with old friends at the Houston Fishing Show. Come by the FTU booth and say hello to Aaron and me and the rest of the FTU Pro Staff. I am planning on being there March 18 through 20. In the meantime, be careful not to end up on some wild goose chase!