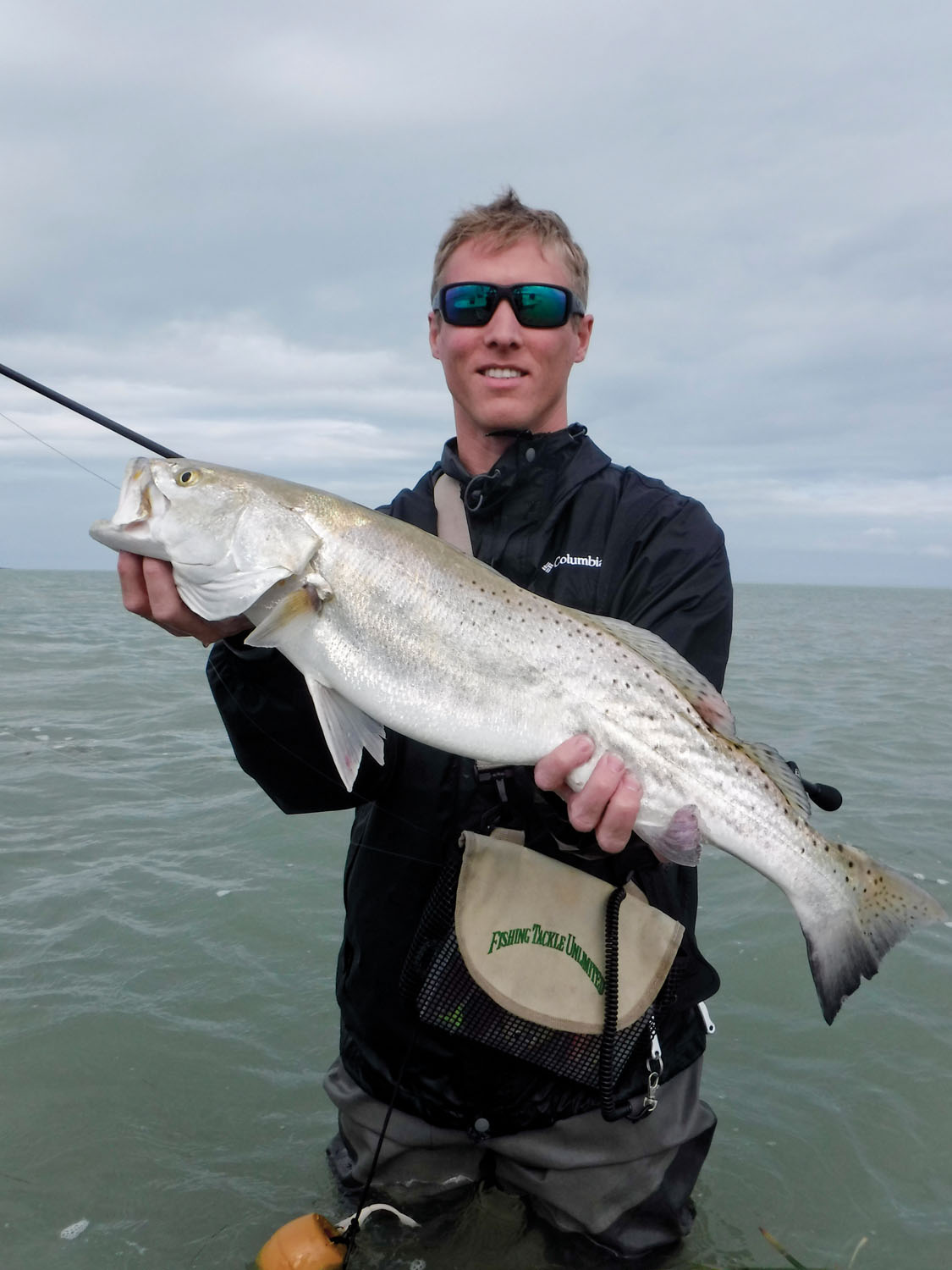 Colin displays his big trout of the day.

Taking a break on the boat recently with a longtime client, our conversation turned to my Empty Stringers catch and release program. He is very conservation-minded and has participated in the program since the beginning. He was amazed when I told him we have released 1,185 keepers (mix of trout, reds and flounder) in the past eleven months. After a short pause, he said, “Ernest, the total is probably much larger. Think how many millions of eggs those fish produced after being released.”

That's when I realized the potential impact Empty Stringers could have on our fishery. March 1 will mark a full year since I began offering this catch and release incentive and it has become quite popular with my clients. I give great credit to the sponsors who have supported this conservation effort: Fishing Tackle Unlimited, Simms Fishing, Shallow Sport Boats, K-Wigglers and Costa del Mar. Special thanks also to the many anglers who released their catches to help improve our fishery. I am very proud of every one of you!

Moving on: When I think of March, my first thoughts are changes in primary weather patterns. Cold fronts remain a possibility but will lack the punch they delivered in January and February. Strong southerly wind will dominate and we should see fewer days of high atmospheric pressure. The wind will dislodge large amounts of dead bottom grasses that will float on the surface and suspend in the water column. Some very good fishing locations will turn the color of chocolate milk.

We deal with this scenario every year so it's just a matter of changing the game plan based upon what Mother Nature delivers.

Redfish remain plentiful and I am hoping this will continue into spring. Higher tides recently have given us good numbers of reds on sand flats east of the ICW. When tides recede, they show preference for deeper grass beds pocked with potholes, cuts between spoils, and other natural funnels. As the water warms up this month, we should see the prelude of a topwater bite that has been almost non-existent for months. My fishing the past four months has taken me as far north as the Land Cut, all the way down to Port Isabel. We have not been seeing large schools in any particular area, but enough places are holding sufficient numbers to provide steady action.

The quantity and quality of the trout we have been catching has been loads of fun. Lately, it seems at least one angler per charter group lands one or more in the four to six-pound range, sometimes we are all blessed with fish that size. The weather has been very mild on average and I do not expect to see much of a change heading into spring. In past winter seasons our efforts were concentrated over deep mud and shell for trophy fish but the milder conditions have led us to spend more time over sandy grass flats with potholes. Like the weather, I do not expect much of a change in their preferred structure type. The same as the redfish, trout have been staging in deeper guts and channels on the grass flats during low tide periods.

Most of the trout are seasonally very heavy for length this time of the year, and it will not be long until the mature females will have bellies full of developing roe. Depending the prevailing water temps, the full and new moon periods in the second half of March can produce the first spawning activity during two-tide days here on the Lower Laguna. I'm a firm believer in conservation, and as these fish prepare to spawn in the coming months, if you do not want to practice full catch and release, I strongly encourage keeping only a few for a meal. It's up to us individually to make a difference for the future of our fishery.

The Houston Fishing Show is always a March highlight and this year’s event will be held March 8-12 at the George R. Brown Convention Center. Fishing Tackle Unlimited goes all out for this show with the largest exhibit of tackle, clothing and related gear in the hall. The FTU Pro-Staff will be in attendance, including yours truly, so please come by and visit. K-Wigglers’ brand new Willow Tail Shad will be introduced in the FTU booth and has been a proven big trout producer during field testing. I am excited to see old friends and make new ones.

Best of fishing to you!