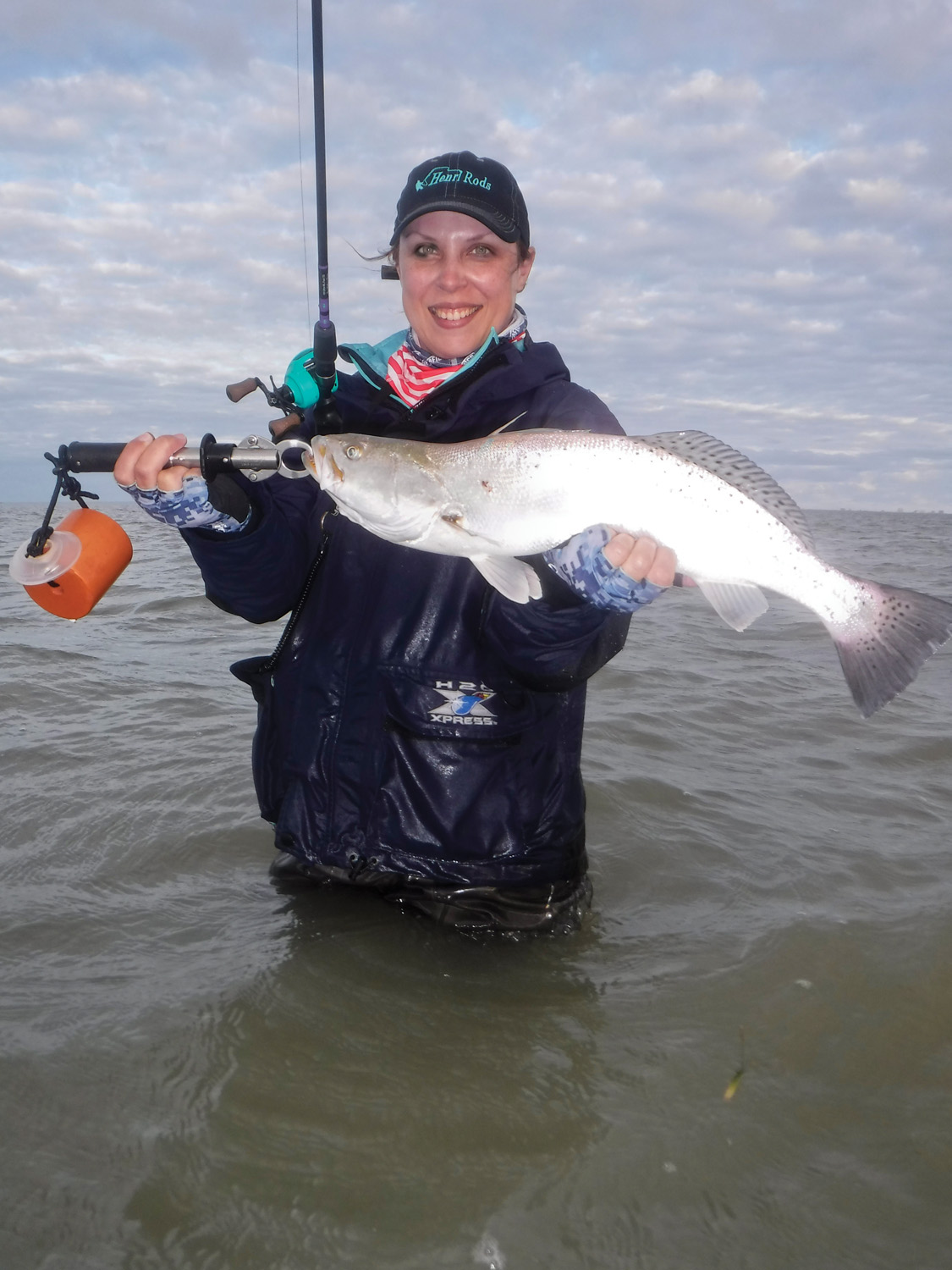 Kristin Faulk with a great winter specimen that took a KWigglers Willow Tail.

Last month I mentioned that timing is a critical aspect in locating and staying on fish. The exceptionally cold weather over the past several weeks has made it even more critical.

During warmer winters the past couple of years, fish did not leave the flats for more than a day or two to escape the cold. I learned something new this winter. Following each cold snap, I searched the flats endlessly, targeting the deeper guts that always produced under similar conditions, with little luck. It finally dawned on me that with the water so cold for so long, those patterns simply did not apply.

One day, determined to find where they were holed up, I made a discovery. The water temperature was a cold 46⁰ with bone-chilling 51⁰ air temperature, and drizzling. I picked a spot adjacent to an exceptionally deep hole that measured twenty-seven feet. This 200-yard, hard sand flat was right along the edge of the ICW. The water was colder than anything I have ever caught fish in but it proved to be a gold mine.

We had to let our Corkys sink near the bottom where it was about five feet deep. After a few twitches, a very slight tap was the only indication of a bite. Mastering the technique gave us a fish or a strike on every cast.

After releasing something close to fifty keeper trout, I recovered from the tunnel vision I had been suffering and began to think of similar places to try. Next stop was another gold mine. I mention this learning experience to demonstrate how we so often find ourselves stuck in the past and fail to think creatively. So, while this pattern will likely not work very often…timing is critical!

Well, here comes spring, and presumably, we won't see any extreme cold weather as the preceding three months, but thinking outside the box and finding fish in areas you don't usually fish doesn't stop with the winter weather. Keep in mind we won't be dealing with lower water temperatures this month, but we will experience higher water levels, which will add a curve to your game plan.

Higher water level increases the playing field. Shorelines that were nearly dry during winter will begin holding concentrations of bait and predators lurking in pursuit as the tides increase with the season. East side sand flats and back bays on the west side will come into play. Keying on ospreys, pelicans and gulls will be sure ways to find the bait.

On the not-so-bright side, March is a very windy month. Continuous strong wind turns normally fishable water the color of chocolate milk. Thick bottom grass helps hold sediments in place but too often we have to fish where can, not where the better fish are holding. Adjust your game plan accordingly.

Currently, redfish catches are average, but with the influx of water and windy conditions you can expect some tough days in March. If we get lucky and the new shrimp hatch shows up this month, you could see seagulls working over tailing redfish in the back bays on the west side, even in the windiest of conditions. Topwaters will come back into play. If the surface action gets slow I recommend a KWigglers Willow Tail or Ball Tail Shad. Weedless gold spoons can also be very effective.

The winter of 2016-17 was generally slow for trophy trout; the bigger ones really did not begin to show until late-March. This year has given us more consistent catches and I have a strong feeling that March will be even better. The bigger fish will still be winter-fat and will become even heavier as they begin to develop roe.

Knowing the tide schedules is another key to success as larger trout will lie in potholes, near points, and along ridges in the bay floor, waiting for bait to be swept within easy reach. I formulate fishing plans to position my charters along these primary structural features during periods when currents reach maximum strength.

As with the reds, topwater action will increase with the water temps and the KWigglers will be my go-to plastics when that action fades. Remember that this is the beginning of spawning season. Please practice careful catch and release, especially with the larger specimens.

I invite everybody to visit the Houston Fishing Show in the George. R. Brown Convention Center, Feb. 28 thru Mar. 4. I will be working the Fishing Tackle Unlimited booth March 1 thru 3. Capt. Wayne Davis and I will host a seminar at 4:30 on Saturday Mar 3 to announce the winners of our Empty Stringers Catch and Release Program.