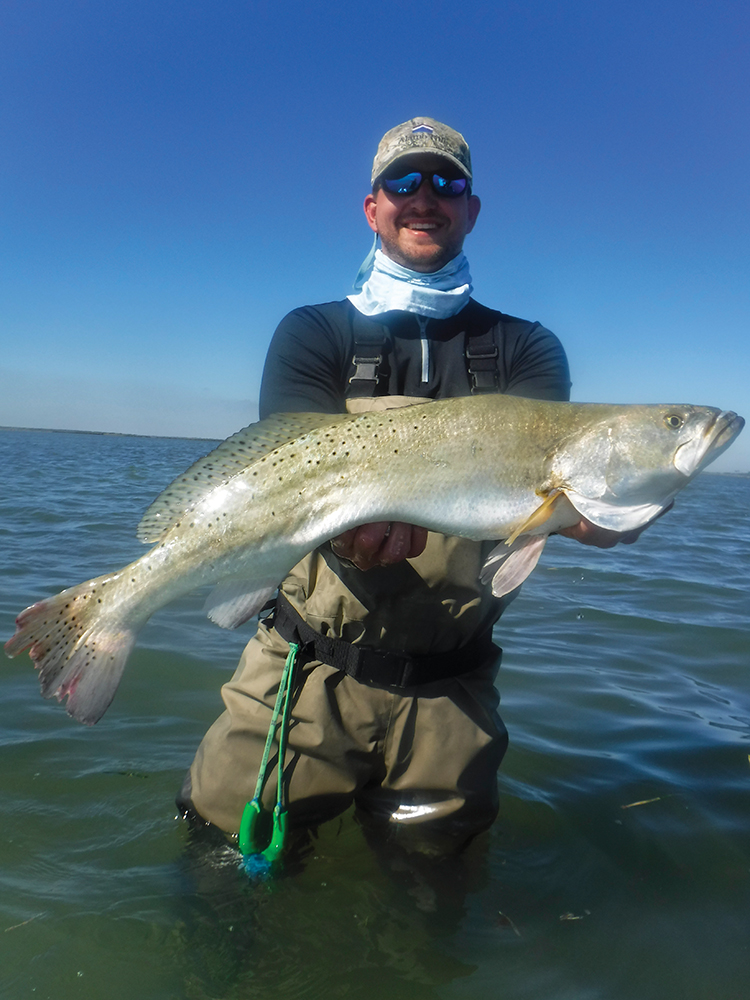 Over about a three-month run we were finding impressive numbers of bigger trout and limits of nice keepers were available most days. Redfish were also fairly plentiful for us. Then long about the middle of January something started to change. The big trout numbers began to dwindle and the reds scattered. The assurance of finding an easy limit of keeper-size trout turned into a daily grind.

Now, I will say that most of our truly slow days occurred when tide movement was minimal during daylight hours. But, no matter how you analyze it, the fact remains that we have seen a significant drop in fishing success since the middle of January. Trying to discover where the fish went or why they won’t bite has been very challenging.

We have fished virtually every structure type in varying depths of water. Despite all the head scratching and searching, we have yet to come up with a plan that yields consistent results. The only thing that seems to work with any semblance of reliability has been setting up in a promising area and patiently waiting for it to mature.

What do I mean by mature? Well, that means knowing where the fish are likely to stage during lower than normal tides and/or where they might go as an incoming tide pushes water onto a flat or through a gut. Keep in mind that bait moves with the currents and game fish usually follow. In other words, you may want to approach and fish an area according to the tide and wind predictions, and that requires some study before you go. Once you’re out there it won’t take long for the actual conditions to prove or contradict your suspicions. It also means being (or waiting) in that place during a solunar feeding period.

I’m seeing more fishing pressure this winter than I can ever remember; which might explain why the fish are scattered. I mentioned switching tactics. Just lately I have opted to fish later in the afternoon when boat traffic is lightest. This seems to have helped but our results are still subpar compared with earlier this winter and winters past.

I have also noticed that significant concentrations of bait have been harder to locate. We find small areas with bait present but not the sheer numbers we are accustomed to seeing. I’m hoping that this will change as the water warms and tides rise in March.

I have mentioned numerous times in this column that I believe our redfish population is lower than normal. Hopefully March’s warmer weather and bigger tides will bring a change for the better. Traditionally during springtime, the eastside flats teem with reds when early morning incoming tides sweep across this region. When the tide is low or receding, look for them to stage along the sand and grass transition, just off the flats.

All winter long, mullet are the predominant forage for redfish, but this changes as the waters warm in March. Shrimp, small crabs, and pinfish become more abundant in shallow water. Rising tides push more water against back bay shorelines where reds love to roam in search of these treats. Pay attention to the gulls and terns. They will help you pinpoint the areas of greatest forage abundance.

One final thought on redfish. I believe the strong numbers of 16 to 19-inch redfish we are catching is a very positive sign and good news for the future of this fishery.

Switching to trout, over and over the past several weeks as we searched for big trout, the question ran through my mind, “Where could they have gone so suddenly?”

What began with such great promise in late November has become a season of grinding for uncharacteristically few bites. How and why this happened may forever remain a mystery. But, I can recall other winters when trophy trout success was modest through much of winter and then blossomed in spring. So let’s dwell on the positives and look to the future.

Warm spring tides rush in from the Gulf bringing waves of new life. Trout will begin to stage along grassy-bottomed shorelines and edges of sandy potholes. Both of these structure types become magnets for bait seeking to hide from predators, and predators lying in ambush. I find potholes particularly productive.