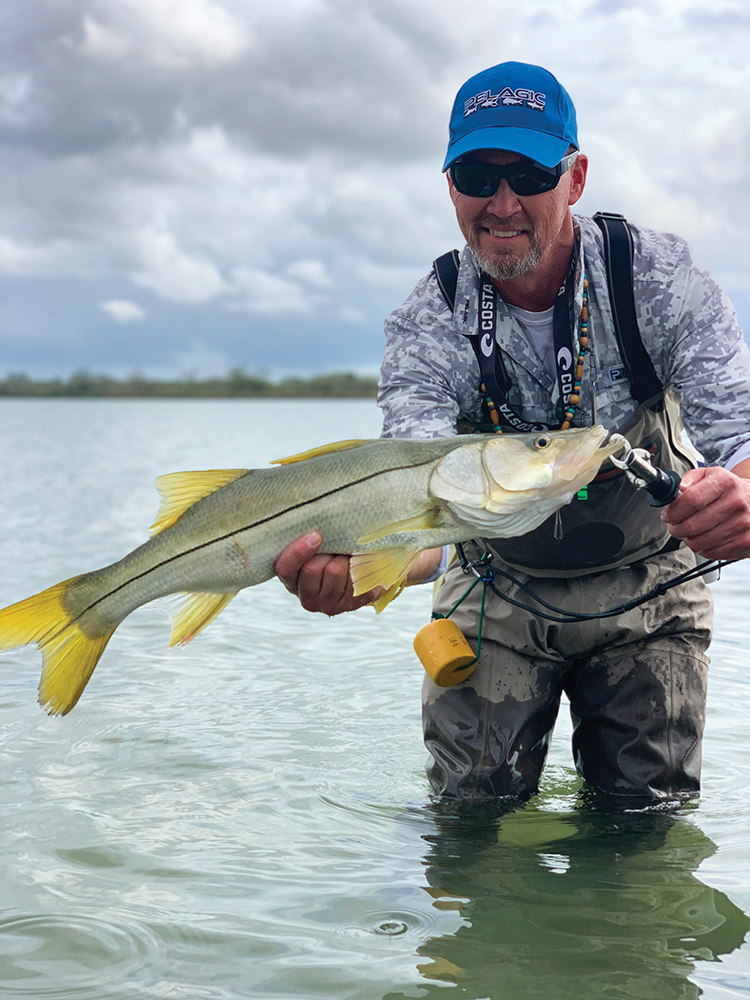 Comparing the speed of a snail with that of a cheetah; the snail is capable of traveling about 0.013 meters per second (m/s) which can also be stated as 0.03 miles per hour. The cheetah has been clocked at 31 m/s or 70 miles per hour. The snail is barely inching forward while the cheetah disappears in a blur. The reason I mention this is to get you thinking about how fast you move through the water while wade fishing.

How quickly you move through a given area makes all the difference in your ability to observe bait activity and signs of game fish feeding. Moving like a cheetah means you’re probably only hitting a piece of structure with a single cast and likely missing many of them. This becomes especially critical in late winter and early spring as fish are coldblooded creatures and cold water slows their metabolism and willingness to put on a speed burst to snag a finger mullet or your lure. Slowing down and firing multiple casts at each piece of structure increases the chances of actually getting it in their face.

Now there can be exceptions to this rule, such as peak feeding periods or water being warmer than normal. Still, for the most part, moving forward at a slower pace and making slower presentations will frequently lead to catching more fish during the timeframe mentioned.

How do I handle a particular area during times of cooler water temps? First – I'm looking for bait, either swirls or actual surface activity. Next – I want to determine how much bait is present. More bait usually translates to more game fish in the area. Finally – the amount of bait and the way it’s behaving dictates the speed of my wade whether I’m targeting trout or redfish.

I typically begin at a slow to moderate walking pace and the first bite is a signal to stop or slow down until I can better assess what is in front of me. A second bite tells me to stop and begin fanning a dozen or more casts across a tighter zone. If I receive no more bites, I fan my casts over a wider area. Still no bites, I resume my original pace until I reach another pocket of fish and then repeat the process. Quite often I zig-zag about fifteen yards left and then right to explore the area more completely.

Each wade can be a learning experience and the more attentive you are to details such as fish and bait patterns, water conditions, depth and structure changes, and the very nature of the bites you are receiving, the more you will learn and then be able to apply to future fishing efforts. You should also be aware of the day’s solunar major and minor feed periods. This collection of information prepares you to make smart decisions in lure selection and whether that lure should be hugging the bottom or worked higher in the water column.

Redfish began showing in good numbers in December and we have been enjoying steady catches ever since. Trout fishing has also been very consistent and the tactics I have described here can also be applied when you’re targeting them. My best advice is to target potholes on grass bottoms for both species. Our best baits for trout and reds have been KWigglers Ball Tails and Willow Tails on light jigheads.

I love springtime fishing because each day is different and the fish tend to be heavier on average. I suggest you take time to do some research, take notes, and explore new areas this spring. I know that heavier trout are due any day; in the meantime we will grind it out and wait patiently for the trophies to show up.

In other news, I look forward to March and catching up with old friends and making new ones at the Houston Fishing Show. The show will be held in the George R. Brown, March 4th through 8th. I will be working in the Fishing Tackle Unlimited booth all five days. Also, on Tuesday March 3rd, I have accepted an invitation to speak at the Alvin Pearland CCA meeting. This event will begin at 7:00 pm at Spring Creek BBQ in Pearland. I will do my best to share valuable fishing information I have learned through hundreds of days on the water.

In the meantime, figure out if you're going to be a snail or a cheetah on your next wade. Hope to see you soon at the Fishing Show.