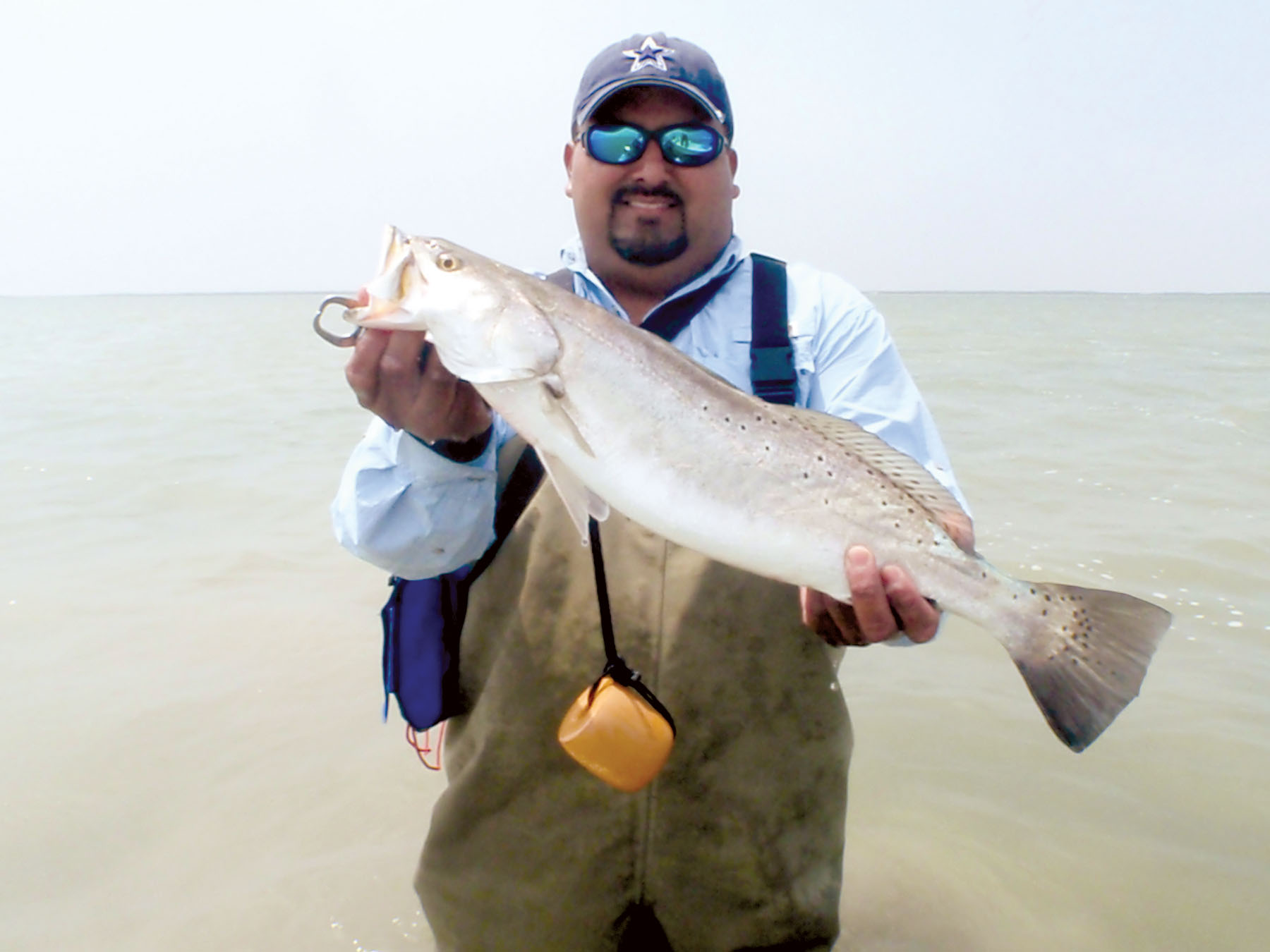 Jorge Cruz caught and released this nice spring trout.
Last month I mentioned how little boat traffic we've been seeing. What a difference a few weeks spring weather makes! The past few weeks at South Padre Island and Arroyo City boat ramps have been pretty busy with what looks to be a prelude to a busy summer season. With the exception of a couple of cool blasts in late spring, everything looks to be on target. Higher tides have arrived allowing the playing field to expand a bit giving the fish more places to feed and hide. Last month I wrote that shorelines would be good places to start your day; that pattern continues to apply for May. The good news is that the strong south-southeast wind will diminish during late-May and I'm sure anglers will welcome the change. When it comes, look for shallow back bays to produce plenty of tailing redfish action.

April fishing has been consistently good when the wind has not been blowing over thirty miles-per-hour. Action for "keeper" trout has been consistent in 2.5-3.5 foot depths while the bigger ones have been holding best in knee deep areas. Our success has doubled in areas riddled with potholes. As for redfish, the bigger concentrations have been found in two to three foot depths and the bite has been a timing thing. Some schools have been very hesitant no matter what we threw and a good plan is to leave them until they are ready to feed. We have enjoyed our best catches when the tide is moving.

On a recent late afternoon trip we were lucky to find a pretty good concentration of redfish but, the problem was, they wouldn't eat. Needless to say we spent a good amount of time walking amid redfish mud boils. We knew they were there but managed only one taker. Being that I had the same group the next morning I told them not to worry, tomorrow would bring another chance.

We got an early start and pulled into the same spot. The tide had fallen about a foot and a half which made me think our reds might have pulled off toward deeper water. As I anchored the boat and got things situated, I instructed my fishermen to head out a little deeper and start reading the water. Specifically, I told them to look for any signs of a bait concentration. I said, "If you find the bait, you'll find the reds."

It took the sun to rise for the baitfish to rise up and show themselves. Being good listeners, my crew positioned themselves right on the edge of the bait schools. It didn't take long for them to experience an excellent trout and redfish bite on topwaters. The father and his two young sons were having a grand time with double hook-ups coming quite often. The kids even managed to catch and release two trout over six pounds. This is some of the stuff that is sure to take place commonly as the water temperatures continue to climb. Don't rule out a fishy looking place if at first it doesn't produce, it might be well worth coming back a few hours later.

If the boat traffic in the last few weeks is any indication of what is to come, you better get an early start and keep boat traffic in mind. Fishing pressure and boat traffic will change the way fish stage and feed in any given area. It might be a good thing to checkout areas that normally experience lighter traffic. Who knows; you might come across a new honey hole. Think shallow and topwaters for some great redfish action, and don't pass up the bait-filled potholes. They are prime territory for excellent trout action.

As you gear up for summer; be sure to check that your equipment is in proper working order. You certainly don't want to be dealing with equipment failures while you're on the water. Selecting the right fishing line is important if you like landing the fish you hook. I highly recommend Sufix Elite Monofilament and Sufix Performance Braid. It was a little over a year ago that I was able to land (90-minute battle) a 140-class Costa Rica tarpon on 12lb Sufix Elite. I was already a believer in Suffix, but that tarpon reinforced it. I spool my larger capacity reels with 12lb Elite and my smaller reels get 10lb test.

Be safe and courteous to others on the water, it looks as though we're in for a busy summer season.