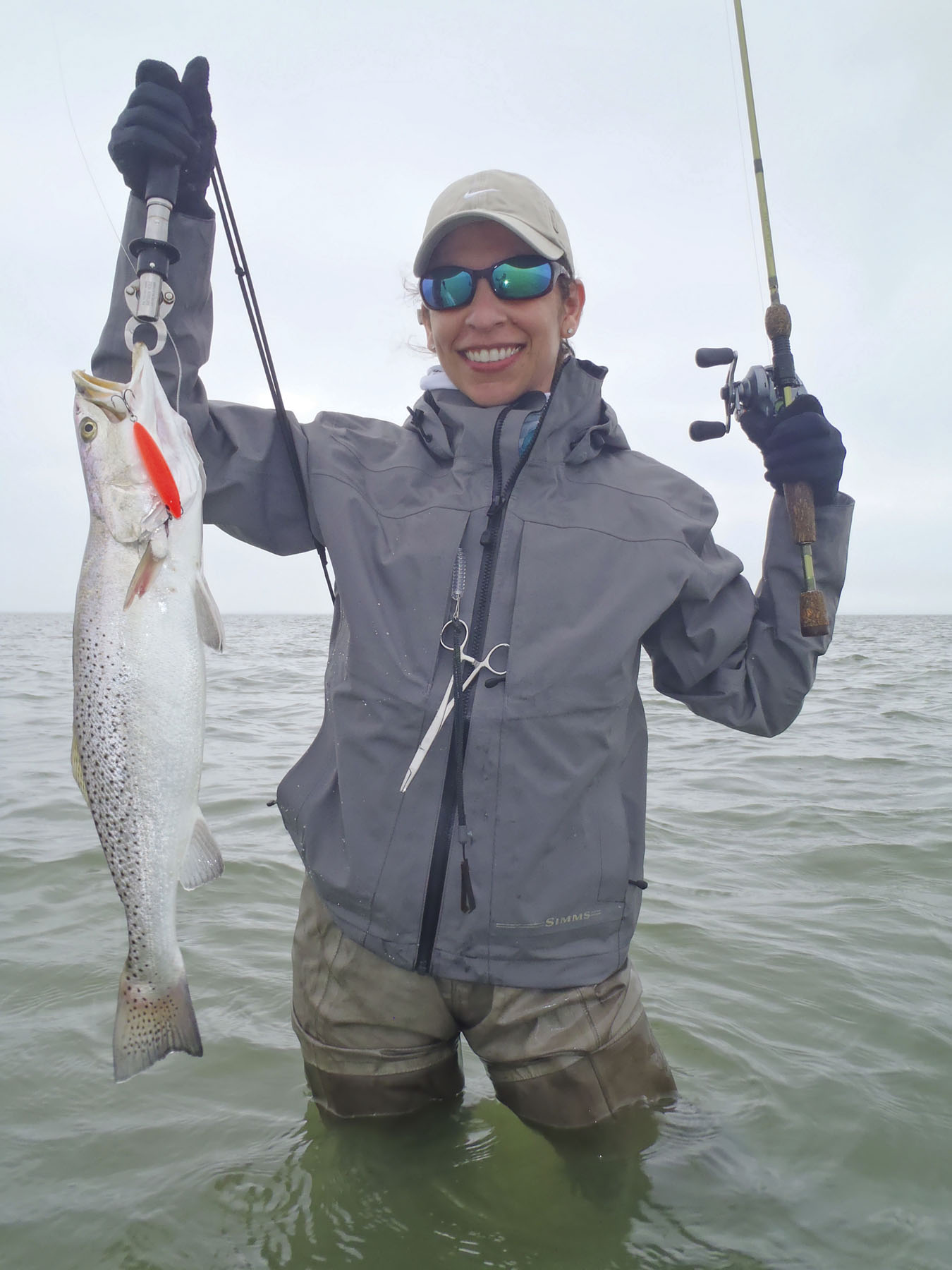 Yvette Brysch, all decked out in her Simms gear, was very happy to land this trout.
We normally see summer weather and fish patterns emerging long about May 15 down here on the Lower Laguna Madre. The way Mother Nature keeps surprising us it is anybody's guess when it will happen this year. I feel that I also need to say that our catching is running below par compared to previous spring seasons. Water clarity has been a major concern over the past five months with the presence of brown tide both east and west of the ICW and it definitely influenced our daily fishing plans. The good news is, as of this report, our water has returned to its famous clear to trout-green clarity instead of brown tide coffeethanks to the strong southerly wind pumping clear water into the Laguna from the Gulf.

Like I mentioned above our catching is not quite what we expect at this time of year. By early to mid-April our backwater areas should be full of redfish. Right now, redfish have been harder than trout to pattern consistently and getting them to commit when we find them has been even more of a challenge. The few reds we are catching have been in sandy potholes with moving tide, averaging 1 to 2 feet of water. Incoming afternoon tide has been the best scenario for locating and also getting them to bite. Slow to medium speed topwaters over the potholes have been generating the majority of our strikes, and when they won't take a floater the K-Wiggler Ball Tail Shad will sometimes get bit. Thus far floating grass has not been much of problem in any of the areas we have been fishing, but it's still early. It has definitely been different, hopefully with water temperatures continuing to rise and consistently higher tide levels on the way we will see more reds where we expect them to be.

Trout catches have been increasing ever since the warm-up began in late-March. Our best catches once again have come on a moving tide, mostly along spoils and drop-offs. Trout are becoming more predictable along ICW spoil points and I would certainly not pass up a shoreline lined with potholes this time of the year, especially when bait is present or you can see slicks popping. We are starting to see bigger trout showing in smallish number, but I really think the peak of this is yet to be seen. Topwaters are slowly becoming more effective and later in May should be even better. The Spook Jr and Skitter Walks in red-white, bone, pink, and anything with chartreuse are good baits to keep handy. This time of the year big trout are known to roam the sandy eastside flats early in the morning and again late in the evening.

I didn't get a chance to personally thank all who came by to say hello during the Houston Fishing Show so I want to say a big thank you to all right now. It was pretty neat to see everyone again. Big thanks as well to Castaway Rods and Fish-N-Hunt Products for sponsoring me and allowing me to assist customers in getting the right product in their hands.

If you're in the market and looking for a good rod that will do everything from soft plastics, small to medium topwaters and Corkys, I would like to suggest that you take a look at the Castaway Skeleton Wader-Light in the 6'5", or if you like a stiffer action, the Skeleton Wader Medium Light would be another excellent choice. For anybody who calls soft plastics their go-to baits to throw, more than Topwaters and Corkys, then I would suggest you take a look at their ultra-light, sensitive but strong Invicta Series.

In closing, I would like to say whatever species you plan to pursue, make it fun. Be patient and courteous to other fishermen. Tournament season gets underway this month and the water will become rather crowded on weekends and some of those folks may not know their way around our bays all that well. Remember to enjoy the chase, without it there would be no catching!