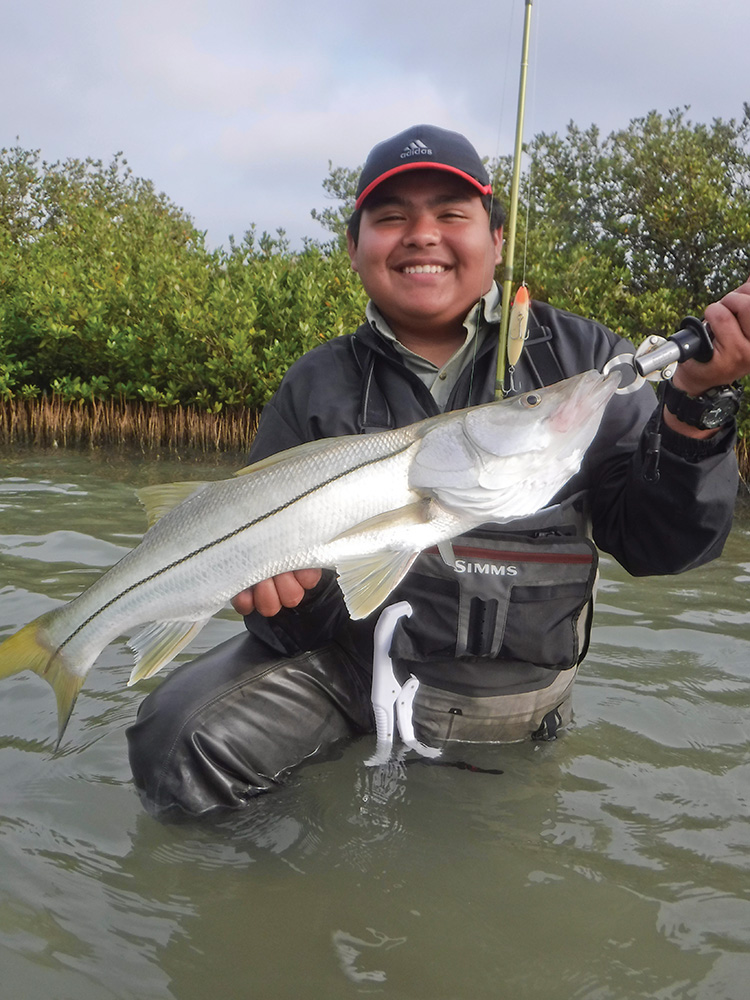 Happy to have been part of Freddy Cisneros landing his personal-best snook.

We have just passed what I believe to have been the most brutal month of the year. By brutal I mean the windiest thus far. During springtime, winds reaching 25- to 35-mph daily are to be expected, and our game plans are formulated accordingly. Instead of fishing favorite spots, we are forced into areas that have favorable fishing conditions. I wish I could say that our recent fishing has been superb; instead, it has been quite unpredictable due to the daily strong winds and high tides. Then, throw in a full moon period and you have yourself a very challenging day on the water.

I remember several years back the wind howled straight into July. I hope this is not the case this year. I can put up with rain, thunderstorms, and cold weather but windy conditions I cannot stand. It can get frustrating when all you see is chocolate water across the entire bay. Part of fishing is being able to communicate and carry a conversation. Well, when the wind is blowing 25-35 mph; it's hard to hear each other when you're 10 feet away, much less when you're wading 25 yards apart.

We’re still not out of the woods as far as windy conditions. If it's an average year, the winds should begin to subside by the third week of May, while the water on the skinny flats is still cool enough to find fish all day long – one of the reasons I consider May to be one of the best months for redfish. Last May our big trout catches also increased dramatically.

Redfish have been playing Houdini the last few weeks; just when you think you have them figured out they disappear. Part of the difficulty has been higher than normal tides. We have been relying on prior knowledge of where they are likely to be this time of year and the presence of bait.

When chasing redfish, keep in mind that the bay holds lots of shrimp in springtime. Redfish love shrimp and shrimp prefer muddy bottoms. The back-bay areas on the west side have plenty of that. Windier late-afternoon and early-evening hours can provide excellent bird action over redfish as the shrimp become active in the wind-stirred, murky water. (They’re usually most active in darkness.)

With already elevated tides likely to rise even higher, look for the east side sand flats to hold more reds than they have all year. Suggested baits are weedless gold spoons, K-Wiggler’s Ball Tails and Willow Tails in Turtle Grass and Mansfield Margarita, and my all-time favorite; Plum-Chartreuse. Small topwaters always deserve a try when shrimp are seen skipping on the surface.

Our big trout catch ratio has dipped a bit since February and March, but don't give up on them just yet. Last year in May we caught trout in the trophy class and continued catching them well into June. The high caliber trout will most likely not be concentrated with other trophies as they were in the colder months, but if they haven't dropped their eggs, expect them to be heavy.

A topwater worked across shallow grassy flats early in the morning, or right up against a spoil island, will undoubtedly attract something of size if it’s there. Look for potholes in the area and bring your surface lure across the edges of sandy areas where fish like to lie in ambush.

As far as keeper-sized trout and little ones, they seem to be in most all the places we fish. If numbers are what you are after, I suggest you fish near the ICW or the deeper pockets of the bay. Plastic baits like the K-Wiggler Bail Tail Shads in Plum/Chart, Flo-Mingo, and Mansfield Margarita are great producers in depths ranging 3- to 6-feet. I like to throw a Willow Tail Shad in the new Turtle Grass color, Mansfield Margarita, and Bone Diamond in depths less than 3-feet.

May should be a great month here on the Lower Laguna, provided the wind will lie down. Look for the two tide days to be your better ones to fish and don’t forget the new moon phase includes the most feeding activity during daylight hours. May also marks the beginning of the tournament season, which means our waters will be quite a bit busier than usual. We all share the same water so be extra courteous to your fellow anglers. When boat traffic is especially busy I look to the evening hours when there is less traffic and less pressure on the fish.

Regardless of wind or no wind, best fishing to you!