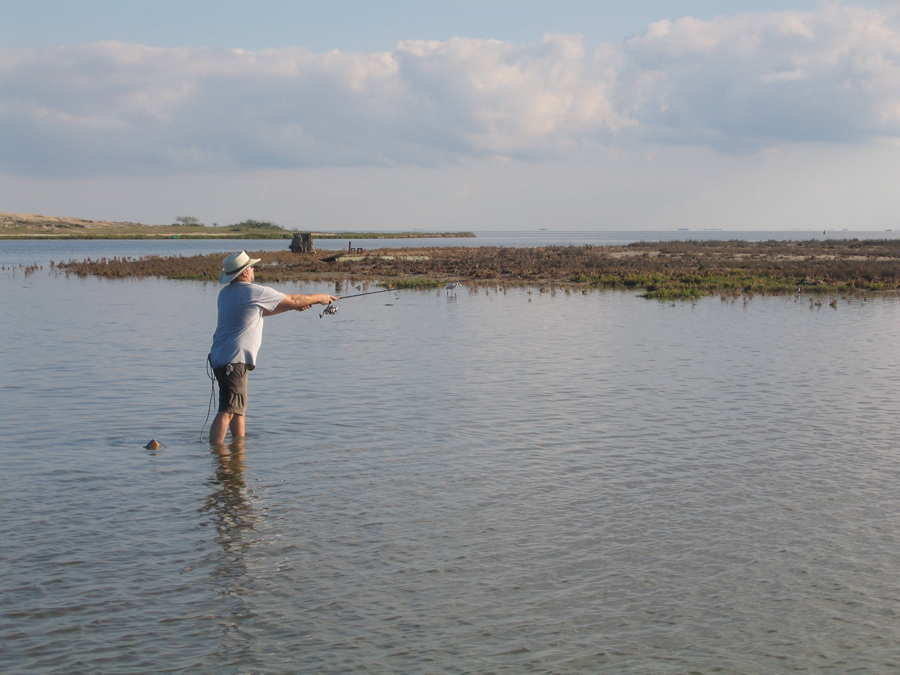 Richard is stalking redfish on the bank.

The month of November marks the beginning of the winter holidays. This is when we begin to prepare for the day of the big feast. As the day draws closer, we will go regularly to the grocery store and fill our shelves with all the trimmings, and of course, how could we ever forget that huge Butterball turkey? This time of year also marks the beginning of gaining a few extra pounds as a consequence of all the opportunities to gorge on well-prepared tables.

The gorging of the feast is not only limited to our homes, a feast also takes place on the Lower Laguna Madre. This is the month where tide levels have been high long enough to fill our back waters with plenty of provisions such as small crabs, tiny shrimp, mud minnows, and other small fin fish. You could say the sand and mud shelves on the Lower Laguna will be stocked with plenty of resources for hungry trout willing to add a few inches of girth. In November it is common to find fish that haven't even digested their last prey to be willing and aggressive as they pounce on a well presented lure.

These fish know by nature that winter will soon be arriving. With the arrival of winter, cooler water temperatures will prevail as the passing of cold fronts become more frequent. This means fish will not hold the same feeding pattern in December or in January as they would in November. The fish will begin to gorge on the "cupboards" of our bays and develop some big shoulders and pot bellies as they enjoy feasting on all the food that is available during the month of November.

During early fall in the months of September and October, we found plenty of fish around, but getting them to commit was a dilemma we had to deal with. During these months the water levels came up which caused our fish populations to have more places to hide. We were able to find fish working shorelines and other places that were previously inaccessible due to lack of water. Once we found the fish, we threw spoons in different sizes, topwaters in a multiple of colors, and plastics baits. For the most part we had many refusals and only a few takers. On many trips I had to leave these lockjawed fish and try else where to find a bite only to return back a few hours later knowing there were plenty of fish there. On the second visit to these spots, we found that the fish had a more predator-like attitude and had developed an appetite for our baits. On many occasions this was the secret of our success. We also found good success in fishing shallow bays when waiting for the sun to rise high above the horizon and allowing us to sight-cast to cruising redfish.

On a recent trip, I had two anglers with many years of fishing experience, mainly on the upper coast, but they never had yet to experience the enjoyment of sight-casting to redfish in gin clear water. We set our drift in less than a foot of water with the bow of the boat pointing downwind and of course not forgetting to leave the engine in gear so that the prop would not spin and alert the fish to our presence. I had the anglers stand on the center console armed and ready for any opportunity that might arise. Since they had no experience in fishing in this manner, I had them throw some practice casts at a few horse mullet that were milling in the area.

On our first and second drifts, they found it difficult to actually see the fish. One of the keys in spotting fish from up high in shallow water is to focus on the bottom. In wade fishing I tend to focus on surface movement looking for any little ripple or nervous water that will usually show the presence of a predator or baitfish. When sight-casting from up high, I instruct my anglers to focus on the bottom and look for the silhouette of a fish. On most occasions you can see the fish you are hoping to catch in the crystal clear water. Another key is to keep your eyes moving, constantly scanning from nine o'clock to three o'clock position and then back, all the while trying to distinguish what's lying on the bottom.

After a few mistaken identities of possible redfish and a fair share of poorly placed casts, my anglers finally caught on and managed to land a couple of bronze colored beauties. On one occasion I spotted a redfish that my clients could not see, I told one of them to make a two o'clock cast about thirty yards away. It was well placed, just in front of the fish. Then you could hear me telling him reel, reel, work it, work it, set the hook, fish on. All this time never did one of the anglers ever see the fish. It was at that moment that I knew they were hooked on sight-casting by their expressions and high fives. It was experiences like this one that made up for some slow morning bites.

November has always been good as my fishing log book confirms. Redfish will be on the prowl, ready and willing to gorge on just about anything that comes their way. They will continue to hold in shallow back bays. Already we have seen a healthy population of small to medium size trout in waist deep waters. The month of November certainly brings cooler air and water temperatures, but as the temperatures decline the fishing gets better. Historically, cooler water temperatures means trout catches will increase in size and numbers. This is also the month where water temperatures cool down enough to start wearing your waders. Last year by the third week of November we were dressing in waders.

So if you still have the energy to get away from the table after eating all those pies and other good stuff, come join us at the feast of another kind on the Lower Laguna Madre.