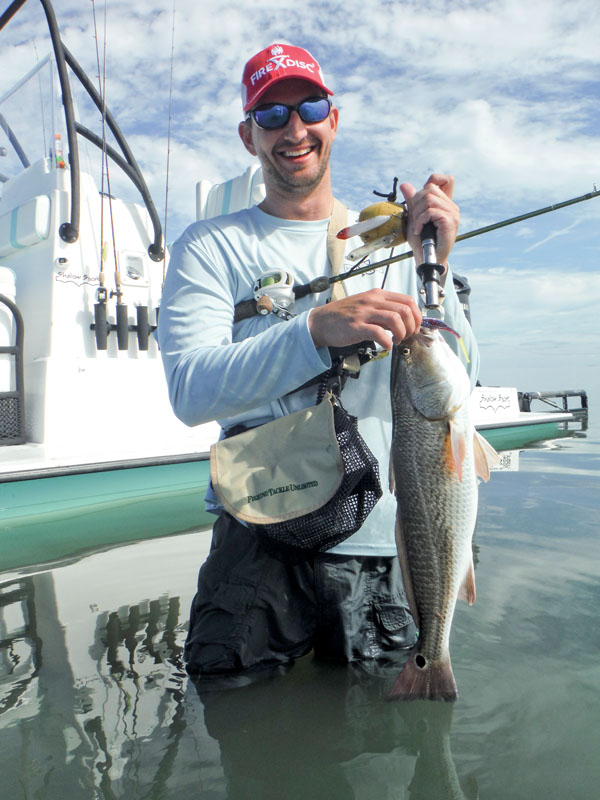 Tommy caught this nice redfish on a K-Wiggler on a calm fall morning.

I have some bad news and some good news. Luckily, the good far outweighs the bad.

Let's start with the bad. Right after my last article we learned that our South Padre gulf-side beach was tainted with red tide which, for the record, is a bit earlier than in previous years. Water temps at the time were running 84- to 91-degrees. This worried me as red tide blooms very rapidly at higher temperatures and cooler weather was still weeks away.

A moderate fish kill first appeared on the beachfront, then moved into the ship channel and across to South Bay and canals near Port Isabel. It spread to the SPI Causeway and eventually to Laguna Vista. Dead fish could be seen but most were bait species with only a few flounder, redfish, snook, trout and ladyfish. Nobody likes to see a fish kill but at least the game species dodged the bullet, so far. The arrival of the first cold front pushed the water temps down into the 70s and this seems to have stalled the spread of the killer algae.

So the good news is that the event is nowhere near as widespread as last year. Hopefully with the continuation of cooler weather it will soon disappear.

I wrote last month that Capt. Wayne Davis and I would be traveling to Jensen Beach, Florida for a gathering of guides from all over the country. Called the Slack Tide Gathering, it is sponsored by Costa, Simms, Yeti, and other companies. The gathering was very informative and what impressed me most was the commitment to preservation and conservation of our fisheries and natural resources. Marketing is not their only focus, they are truly on a mission to preserve and conserve. All the locals and guides in attendance were very eager to invite us aboard their boats and show us around their waters. I'm already looking forward to next year's event.

More good news. Fishing has really picked up and water conditions are great. I have noticed that many areas void of grass since the 2010 floods are now flourishing and this contributes greatly to water clarity. Redfish are finally schooling in good numbers and can be found in traditional places. The sand on the east side has turned on with schools of redfish roaming the flats. Lower water temperatures and cloudy days have helped keep the fish on the sand longer. Water levels remain high, which is ideal for targeting reds on the flats of the west side lakes. Early morning shoreline wades have been giving us lots of redfish on topwaters, knee-deep. Plastics and spoons are the way to go in the real skinny stuff. Stealth is the keyword when their backs are showing.

I still get questions on whether the five-trout limit implemented in 2007 has benefited us. My response to that is, "Absolutely!" It seems that throughout the year we are catching more trout in more places. And, here's the kicker, we have caught and released more big trout than prior to 2007. I would say our Lower Laguna trout fishery is in great shape and we need to continue fishing conservatively to keep it that way!

Trout fishing continues to be outstanding. Lots of small fish but no problem catching a limit of keepers, some pretty nice ones, too. Everything is in play right now; flats, potholes, edges of the ICW and spoil islands. We have been finding the steadiest action in thigh- to belly-deep water most days. Keeping the lures low near bottom seems the best retrieve. In past years, it's right after Thanksgiving that we will begin to see and catch bigger trout on the flats. They will take just about any lure but the surface bite always seems to explode right about that time.

I'm excited about my association with K-Wiggler and their unveiling of a new bait I have been waiting for. I have field-tested several prototypes and I think they have finally found the right action and length. I have caught good fish right here in my home waters and also off the coast of Florida with it. Keep your eyes open because this bait is sure to become a must-have in your wade box.

Come the third week of November we will be in waders, if not sooner. If you want the best waders, bar none, Simms Gore-Tex are the only way to go. Forget about cheap and leaky; Simms stands behind their products. Fishing Tackle Unlimited with three stores in Houston is the largest retailer of Simms products in the world. Whatever Simms product you need, you can bet they have it. If you have never been to any of the three locations, it's worth stopping. You will not be disappointed!