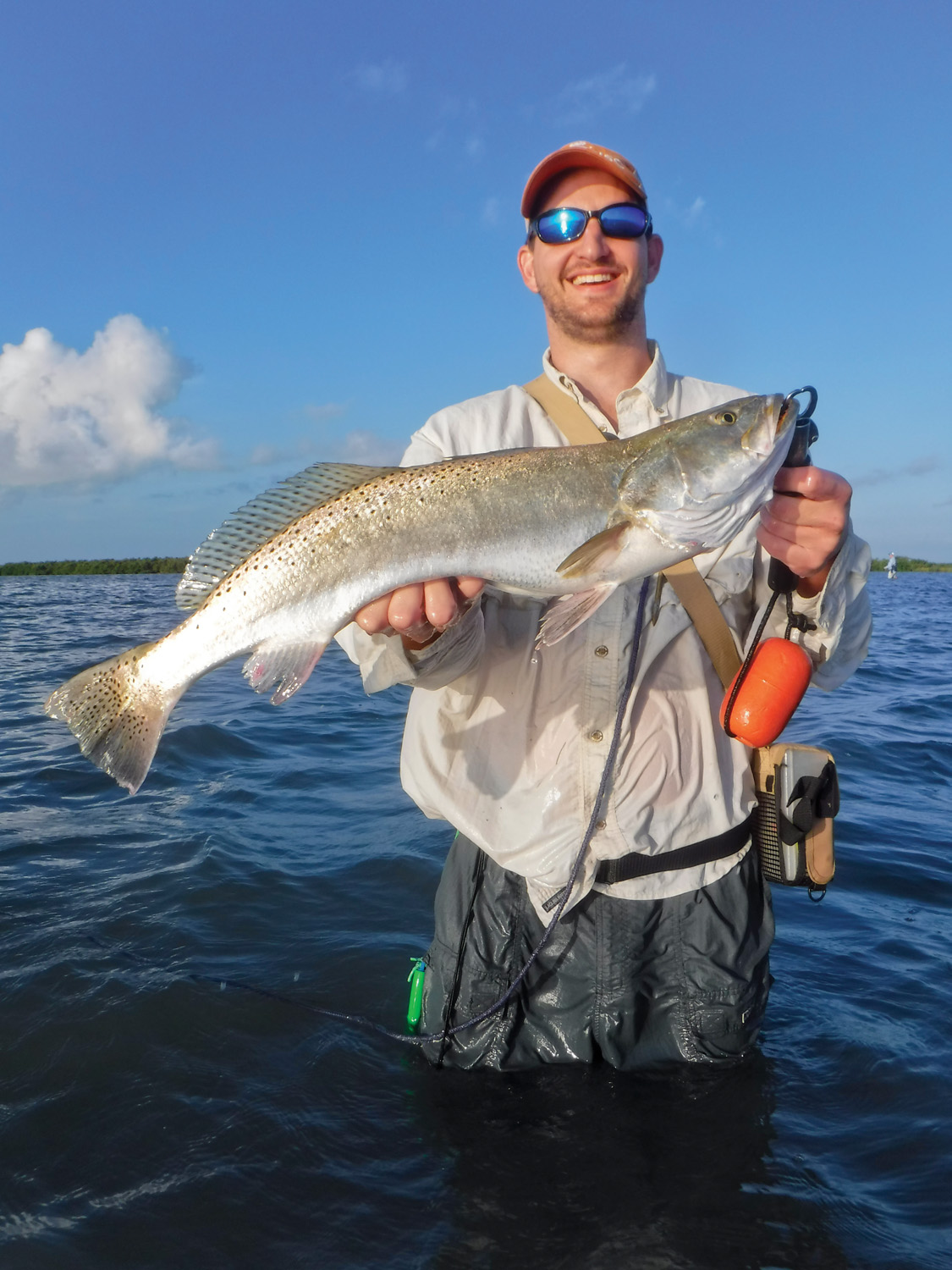 The month I’ve been waiting for has finally arrived. November’s cooler temperatures are a catalyst that sparks consistently increased feeding activity as well as a prelude to trophy trout season. It’s almost as though the fish can sense winter’s approach and gorge daily to put on weight in preparation for the long stretch of colder days that lie ahead.

Along with more frequent feeding activity we will also see greater willingness for trout and redfish to feed on the surface. During the long hot weeks of late-summer and early-fall, we often saw fish rushing a topwater and then shying away at the last second, or maybe only bumping it. All that changes come November as crushing strikes take the place of finicky swirls and halfhearted blowups.

Another reason I like this time of the year is the comfort that my Simms waders, jacket and various underlayers provide. Staying focused through a long day on the water is hard to accomplish when you are wet and cold. Dressing in layers, it is very easy to begin the day bundled warm and tight and then shed as necessary as the day warms. Hands down, Simms offers the best gear money can buy!

Redfish, in general, are showing in good numbers, but mostly in isolated pockets. I have fished from the Land Cut all the way to Port Isabel recently and have not been able to establish a pattern that holds for more than a few days. The tides being higher than normal recently likely contributes to this. Rather than attempting to stay on schools, we have enjoyed better results working inundated back bay shorelines and drains, searching for mullet concentrations more than waking and tailing reds. The lone exception has been the eastside sand flats near Port Mansfield’s East Cut.

November usually kicks off the big trout season in the Lower Laguna. Already we are beginning to see increased trout feeding activity and better fish coming to hand than during September and the first weeks of October. As the water temperature continues to drop, we will continue to see more consistent patterns developing and individual weights increasing. Each passing cold front seems to make the fishing better. Luckily, November’s patterns do not usually require slogging through calf-deep muck, which becomes a daily routine later in winter.

Our trout population, as I have mentioned before, is in good shape as we are catching them in good numbers in multiple areas, from the Land cut to Port Isabel. Finding keepers has not been at all difficult. Even slower days can be remedied by wading near the ICW drop-off.

The new K-Wigglers Willow Tail in Mansfield Margarita has been a steady producer when worked low in the water column and our go-to for catching numbers. The fluttering tail evidently adds extra fish-attracting vibration, calling fish from farther away than rattail plastics. Its weedless capability also comes in very handy when fish are holding in grassier areas.

Trout slicks have been very prevalent of late. Paying attention and working the area thoroughly when they initially pop on the surface is a sure bet for receiving aggressive feeding strikes. Most of the slicks I have witnessed lately have been popping in deeper water, meaning that we often need to make long casts to reach the feeding zone. But, never pass even a single slick. Lately, our bigger trout seem to be loners, and you cannot predict the size of the fish simply by the size or number of slicks popping.

Our high fall tides remained well into winter last year, much longer than any of us expected. This year, who knows? Keep in mind that strong cold fronts will blow the tides out for a few days and, if like last year, they will return to pre-front levels before too long. As this occurs, it will cause fish to migrate but they also seem to return to the structure they were using earlier. Another hint for finding November fish is keying on bird activity – and not just seagulls. Sharp-eyed brown pelicans, ospreys, and even cormorants have ability to see bait in the water that we can only see when they are active at the surface. I cannot tell you how many times I have relied on the birds to lead me to a steady bite.

Now is the time to gear up for the colder fishing weather that is coming. I strongly suggest Fishing Tackle Unlimited for all your Simms outerwear and underlayers. Visit one of their three Houston stores or online at FishingTackleUnlimited.com.