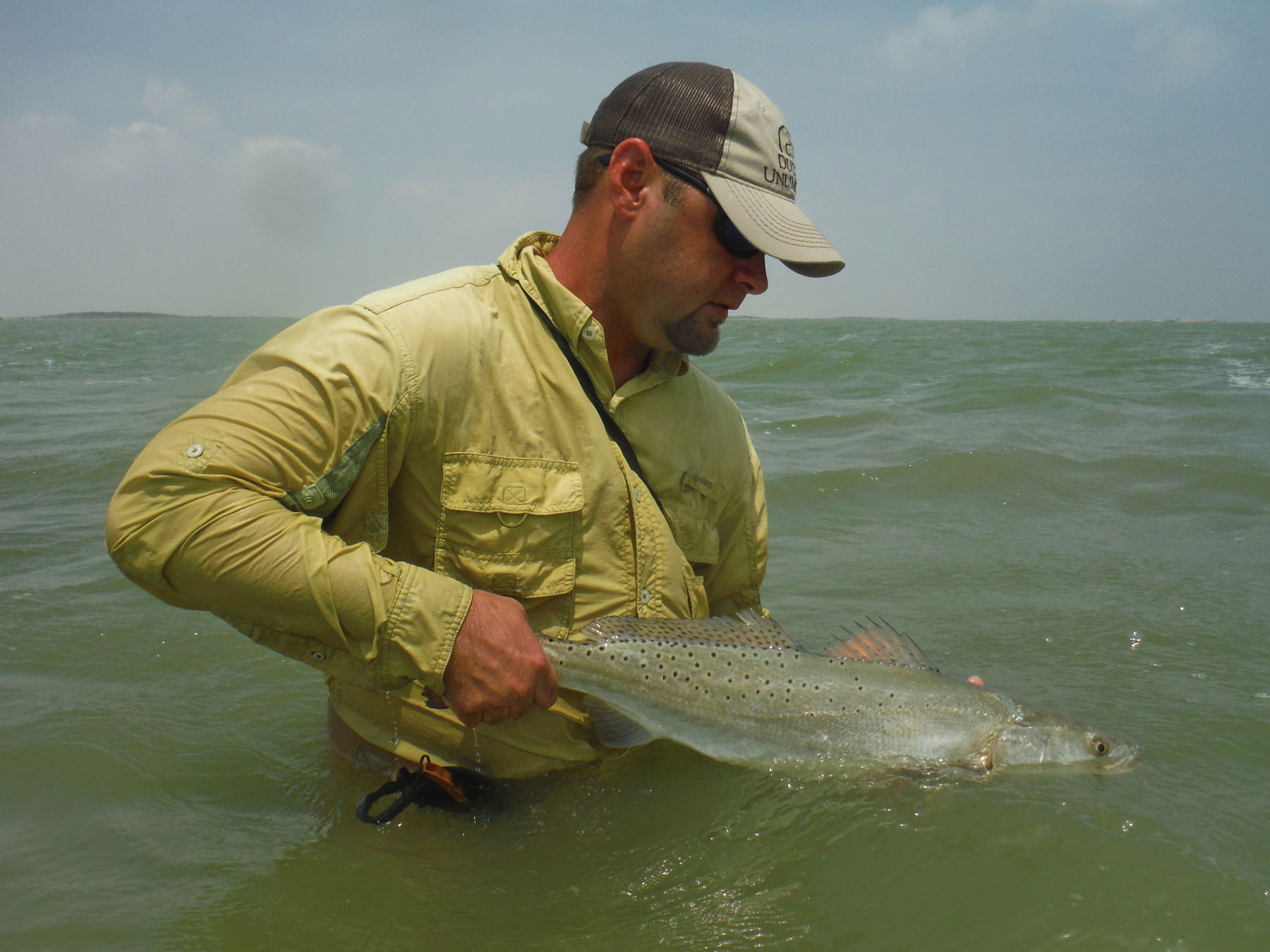 One of two big trout released for this angler.
I am happy to report that I have not been this excited about fishing in quite some time. Honestly, our fishing has been superb the last several weeks and it will only get better as the water temperature declines through the fall season. Many of our back-bays are holding good numbers of redfish while the ICW drop-off and surrounding flats have been great places to catch a limit of trout. As a bonus, bigger trout are beginning to show here and there. Juvenile tarpon are being spotted and caught at the mouth of the Arroyo Colorado and the snook bite has finally turned on. Now if you add excellent water quality all throughout the Lower Laguna, you might begin to understand my excitement.

The last weeks of August gave us a long run of extremely low tides, and because low water levels concentrate fish, finding them and figuring their patterns was fairly easy. It was really just a matter of being there when they were feeding. Then during the first days of September we experienced a huge rise in water level and they scattered. So we're back on the hunt, but the hunting is very good.

October is a month of change as summer fades and winter approaches. Days will be growing noticeably shorter and we will begin seeing a few fronts coming down. The cooler air will cause enough of a change to make fish move from their late summer patterns and into their cool-weather, fall patterns. This time of the year mullet and pinfish become a major food source for game fish and the trout and redfish will follow those schools as they move around the bays.

A good place to start your October days is on the clear, shallow sand-flats on the east shoreline, just as the sun is coming up. The reds will be there hustling tiny blue crabs, shrimp and baitfish; they've already been there for several weeks and we see them rooting and tailing when it is calm. Outgoing tides seem to produce best. When the sun is well up the mullet will head toward deeper grass beds and the reds will follow. The outgoing tide triggers a more definable pattern.

Over on the west side, the rain that we have been receiving has all the small drains running and the adjacent flats are holding lots of reds and some trout. I will be targeting structure such as guts or other depressions near these drains in October as well as all the potholes in the area. By the indication of the number of redfish we have been seeing and catching, it looks like we are headed into a good winter season. Let me not fail to mention that the reds have been very aggressive on the surface, taking small to medium size topwaters very readily most days.

I mentioned in last month's report that the big trout action was just getting started. We were seeing and catching big trout as though it was springtime, not the beginning of fall. Now perhaps you too have noticed that everything seems to be running very late this year. The big trout action we usually experience in February through May just didn't pan out, but as the summer wore on the big trout finally showed up and I am greatly relieved to see them. While we find smaller trout nearly everywhere we fish, this is almost never the case with the big ones. I have no clue where they have been all these months but the sprinkling of heavy trout we have been catching is, in my opinion, a very good sign for the months ahead.

I would like to take a commercial break and send out kudos to a great rod company who became a loyal sponsor of my fishing business earlier this year. Castaway Rods has just introduced the best rod I believe they have ever built. They call it the Nano Blade and I have been using it since July, right after it was announced at the ICAST show. I used it in Florida this past August and have continued using it on my jaunts on the Lower Laguna Madre. I like how it feels and the way it has performed. Look for a full review in my next month's article. Finally, I would like to say that even if your fishing is slow this month, make sure you come out and enjoy some of the prettiest sunsets of the year. October is a great time to be on the water. Best fishing to you!