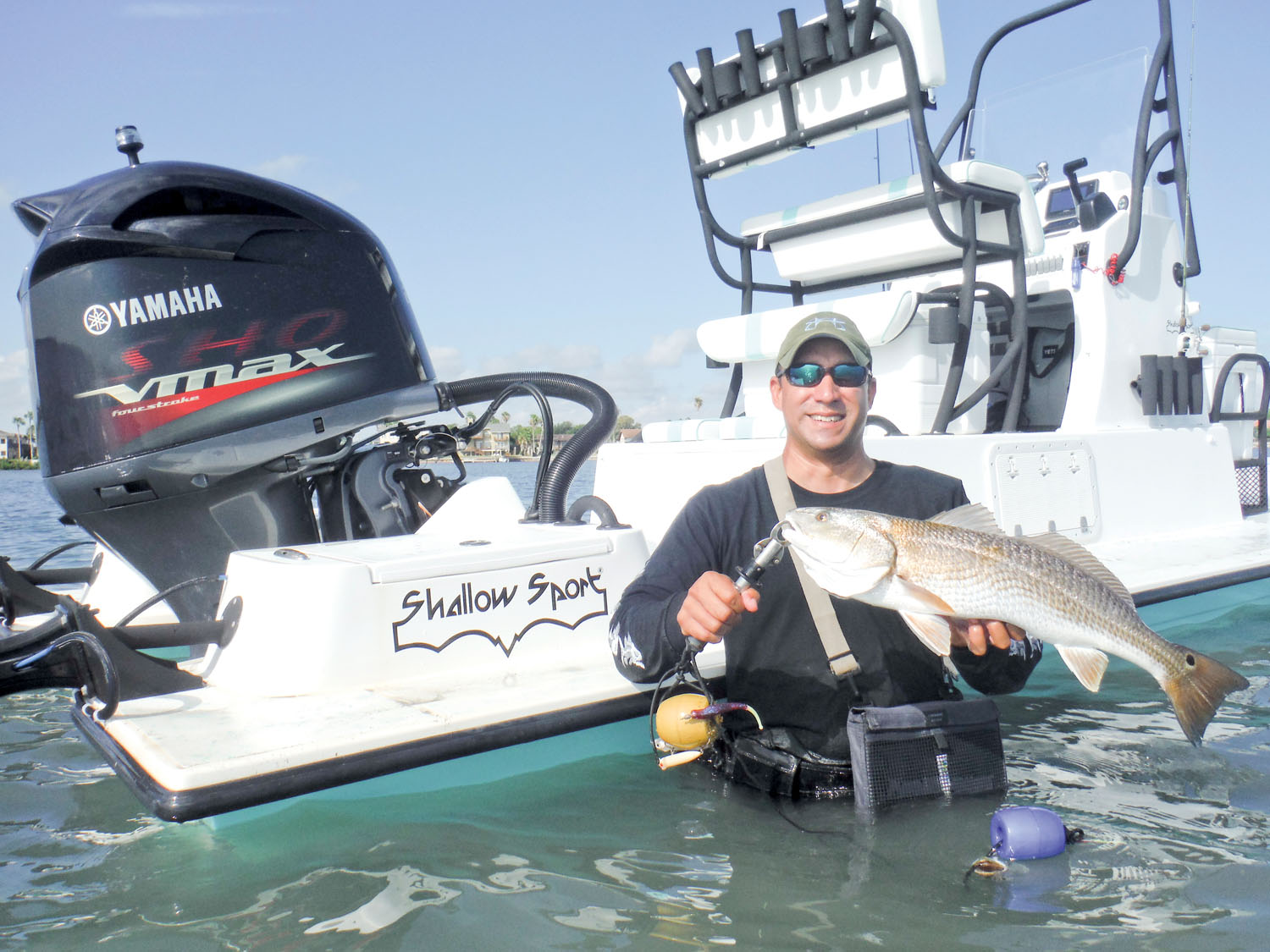 Who's says game wardens can't fish? Santana Torres caught this one on topwater.

I am very excited to be entering a new season. Gone at last are the long strings of scorching 100 days and summertime boat traffic. It was a grind all summer to stay on solid fishing patterns and I really disliked having to fish deeper than I'm accustomed, not only to stay cool but also because boat traffic pushed so many fish from their normal shallow areas so many days.

October is usually a transitional month as cooler weather predominates and our fish change their staging and feeding patterns. I expect to see more aggressive shallow water feeding activity lasting for longer periods than in summer, but with tides running at traditional highs for the season we will probably need to cover more water to find them.

The best news I have to offer is that redfish can now be found in many areas from Port Mansfield all the way to South Padre. We did not enjoy such widespread opportunity as recently as a few weeks ago. Schools of reds have invaded the eastside grass and sand flats in very encouraging numbers. Being that the east side of the Laguna is much clearer than west of the ICW, the redfish are going to be spookier unless they are schooled up. When they run in schools they tend to be extra aggressive in their feeding because of their competitive nature. When they are schooling, it really doesn't matter what you throw at them. They usually race to see who eats it first. Gold spoons, plastics such as a K-Wiggler Balltails in bone diamond and plum-chartreuse, and sometimes a Super Spook Jr will entice ferocious strikes from schooling reds.

Being that our water levels are higher than normal right now and should continue to hold that way through most of this month, our back bay shorelines have been pretty productive. Toward the middle of September redfish started feeding aggressively, but this is no comparison to what we'll see as the fall season develops. I look forward to exciting topwater action along recently flooded shorelines as the schools harass rafts of mullet and stand on their noses with tails exposed rooting shrimp from the grass.

Our Lower Laguna trout fishery is really healthy right now, not only for keepers but we are also seeing some pushing the twenty-five inch mark. The numbers of undersize fish also point toward a bright future. I suggest handling them gingerly when landing and releasing as they are the foundation of our fishery in coming years.

This time of the year you will find trout alongside redfish on shorelines and grass flats when targeting shallow potholes. We typically see them staging and feeding shallower for longer periods this time of year and willing to take small surface lures. Deeper water will also hold good numbers of trout, worth mentioning are the old oil field channels on the flats. Lately we have been concentrating on large schools of active mullet on the edges of deeper water and finding solid topwater action. Look for trout fishing to get even better as we work through October and closer to the kickoff to trophy season that could begin as early as mid-November.

Flounder numbers continue to flourish as can be seen daily on my charters. Their common haunts are always edges of the ICW around piers, cabin pilings, and old oil field cuts, but we continue to find them scattered on the flats when targeting trout and redfish. Snook my favorite of all have also been making a solid showing this year with many clients able to scratch this South Texas trophy species from their bucket list.

In closing I want to thank Fishing Tackle Unlimited for providing me their excellent Green Rods. The action, sensitivity, and lightweight comfort all contribute to our success through long days on the water. Thanks also to Concept 13 reels, an excellent choice for pairing with the Green Rod. Wade fishermen take note; Concept 13 showcased a new model at ICAST back in July that is designed specifically for Texas. Features include corrosion-resistant sealed bearings to meet the demands of extreme salinity. Look for it soon at Fishing Tackle Unlimited. Last but certainly not least, a big thank you to Costa Del Mar for providing me the best optics on the water. I'm excited to say that I will be attending their Slack Tide Gathering later this fall in Jensen Beach, Florida. They will be hosting seminars, games and, of course, we'll get to wet a line. I cannot wait to provide a report next month how that adventure went.

Best fishing to you!