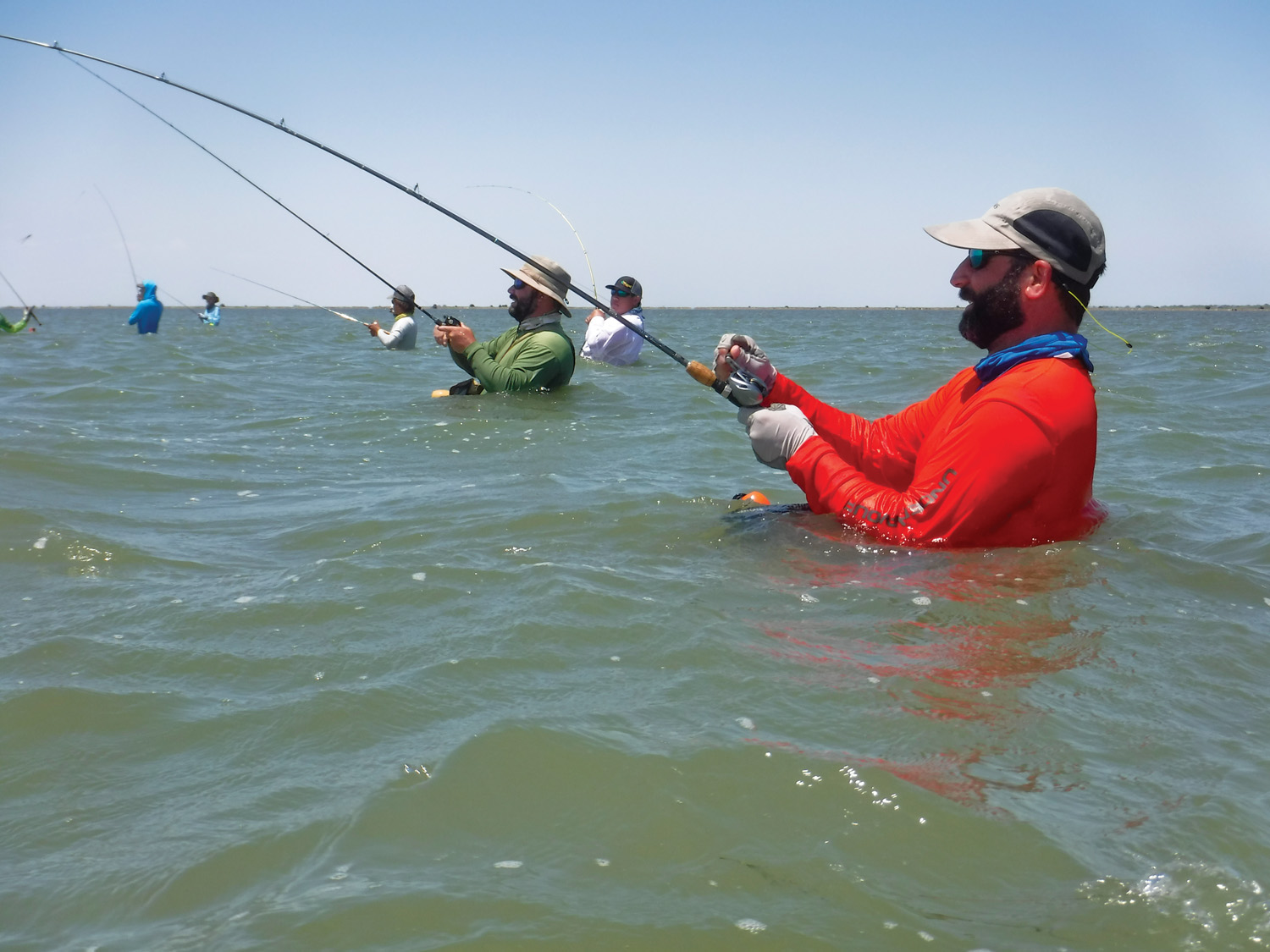 Adam and his group were fortunate to get on a big school of redfish. Multiple hookups were the norm for this group.

Weather, water temps and tides are beginning to settle into normal fall ranges. In general terms, October on the Lower Laguna means quite a few partly to mostly-cloudy days, frequent rain and predominantly light wind. Sounds just about perfect after a long, hot and windy summer. Many mornings of late we have been greeted by slick-calm bay waters – perfect for spotting waking redfish on shallow flats.

I know this will sound strange to middle and upper coast anglers who just came through Harvey but, as I write this we are actually running behind on fall precipitation. This has given us greater than normal salinity and, coupled with rather low tide levels, might explain why we are still finding the largest concentrations of fish hanging in deeper water.

I expect to see significant declines in water temperature very soon as the days grow shorter and cool fronts arrive more frequently. Boat traffic will be much lighter than we saw during summer and fish will feed more regularly and for longer periods. Anglers who forsake dove fields and deer blinds should enjoy some of the year’s best fishing conditions.

Redfish continue to puzzle me. Our landings the last two years are definitely below average, especially if you look back four or five years. To add to the mystery, right of the blue, we will have a day when they absolutely wear us out. Currently, the most consistent area for numbers of redfish has been up around Port Mansfield, then Arroyo City, with SPI/Port Isabel straggling way behind. Luckily, the calmer mornings have been allowing us to spot scattered “wakers” on the eastside SPI flats although tricking them to bite can be a challenge in clear calf-deep water.

Redfish topwater action has been very spotty. When we are fortunate to locate a school of reds in thigh to belly-deep depths we do well with darker baits like the K-Wigglers in plum-chartreuse and Mansfield margarita.

The Lower Laguna speckled trout fishery continues to thrive as is evidenced by solid action that can be found from the waters of Port Isabel all the way up to the Land Cut.

Another very promising sign is the steady number of small trout we encounter nearly everywhere we stop. Though sometimes numerous enough to be considered pests, we take as much care in removing hooks and releasing these little guys as we do when handling trophies.

In addition to the abundance of small trout, it continues to be relatively easy to string a limit. We are still seeing a few big trout out there, middle- to upper-20s, but for the most part the keepers are running 16- to 20-inches.

The skinny grass flats are holding some numbers of trout, but the trick is to target them early before they head to deeper water. The most productive water throughout the day has been waist-deep and marked with potholes. Other productive places are along the ICW drop-off, guts on the flats, and grass lines. Find active mullet and piggy perch in the areas described and find trout. We’ve had quite a few nice trout recently burping up piggy perch as we landed them.

Our flounder numbers are definitely running behind the previous two years. We are still doing well when we target them but the incidental landings have slowed considerably. The best spots to target them recently has been the edges of the ICW and other channels. Getting farther into October and definitely in November, we should see flounder landings increasing as they begin to migrate toward the Gulf for their annual spawning activity.

The best places to target migrating flatties will be Port Mansfield’s East Cut and the Brazos Santiago jetties during periods of peak outgoing tide movement, especially during new and full moon. Targeting them on days following the passage of strong cold fronts, when tides are draining from flats regions through small guts and sloughs, is another good plan. Patience is required! Flounder can be notoriously stubborn unless your lure hits them on the nose.

I would like to remind everybody that wader season is right around the corner. Down here on the Lower Laguna, wet-wading traditionally comes to an end any day during the first half of November, and much earlier farther up the coast. If you might be in need of a new pair of waders for late-fall and winter fishing, I highly recommend visiting one of Fishing Tackle Unlimited’s three stores in the Houston area. FTU stocks the full line of Simms G3 and G4 waders and wading boots. Hands down...Simms are the best money can buy!