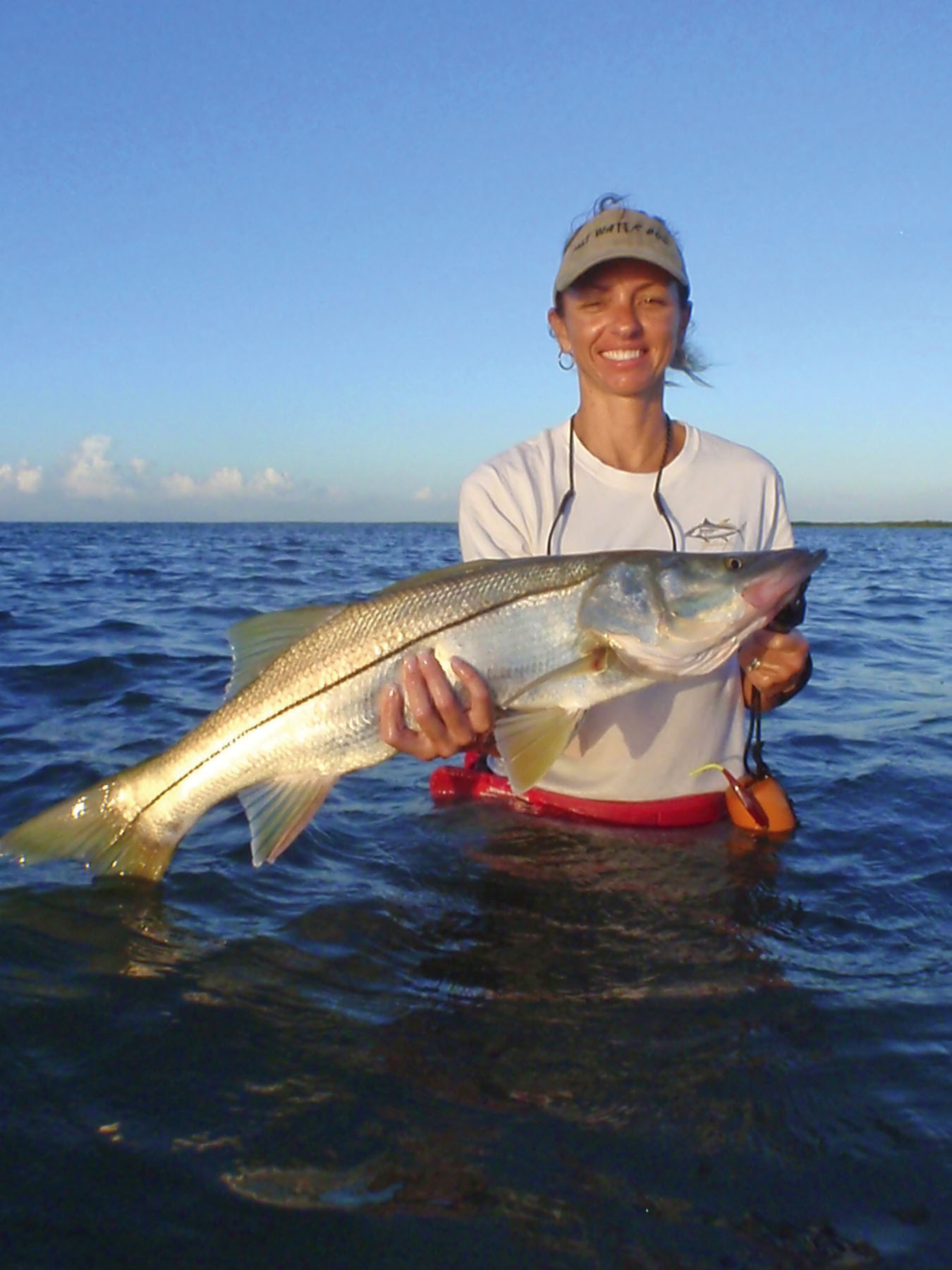 Michelle Hominga landed and released this beautiful 12.5 pound snook fishing with the author; our heaviest so far this year.
Here we are already headed into the month of September, a month which will bring us a bit of transition, in hours of daylight at least. Compared to the longer days of summer, these will be shorter days indeed. We have had a wet summer and long term weather statistics tell us we should expect additional rainfall in September which will add to the substantial amount of freshwater that the Lower Laguna currently contains. Thanks to June's Hurricane Alex and July's tropical depression, salinity levels were considerably lower than normal during much of summer. The Laguna salinity has been recovering although there is still plenty of freshwater being pumped into our bay system by the Rio Grande River. The Rio Grande empties into the Gulf and finds its way through the pass and also feeds freshwater into the Laguna Madre through the Arroyo Colorado just south of Port Mansfield. All this freshwater has caused a brackish stain in some areas, especially near the mouth of the Arroyo, and along the ICW. Don't let the color of the water fool you, though. The fish are still there!

If I had to use only one word to describe fishing in the Lower Laguna over the past month or so it would be, inconsistent. Until recently our water level was very high, giving the fish plenty of room to roam and hide from us. Just when you thought you had them figured out with a couple of good days in a row; they were gone the next. There have been some great days of fishing, but many really slow ones too. Overall, the fish have been quite hard to pattern consistently. Far from all bad, the high waters did give us a chance to explore areas that are normally inaccessible because they are too shallow or even completely dry, and we found some really neat areas that produced some nice fish.

The conditions have been generally calm for several weeks and this has allowed lots of sight-fishing opportunity in shallow coves and back lakes. The reds have been staging in these areas due to the unusual supply of shrimp and crabs. Being cautious, alert, and very quiet has been the key in getting on these fish. We have been throwing the Super Spook Jr. and when the fish have been real spooky a bone-colored Zara Pup has usually tricked them into biting. If you enjoy stalking reds in calf-deep water as they cruise shorelines, this method is usually productive 'til about mid morning. Then it's time to head out to waist-deep water where trout fishing has been best. If you notice only slight or sporadic surface activity, soft plastics on 1/8 ounce jigs worked near the bottom will usually do the job. Lately, trout have been easier to pattern as the redfish have been scattered on the flats although schools of redfish can occasionally be found by their wakes when the water is slick. Big trout are still being caught in deep potholes, and the sizes of some are impressive for this time of year. Despite an overall inconsistency in the fishing the last few months, we have experienced a fair share of anglers with their personal best on trout, reds, and snook.

I expect water levels will rise above normal again in September. Look for trout to hang around grass beds and sandy potholes in three to four foot depths. Continue searching for shallow reds in the back lakes; the tailing action should improve. Also, watch for large congregations of redfish in the deeper flats. In my honest experience, September has always been the toughest month for finding clear-cut patterns, but because of all the freshwater we've had, the bait population is in great shape! Remember, sometimes it pays to match the hatch. Pay attention to the signs around you.

In closing, I would like to thank Brownsville's IBC Bank for sponsoring and putting on a good showing in the 71st TIFT Tournament. IBC's own Lee Reed placed second in the men's bay division, and Nick Villarreal bettered last year's results by placing second in the youth division. Also, I attended ICAST in July and saw first hand some of the new products coming out in 2011. I was impressed by the new Suffix braided line and the new 580P Costa del Mar glasses that are extremely lightweight, impact-resistant, and durable (thanks to their new lens coatings.)
Don't let the freshwater and high tide levels keep you off the water. Fish hard and look for the signs that will bring you success.