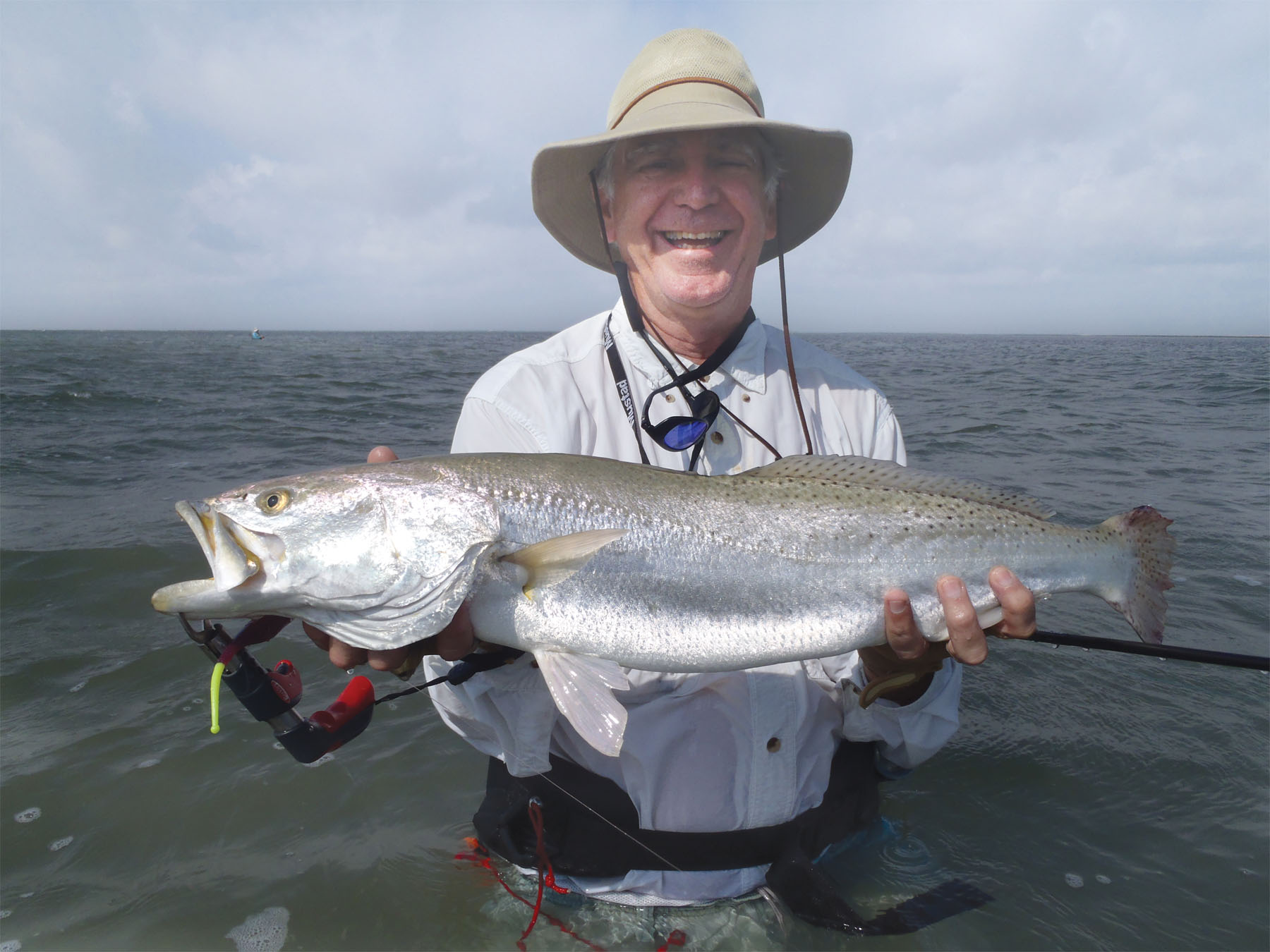 I'm guessing by now everybody is hoping September will bring some relief from the August heat. Traditionally September is a rainy month and I too am hoping for a few days of cloud cover and showers. I have to say though, as hot as the weather has been lately, the catching has been right there with it. Like I said last month, staying hydrated, using good sun protection, and wet wading will help get you through the dog days and a good tug on your line takes your mind off it.

Even though we will be seeing higher tides on average as September rolls along, the feeding patterns of our trout and reds should remain about the same through the first two weeks. I will continue to plan early starts for my fishing days to take advantage of the early morning feeding. Getting out there early not only puts you where you need to be when they're biting but it is a good plan to avoid the floating dead grass that always seems to get worse as the day warms up. Being able to spot the wakes of fish moving across the flats is another good reason. This opportunity fades quickly toward mid-morning as the wind picks up and the surface becomes choppy.

Redfish continue to be very abundant for us and if September holds true to form it will be another great month for locating schools prowling the main bay shores and all the backwater areas. Some of my favorite waters this time of year are the flats and back bays up around the Arroyo Colorado. Even though these fish might be hungry and tightly schooled, you must still practice a stealthy approach as an entire school can spook just as easily as a wary single. Small topwaters such as the Spook Jr. can be very effective but for clear shallow water it sometimes takes some trial and error to figure out how they will want it, especially on calm mornings. Sometimes a fast retrieve excites their predator instinct to strike, but other times fast moving surface baits will spook them completely away. I tend to experiment with different retrieves to find out the desirable action and always ask my clients that are having more success as to how they are working their bait. If we are getting lots of blow-ups and no hook-ups, then it might be a good idea for someone to throw a plastic tail to see if that's what the fish want.

Our trout action continues to be very pothole oriented and when the water temperatures get as high as they have been you can bet they only eat when they are good and ready. Early mornings we have found them shallow (calf to thigh deep) on topwaters, and by mid-day our efforts then have turned to deeper water (waist to belly) throwing dark Kelley Wigglers on 1/8 oz jig heads. Do not be discouraged if the trout seem only to slap at your topwaters, at least you know they are there and you can adjust your presentation to make them bite. Late summer has never been known as prime time for big trout but as you see from the photos here we are still finding a few. I believe that September will bring us more of the same and limits of nice fryer size trout should remain very common.

Getting down to the nitty-gritty; plan for higher tides toward the end of the month and do not be surprised if a tropical depression or storm dumps a ton of rain. We may see some scattering of the trout and redfish we have been on if the tides push up abruptly to unusually high levels. Higher water levels will give us access to backwater areas we have not been fishing and quite often as the tide rolls in there it carries lots of bait and the redfish follow right along. The beginning of the new school year along with the coming of football season and dove season always means fewer boats on the water and this can have a very favorable impact on the quality of fishing. Shrimp migrations are often strong during September and this can put the trout and reds on feeding binges marked by flocks of gulls hovering over them looking to steal anything they can grab.

Just because the calendar says summer is over do not be fooled into thinking fishing is also over for the year. September can be a great month here on the Lower Laguna. Good fishing to you!