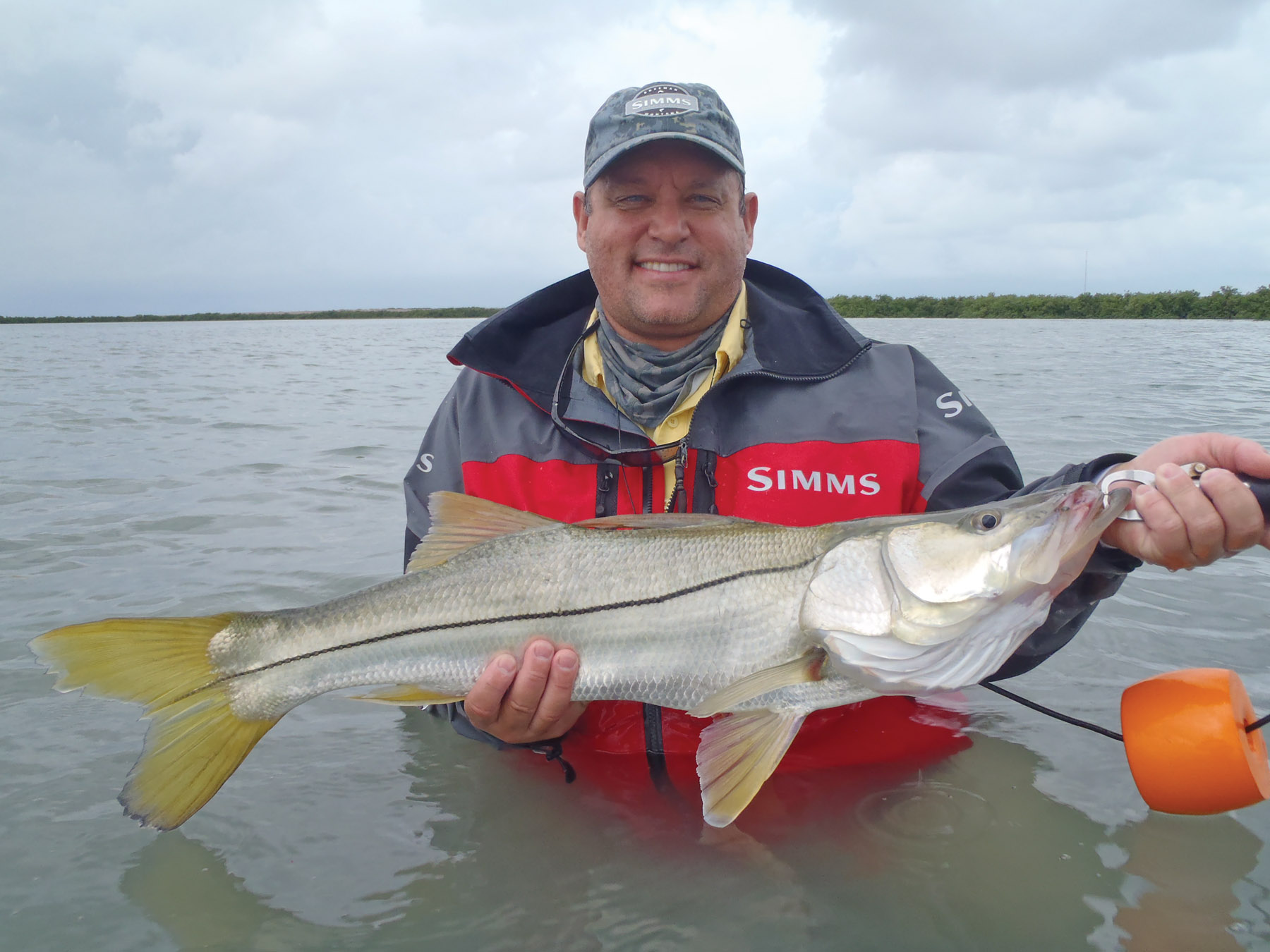 David Brysch on a stormy weather day; almost 34-inches and a whopping 11 pounds!

Aaron and I sat at the table after dinner sharing stories and comparing notes about the day each had experienced on the water. The feeding patterns observed and what we tried led us to agree we've been on an unusually tough two-month stretch. To Aaron's credit I can say he's been on good fish even on the toughest of days. He has been consistently finding redfish when few have been able and his trout catches have been equally impressive. So you could see where he had my undivided attention.

Longtime readers will remember Aaron as a former youth-writer for this magazine. He is now in college and guides part-time. Many-a-day I towed him around on an inner tube wade fishing and today he schools me at the dinner table.

We agreed that fish have not been in their usual places for this time of the year; and when you did find them there they do not hold for long. In my opinion, this is because of the heat, heavy boat traffic and lack of seagrass in lots of our flats around the Arroyo Colorado. I believe they have relocated to inconspicuous places that we have always passed, never giving a thought that fish could possibly hold there. In our defense we never had to look this hard.

Anyway, back to the conversation, one of the keys to Aaron's success has been the tide level. As he explained, he has been using the tide to determine where these fish could be holding. From our conversation, he has not been looking far from where they should be, but what he is looking for is any change or reason in the water that might perhaps attract fish or cause them to relocate. This change could be as simple as a grass line, a spoil that always goes unnoticed, a drop or hole along intersecting channels. A classic example; he explained how everyone is looking for fish on popular clear flats that get run over countless times throughout the day. He believes the fish are being pushed off to slightly deeper, off-colored water. It helped that a nearby shallow spoil area caused many boats to steer clear and thus leave it undisturbed.

He mentioned several spots that have produced excellent catches on the toughest days. He further pointed out that he waits on the tide to be just right. If it's too low he waits till it comes up. He also mentioned that the heavier the boat traffic tends to be, the better chance that these fish will be there.

I mention this, not to pinpoint coordinates, but to get you thinking outside the realm of your normal spots. Heck, my conversation with my son that evening got me to think outside my box and want to try some new spots that I had never fished.

Trout numbers continue to be good but be prepared to sort for good ones. Flats near the ICW continue to be productive when the water is moving. It's a good thing that some of these flats still have patches of grass. Dragging soft plastics along the grass has been a sure way to entice a strike. Besides keying on grass and water movement, we have focused on depths where bait is holding. I begin my days spreading my fishermen at different depths to determine which will be most productive. Look for this pattern to continue into September.

September has to be my least predictable month as it includes transition from summer to fall patterns. There will be lots of bait making it challenging to get the fish to bite. Expect lots of freshwater from storms and higher than normal tides. The good news is boat traffic will be lighter as many outdoorsmen will begin their hunting pursuits. Fish will not be as spooked or nervous as they were during the busy past few months. Not being as finicky will improve the topwater bite, even in the middle of the day.

I always like to mention products that I test on the water. By far the best shirt I own is the Simms Glenbrook shirt. It's comfortable, very light and cool. It dries quickly and stylish enough to wear for an evening out. Check it out at simmsfishing.com or if you're in the Houston checkout the extensive Simms display at Fishing Tackle Unlimited's two locations.

In closing, the hunt for fish has definitely been a grind lately, but whether it's hard or easy, always try to make it a safe and enjoyable experience.