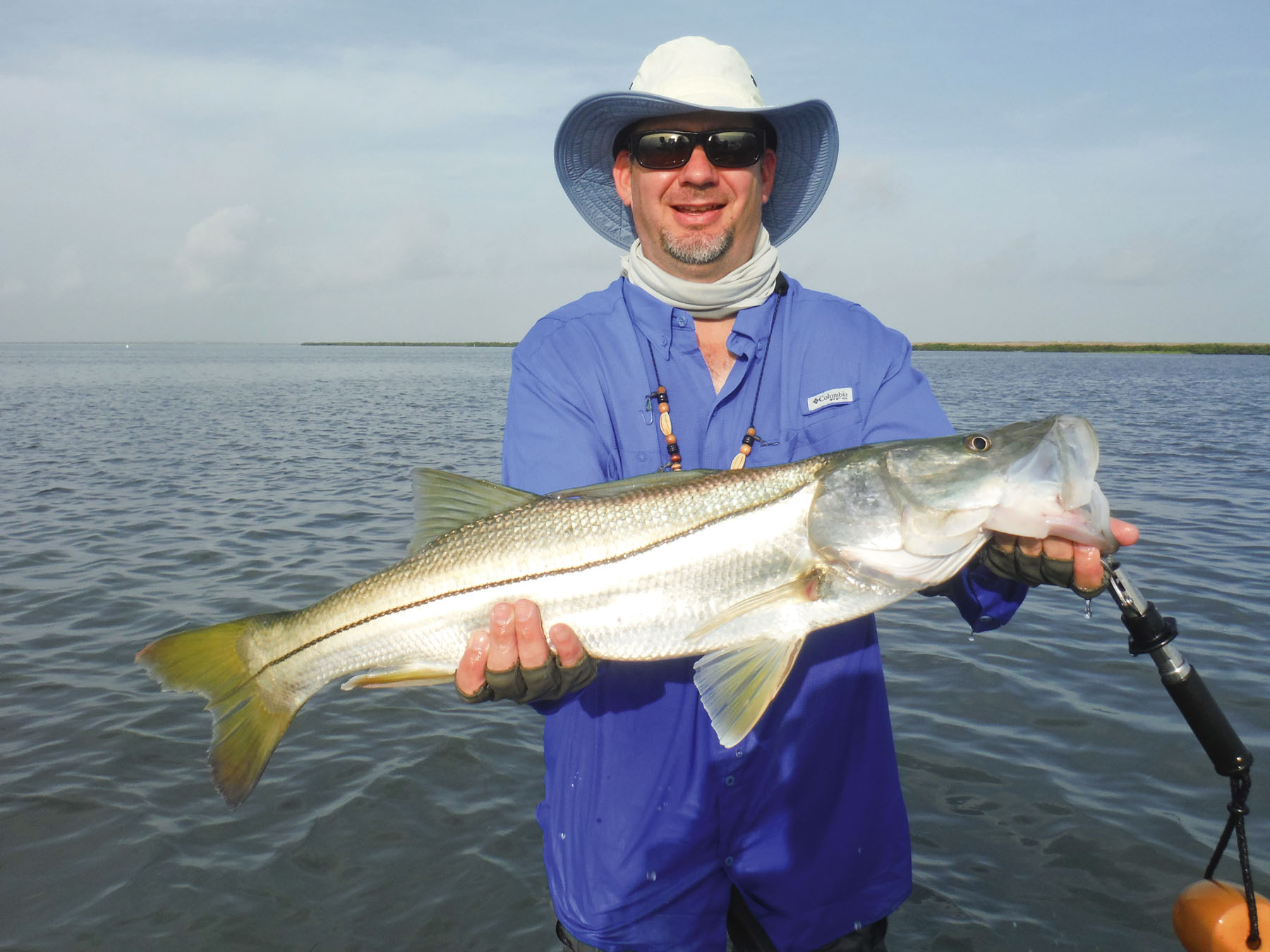 Rusty’s 31-1/2 inch snook was fooled by Super Spook Jr.
Everybody has their favorite month for fishing and mine is February. On the flip-side, when asked which is my least favorite, based on past experiences I will often say it would be September. This is not to say that I have not had great fishing in September; I say it because September has potential to bring a lot of unstable weather. Tropical storms and hurricanes anywhere in the western Gulf can push Laguna Madre tides way above normal and storms that impact this part of the coast more directly can create a lot of runoff and significant changes in salinity. When this occurs we are usually confined to fishing closer to the passes where the exchange of tides lends to more stability–Mansfield's East Cut and Brazos Santiago Pass at Port Isabel.

Even though September can sometimes throw us some tough curves weather and conditions-wise, I am very hopeful it will be different this year. Fishing on the Lower Laguna Madre has really taken off in the right direction after suffering a tough period the last couple of months. As a matter of fact, aside from a few slow days, and I blame these on poor tidal movement and strong wind, the past several weeks have been very good. Redfish numbers have been off the chart and the size of the trout we are catching and releasing has also been very good.

The wind continues to blow down here more often than not but on calm days the wakes of redfish on the flats have been much easier to find. Though the schools are smaller than in the past we are seeing them in more places lately throughout the Laguna. The surprise is how shallow they've been holding, even during lowest of tides. With school and dove season reducing the boat traffic on the flats and the tides returning I am hoping this will get even better. Currently, the East Side sand flats are holding good numbers of reds from sunrise till mid-morning. Late afternoon we find them belly-deep over sandy-shell in sandy-looking water. Large potholes off the edges of the ICW have been holding schools of redfish and plenty of singles. As water temperatures begin to cool I expect these deeper-holding fish will move onto shallower flats areas. The late evening redfish bite under birds has been very good–best I've seen in a very long time.

What has us really excited is the size of trout that have finally showed up on our flats. Reports, photos and recent catches from my clients have revealed great promise for the future of our trout fishery. It was awesome in the months of July and August as we caught some beautiful fish on small to mid-size topwaters. The Super Spook Jr and the Heddon One Knocker Spooks in redhead, bone, and anything with chartreuse and pink have been very good lures for us. With the amount of floating grass we have been facing the switch to single hooks makes a big improvement. Spoil edges and guts off the ICW have been producing good numbers of big trout as well as adjacent grass flats with numerous sand pockets. The bigger trout have been way more predictable lately than they were in the spring. The only drawback is that they have lost a lot weight from spawning. With fall coming and winter sneaking up before we know it, I am excited to say the least.

Snook fishing has been a great disappointment this summer. Numbers in general and especially the size of the fish have been very substandard compared to the past three years. My dedicated snook charters have always been 100% catch and release in hope that this fishery would continue to thrive; so for all that we've given back it is agonizing to see them in such decline.

On the brighter side, along with the improvements in redfish opportunity and the excitement of so many big trout, our flounder fishing has improved to the point that we can target them specifically on spoil banks and deeper guts along the many of the major channels. And while all this is going on, if you're interested in hard pulls and long fights with the silver kings, September is a great month to look for tarpon rolling and feeding near the tips of the jetties at Brazos Santiago and the East Cut. Fishing opportunity in the coming month has me very excited. Come join the hunt... on the water that is!