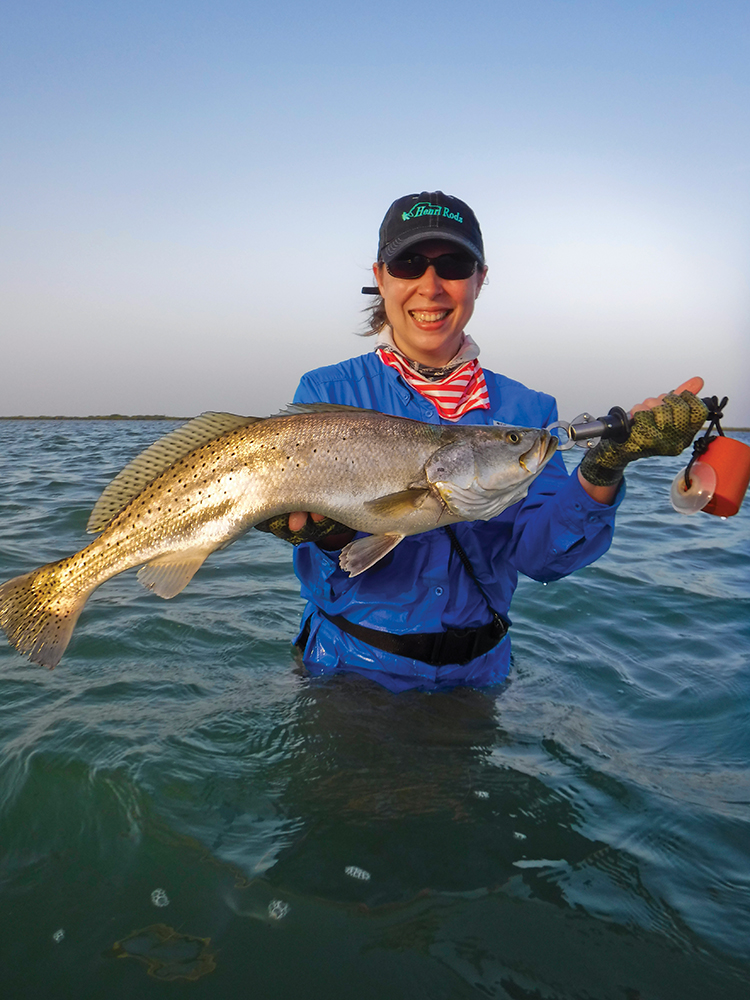 Kristian Faulk landed her best-ever trout at 7 lbs the day after her snook.

Recently back from my annual Florida Keys fishing trip and reflecting upon what I saw and enjoyed, something that impresses me more each time I go is the conservation ethic of the guides over there. They completely understand that continued success in their career and livelihood depends on the health of their fishery. They get it that in their profession a live fish is far more valuable than a dead one.

When I first started guiding, anxious to be seen as a capable guide, the more fish I brought to the dock the better – or so I believed.

After quite a few years of this "kill ‘em all" mentality, I eventually matured and realized that fishing should be enjoyed today, tomorrow, and for future generations. There is nothing wrong with taking a few fish for dinner, but I see it as wrong to take fish just for the applause, not to mention the possibility of going to waste in the freezer.

I have never forced my views on my clients, aside from the requirement to release all snook and speckled trout over 23-inches on my charters. I choose instead to lead by example and educate those who will watch and listen. For those of us that have fished the waters of the Lower Laguna Madre the past 20 years; we saw the glory days. Catching was easy almost anywhere you fished. Fast-forward to the present; it's a grind more often than not.

Targeting redfish has become easier since my last article and, if the normal fall pattern continues to develop, we should see continued improvement through September. September tends to be a wet month for us which means lower salinity levels on average, especially in backwater areas where runoff is higher. This is a good thing for the estuary.

The reds are now showing in small schools in less-trafficked areas with deeper potholes, near spoil banks, and defined grasslines in open water. On calm days it’s as though somebody opened a gate and the reds suddenly show up, waking across the eastside flats. Our catches have been best around deeper guts that have shallow water nearby. Google maps is a good resource for locating this type of bottom structure.

Small topwaters have been good during early morning hours but the action fades when mullet become less active on the surface. I have been using a new surface lure from 13-Fishing that will be released soon called the Dual Pitch. I describe it as having a tight walk-the-dog action and sits low in the water at rest. The bait levels out as soon as you start working it and produces fish-enticing action. I have thus far caught redfish, snook, and trout with it.

Last year around this time we experienced a good run on big trout and this year is the same. Not as many as last year but considering how hot it has been it amazes me that we are catching any decent size trout. Early morning water temps have been running 80-82° which has been cool enough for trout to feed on the surface as well as below. From our catches, I will say the future of our trout fishery looks encouraging, especially with the numbers of small trout out there.

Trout can be found feeding shallow early in the day but they move deeper as soon as the sun warms the water. If there is a magical depth right now for getting on good trout I would say around waist deep. Checking water temps throughout the day I have noted decent action on mid- to upper-slot trout with water temps even at 90° but the key to this has been tidal current. You need the water to be moving. Even with these elevated temperatures they will take soft plastics worked near bottom. Hopefully, with air and water temps declining slightly in September we will see even more consistent catching.

One good thing that hotter water temperatures bring is a great snook bite during the spawn. In my opinion, this summer has given us the best snook bite in the last seven years. The peak of snook spawning occurs in September and October, which could mean the best is yet to come.

My visit to ICAST was another great one. Look for an outstanding presentation of new products in January from a host of great companies including AFTCO, Simms, and Costa Del Mar.