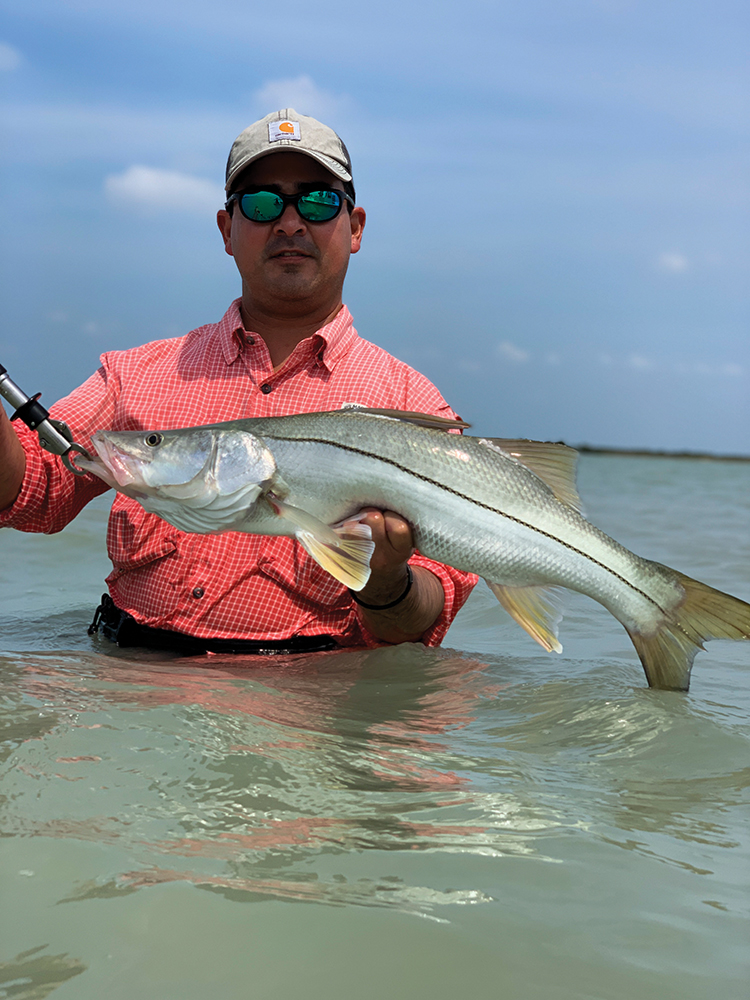 Mauri Rodriguez displays one of a pair of snook he landed on a recent charter.

September rolls around and kids and redfish head to school. Kids are in classrooms while the redfish gather in large groups preparing for their annual spawning run. A welcomed change will be noticed by year-round anglers as lines at boat launches shrink and the number of boats on the water become fewer. Many anglers will exchange rods and reels for shotguns and rifles. Another noticeable change will be days becoming shorter and temperatures dropping a few degrees. This always has a profound impact on fishing success.

Fewer boats buzzing across the bays will allow fish to congregate in greater numbers for longer periods. One of the first signs of this is seen in redfish schooling behavior as I mentioned above. This change, along with slightly cooler water temperatures will also encourage speckled trout to return to shallow flats rather than staging in deeper water as they have done much of the hot summer.

Our redfish population right now is looking solid and has rebounded pretty well, in my opinion. It's not easy limits every trip but our catch ratio has undoubtedly improved when compared to the past two years. We have yet to see any of the huge herds that roamed the flats years ago but we are currently catching decent numbers from smaller schools. I will also point out that most of our success has been coming in tucked-away places, only a few occasions on open flats.

Our best catching conditions seem to have been enhanced by tide movement and periods of lower boat traffic. Moon phases have also played a role. During the recent full moon the bite was best in midday hours and again in late evening, both of which were predictable. Puzzling to me is how the redfish have been acting during recent new moon periods. Typically on new moon we expect a steady bite throughout the day but that hasn’t been happening. Many times we struggled all day until they finally turned on in late evening. Goes to show we still have a lot to learn.

I am grateful that we have a healthy trout fishery. If numbers of small fish coming to hand are any indication, I would have to say the future of this fishery is very bright. Surprisingly, along with all the small trout we are finding everywhere we fish, we are also finding better than average numbers of trout of the mid-twenties-inch class and a few even longer. Better than average for summertime, anyway.

The ideal water depth for finding trout action has been running thigh- to waist-deep. The best baits have been KWigglers Ball Tails and Willow Tails; Plum-Chart, Turtle Grass, and Mansfield Margarita. I expect to see them moving shallower as September rolls along, once the water temperatures begin to recede a few degrees. I expect to find the bite becoming more aggressive later in the month and increasing willingness to take topwaters. Slicking also becomes more prevalent in early fall, coinciding with increasing feeding activity.

In our other species category, flounder and snook both seem to be thriving. Snook landings on my charters throughout summer have been rivaling what we enjoyed ten years ago, and that’s saying something. Let me put it this way – snook encounters have become so common that we are running 100% on at least one angler per charter catching a snook, sometimes several. Bear in mind that we do not target snook on every charter; neither do I allow snook to be retained on my charters. Snook fishing on my boat is all CPR!

Moving on to flounder, I am pleased to report flatfish numbers have been very impressive since mid-summer. This comes as a big surprise given that we had a couple of lean years prior to this recent spike. Catching them was a tough gig…no pun intended. With this fishery in the shape it’s in we are once again able to purposely target them. We hope this trend continues but we must be willing to do our part. I like to live by the creed of keeping only what I'm going to eat fresh and releasing the rest. If more fishermen will do this I believe it will help this species continue to rebound.

The Lower Laguna is in great shape with plenty of forage available for our game species. Large schools of mullet are everywhere and we are kicking up shrimp as we wade. Piggy perch are constantly nipping at our soft plastics – and we’re catching lots of fish. Whether you're planning to hit the water or chase doves this month, get out there and enjoy it while you can.