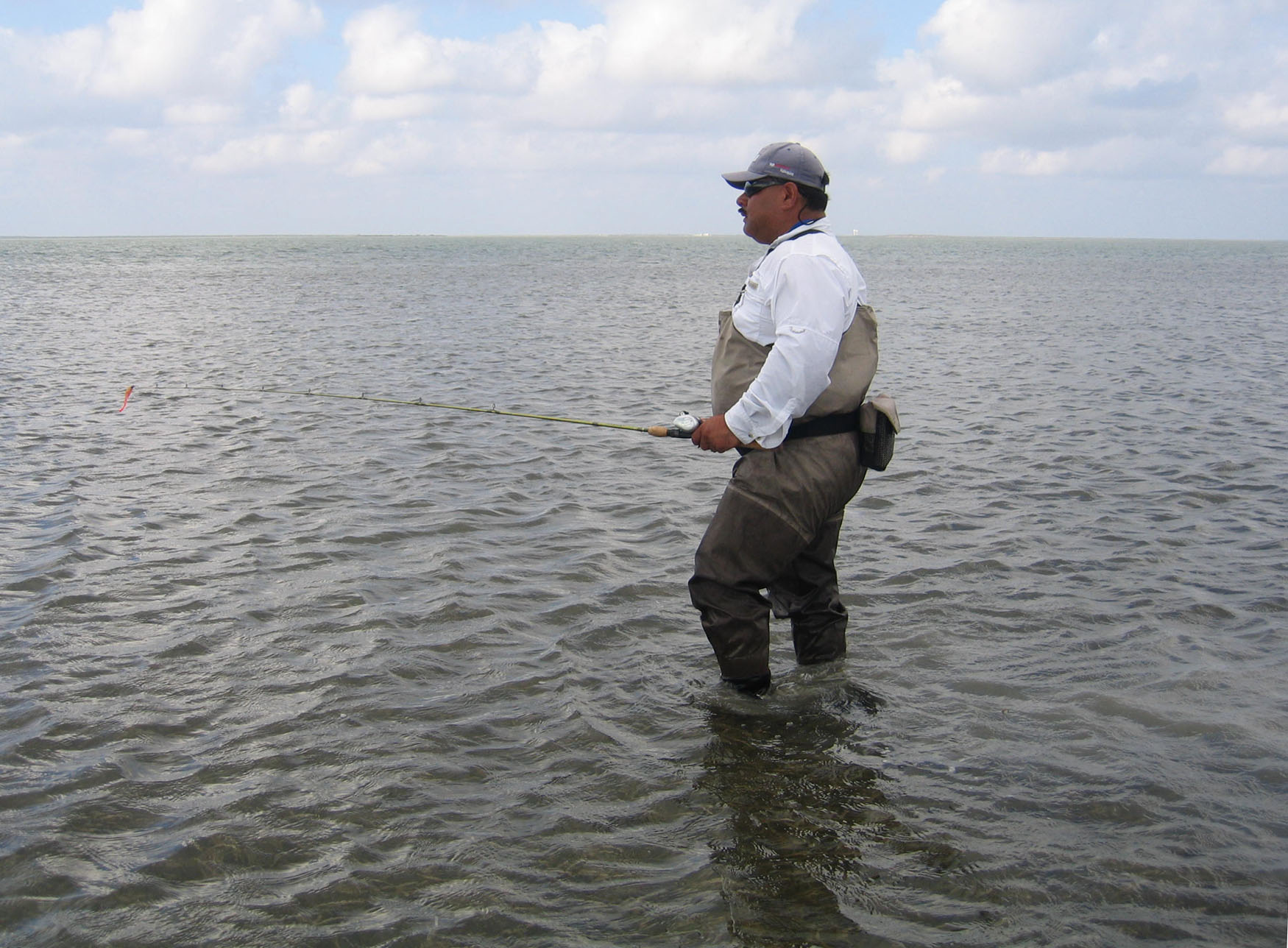 The shallow end of spoils can be productive on a high tide.
November and December have passed and for the most part they were everything that we had been anticipating. As of this writing we have been seeing lots of solid 22-25 inch trout with a few trophy-sized fish mixed in to keep everybody smiling. Right before the first good northers hit we were doing well with topwaters, but as our water started to cool down the soft plastics took over as top producer. This is not to say that surface plugs won't work in winter, but it does pay to be selective. Warm winter afternoons will bring baitfish to the shallows and they will also become more active on the surface. You might even hear some tail slapping as bait is trying to scurry away from hungry predators. If I begin to hear and see enough bait on the surface, I will be quick to slip on a topwater. Absent these signs, I am more apt to be found with a plastic tail, Corky or Corky Devil at the end of my line. Regardless of the bait used, the slower presentations get rewarded most when fishing cold water.

Think back to when you jumped in the shower on a cold morning only to find the hot water had been used up. How would you describe the feeling of cold water running down your back? I mention this because fish are quick to notice a change in their environment too. The drop in water temperature causes a fish's metabolism to slow down. For this reason, during a post cold frontal period, I like to target areas where the water will be a few degrees warmer - muddy shell bottoms, muddy depressions where the water is slightly deeper, muddy points that lie close to muddy drop-offs. In general, I would say our most productive depths in winter range from thigh to belly deep.

Having an eagle eye for even the slightest sign of bait activity can be the key to the entire hunt. Keep your eyes peeled and ears open because the signals are sometimes few and for some reason they tend to occur the moment you relax. A few days after the front goes through and things begin to warm again I usually leave the mud and head toward shallow flats that contain potholes. Fish have a tendency to lie on the bottom of these sand pockets and soak up the sun on a warm afternoon waiting for their next meal to swim by. Hopefully, it's your bait they find.

I have already mentioned several types of structure and water depths in which you might be able to find fish during the varying conditions of the winter season. Now we're going to jump into a discussion of dredge spoils. I would have to say that my greatest winter wading experiences have been earned while working the spoils that dot the edges of the Intracoastal Waterway and there is good reason for this.

Spoils lie near deep water that fish like to use during cold weather periods. Spoils attract and hold lots of baitfish. All species, bait and predators alike, will slide up and down the drop-offs as the water temperatures change. Many of our spoils offer easy wading, but you've got to know which ones; pick the wrong and you could sink to your knees, maybe deeper. There is only one way to find out which spoils have a good bottom and that is to get off the boat and get your feet wet.

Spending time on your feet helps you discover drops, points, grass lines and guts that could hold big fish. On incoming or flood tides, I like to concentrate my efforts right against or very near the spoil banks. On falling tides I usually retreat to grass lines, slight drops in depth, hooks and points that lead to deeper holes, or even guts where the tides tend to move faster. With the right conditions, any of these patterns can bring some hefty dividends.

I'd like to share a little tale of the way winter sometimes works. Recently, I did a little bit of scouting for some upcoming trips. The weather was not all that great; drizzling off and on and fog rolling in most of the day. The water was a chilly sixty-five degrees; down 10 degrees during the past 48 hours and it seemed that every creature in the bay had relocated to deep water. I had jumped off the boat a little after 8:00am and fished hard by myself all day long. I saw very little bait activity and my first of only two bites came at noon time. It was a twelve inch trout that brought hope that a bite might just start to occur. Well, I was wrong. My next bite came a full two hours later, but it was the fish I was after. Working a soft plastic along a spoil ledge where the water went from waist to chest deep within a matter of a few feet was the ticket. The trout measured in the twenty-seven to twenty-eight inch class. After releasing her and grinding for another hour, I called it a day. Some days you have be ready to grind it out. The fun part of fishing is you just never know when the dividend will come. I like to put it this way, "You're one cast away from the fish of a lifetime all day long!"

Before I close I would like to mention a product called Quickswirl. For many years I have tried every device I could find that would make it easier and faster to change lures. Using the Quickswirl I have landed redfish, trout, snook, and even a twenty-five pound tarpon with no fish lost due to product malfunction. The design of the Quickswirl has two and a half twists around the shaft which makes losing a lure very unlikely. I have tested them with topwaters and plastic tails and have not noticed any problems with the Quickswirl altering the action of the lure. Go to www.quickswirl.com and see for yourself.