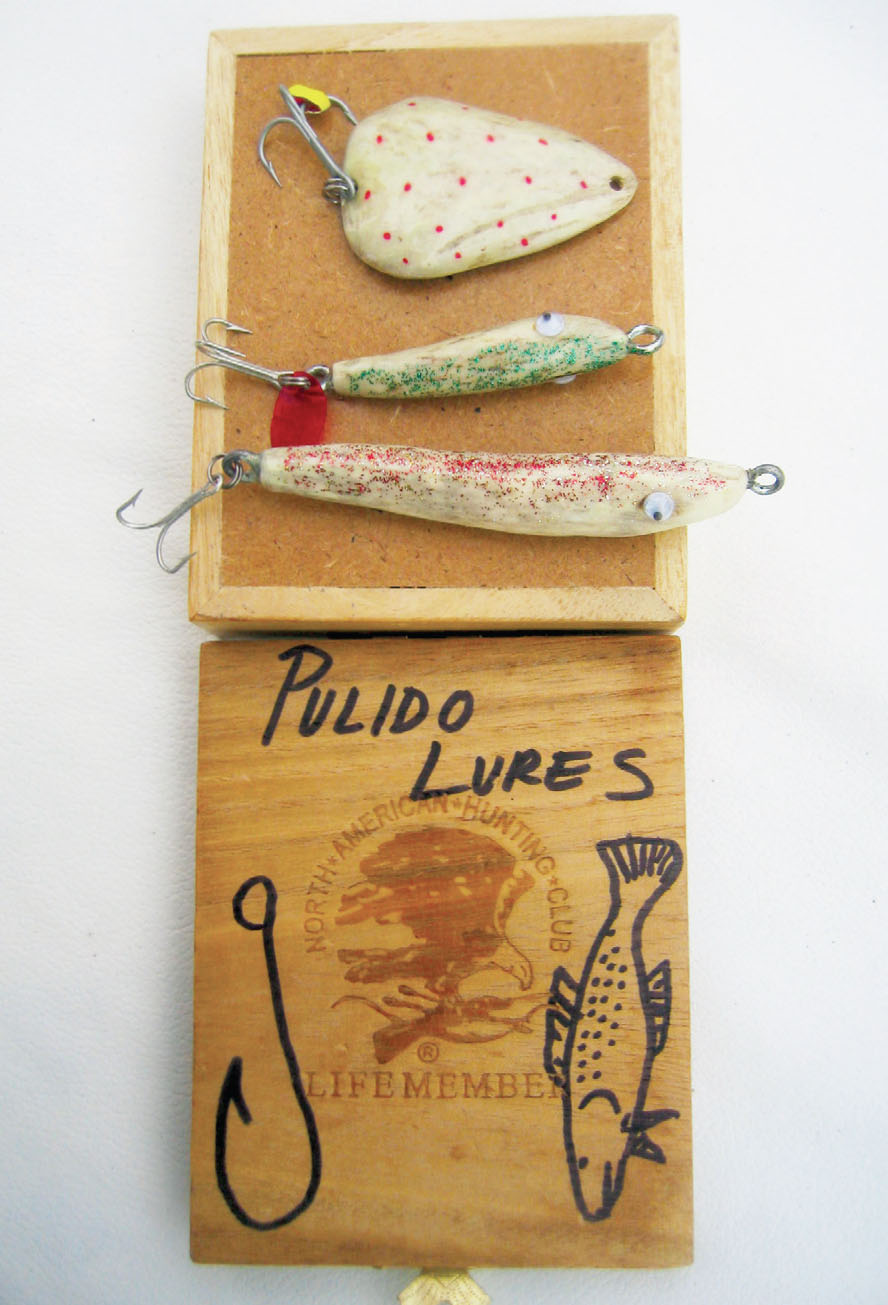 Pulido’s homemade antler lures do catch fish.
Hopefully by the time you read this the winds of spring will have subsided and the summer patterns have set in. All those windy days brought us some tough fishing to say the least. We did however manage a few days when it wasn’t blowing thirty-something to enjoy some bird action in the back bays. If you have never seen fish under sea gulls with their tails sticking out of the water, it’s something that needs to be on your list.

As the bay waters warmed above the seventy degree mark
here in the Lower Laguna Madre, the bigger trout bite suffered a bit, but the number of bites from solid keeper-sized fish was not affected at all. The redfish numbers continue to look very healthy as they have all winter and spring. In the months of April and May most of our efforts were concentrated on pothole-ridden flats and bait infested shorelines. Anytime we experienced the trout and reds just toying with our topwaters a switch to soft plastic would always entice a few of these non-aggressive strikers.

In June, redfish start to school up in large groups throughout our area bays. I remember the late Captain Dan Colley saying, “When the silos start working, and the cotton harvest begins, that’s when the redfish start schooling up.” He was right- give or take a week or two.

Capt. Dan taught me something with that comment. There many signs in the natural world and our everyday surroundings that can serve as reminders of fishing patterns that run in parallel to the seasons.

What do I mean by this? As I start to see the cotton being harvested in the summer, I frequent certain areas and look for redfish schools that showed at the same time during prior years. During June we expect calm to mild breezes in the morning and this makes the schools easy to locate. If you happen to find one, the best way to fish for them if at all possible is to hop off the boat and wade slowly into them. A stealthy approach will always bring you better results. Drifting over them can also bring good results, but make sure you don’t run close enough to spook them as one good spook can ruin the bite for hours.

Currently we are fishing areas holding hordes of small bait. The mullet are balled up and pretty active early in the morning, so naturally we’re getting lots of action on surface lures. A can’t miss bait seems to be the bone-colored Super Spook Jr, and the chrome with black back has been very good too.

Productive areas have been just about any windward shoreline where you can see lots of active bait. Quite often we are finding the bait being blown out of the water by aggressive trout and redfish. This is a clear indication of fish present and a good bite in progress. If the area has scattered potholes it is even better. Most of our heavier trout have been coming from areas such as these. The productive depth of late has been about knee deep, but this is due to change. As we get further into June and the water temperature continues to climb, I recommend starting in the cooler shallows early and then working deeper as the day wears on.

Sightcast fishing will definitely be in the cards for June. As I said earlier the mornings should be very calm and this can call for special tactics. Remember that when the water is slick-calm getting close to fish can be difficult. A quiet approach is critical; matching the hatch or using the right size bait is equally important. If a small topwater seems to spook your target, try switching to small plastic baits or even a 1/8 oz gold spoon.

Sometime in late June our bays waters will begin to recede to their summer low levels. If you can catch the tide at its lowest point and know where these fish relocate during these lower than normal tides, you can bet you found yourself a honey hole. Find out where all water goes as the tide recedes. Small guts, drop offs, edges of the ICW, fairly large potholes, etc. are excellent places to find fish during extremely low tides. As the water comes up during the day, grass flats will come alive and a sure bet to find your desired species.

I would like to point out that the fun part about guiding is meeting people. Recently, I had the pleasure to fish with a fun group from the Valley. They didn’t care what was at the end of their line as long as it pulled. What made this trip unique was one of the guys brought a small box of homemade lures. As a matter of fact, the lures were made from deer antlers. Yes, that’s right I said deer antlers.

These lures were handmade by Tejano artist and legend Roberto Pulido. I have to admit I was pretty skeptical but I was also eager to see the results. We were wading along having fun and catching fish when one of the guys decided it was time to try the horn lures. It wasn’t five minutes later that he caught his first fish on one. You should have seen his face; it was lit up as bright as a full moon. He was excited as can be and proudly showed off his catch. He made a believer out of me. A lesson I learned is that when the fish are hungry they are not afraid to lock horns!