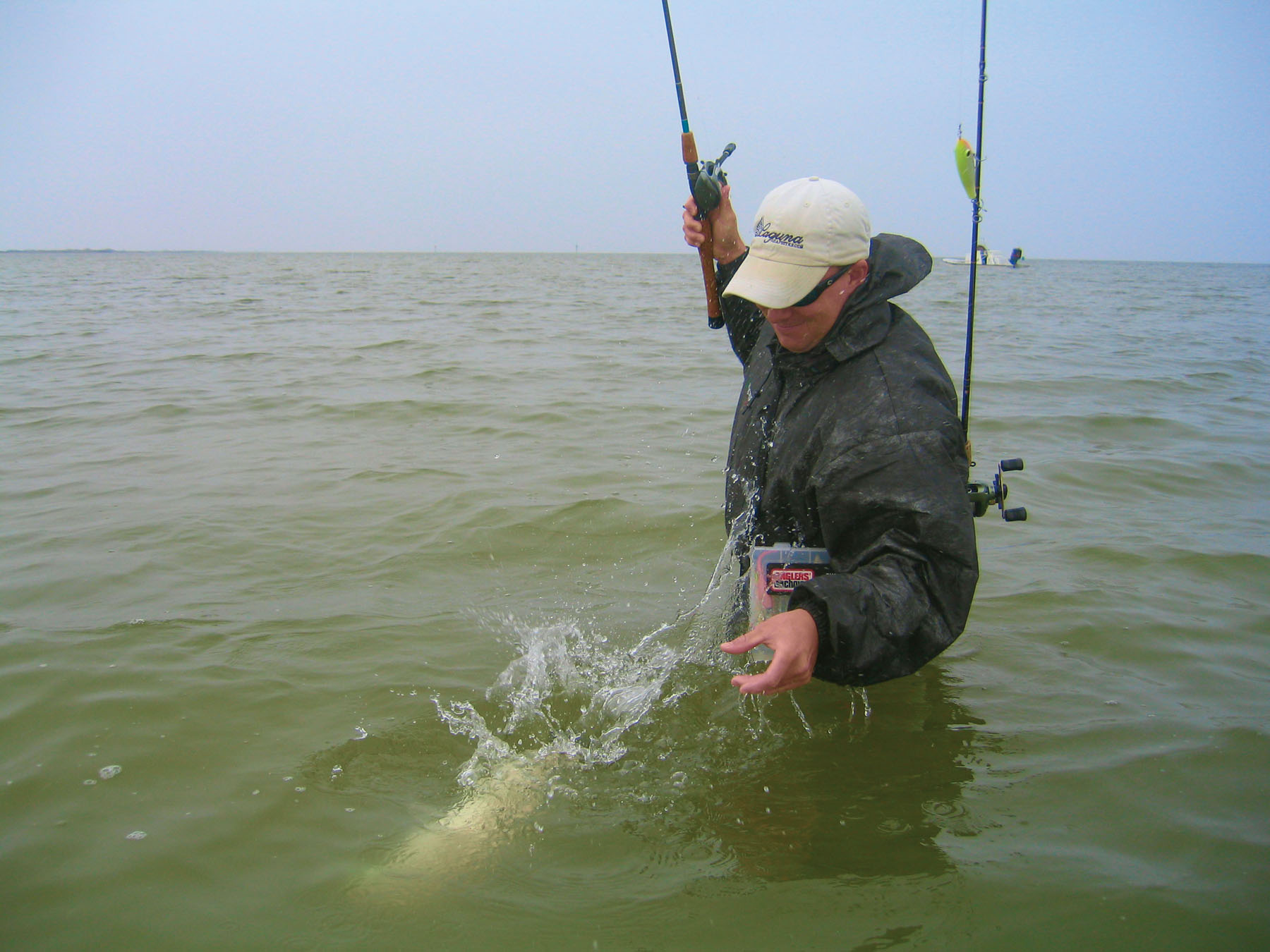 Sometimes trout can have the last word, as this trout splashed cold water on Jeff’s face.

When I think of March a most memorable trip comes to mind. I was drift fishing with a friend and his wife a few years ago in the beginning of the spring season. We were drifting over a shallow sandy bottom and we kept seeing balls of disturbed mud. The further we drifted into the shallow flat the more mud disturbances we saw. It was then that my friend's wife used a word that always sticks in my mind. She called the mud disturbances, or mud boils as most fishermen call them, mud puffs.

I immediately thought the same thing you're thinking right now. That word sounded like something we made up as a kid. Knowing what she meant, I still asked her what a mud puff was. She described it better than I ever could. Mud puffs are the sediments that are left behind when a redfish or other fish species high tails it from danger. In the spring, fish tend to rest on shallow bottoms and when they feel a threat they take off leaving a mud puff behind.

These mud trails can give you some indication as to what the fish are doing. For one- they are not moving much, which usually means they are not actively feeding or chasing bait. Your approach to these fish should be as quiet as possible and a low profile certainly helps your chances in landing one. Another thing to consider is that these fish could be basking in the warmth of the shallow water; when you see a few there could be many others.

This is a signal that your presentation should be made quietly without a loud commotion. Perhaps throwing out a little further than normal past the fish is a good thing when mud puffs are the norm. Remember- if all you're seeing is mud puffs and no bites are occurring, it could mean your approach is spooking them.

You might want to switch to a smaller lure or a lighter jighead. A quieter approach can be achieved by slowing down if you are wading or maybe attaching your drift sock to the transom. Most boats will make less noise when drifting bow forward. Even though your engine is not running, you should always slip it in gear when drifting. With the control in neutral the prop can spin as water moves through the blades; a spinning prop can alert fish to your approach. I've seen many days when paying attention to little things is all that's needed to get them into the biting mode.

This winter has been a rather cold one so far and the fish been displaying what I call a typically deeper water pattern. But, as the water begins to warm up the fish will begin to frequent the shallows more often, and this is where you can experience mud puffs for yourself.

During the past few months it was sure nice to see our bays empty of all the boat traffic that comes with warmer weather months. The cooler temperatures and wet weather we experienced in the latter part of January and February certainly caused most fishermen to stay home. Those that were brave enough to bear the cold were rewarded with days of gorging redfish and eager to bite trout. If you found a small break in the weather, it was well worth getting out.

Probing through extensive miles of flats that usually hold fish in the winter, I found that the fish bailed out to deeper water for an extended period of time right after the cold snap of January. The chilling water temperatures caused us to witness on several occasions miles and miles of dead water, not a single visible saltwater creature could be seen.

On the days that did allow us to get out we concentrated on guts with deep mud, areas around spoil islands that had quick access to the ICW. The bite was not an easy one, patience and perseverance was the key to acquiring late afternoon bites. But, one thing is for sure, when the fish decided it was time to feed, the action was incredible.

Recently, there was a five day stretched where my clients and I had some unbelievable action. And I bring this up to make a point, grinding it out and waiting for the fish to turn on can bring great rewards, but you've got to be willing to put in the time. I had just finished an outstanding two day trip and was looking forward to the next. Joining me on the next trip were Bill Wearden and Steve Hamman, they were anticipating a great day on the water, so was I. Our first couple of stops produced very few bites. But, in the back of my mind I knew I had an ace in the hole, a spot that had been producing good numbers of big fish. Around 1:30 PM, I headed in that direction. And before they jumped off I gave the guys the game plan and tried to give them a good visual map of the area.

I also commented to them if the action was like it had been, they might have their wives rub some Ben-Gay afterwards for their sore shoulders. They laughed it off and jumped out of the boat. It wasn't five minutes later that they began to experience what they said was their best fishing day ever. Every other or third cast was a redfish tugging at the end of their line; I could hear and see the excitement they were having. I gave up my rod and held my camera to record their memorable moment; by the way they weren't camera shy.

The very next day I fished with a father and son team whom are regular clients and understand the highs and lows of fishing. We hit a few spots without even a nibble, noon time was approaching and I decided to relocate to "the spot." I got off the boat with great confidence that the fish would be there. Well they weren't and it was already 2:30 PM and not one of us had landed a fish much less a bite. Talk about being discouraged and trying not to show it.

I knew they could not have gone far, so we relocated to another area near the dried out honeyhole. At this locale we were pleased to find more bait than all previous spots put together. Tying on Corkies and working the grasslines was the key to a very successful day on the water. The last three hours of daylight brought us not stop action on big reds and many trout up to five and a half pounds. Classic example of waiting for the bite to occur, most anglers would have put up their rod and would have said something along the lines of, "maybe next time." Well done Jim and Jeff for hanging in there and having what it takes to catch solid fish in the not-so-ideal conditions.

I hate to see February pass because of all the outstanding action and fun it brought us, but if February is a hint of what is to come, you too better go out and get you some Ben-Gay. Get out there and go find some mud puffs, but always remember, it's not about the mud puffs, it's about chasing the trout and redfish that pulled the disappearing act in that puff of the mud.