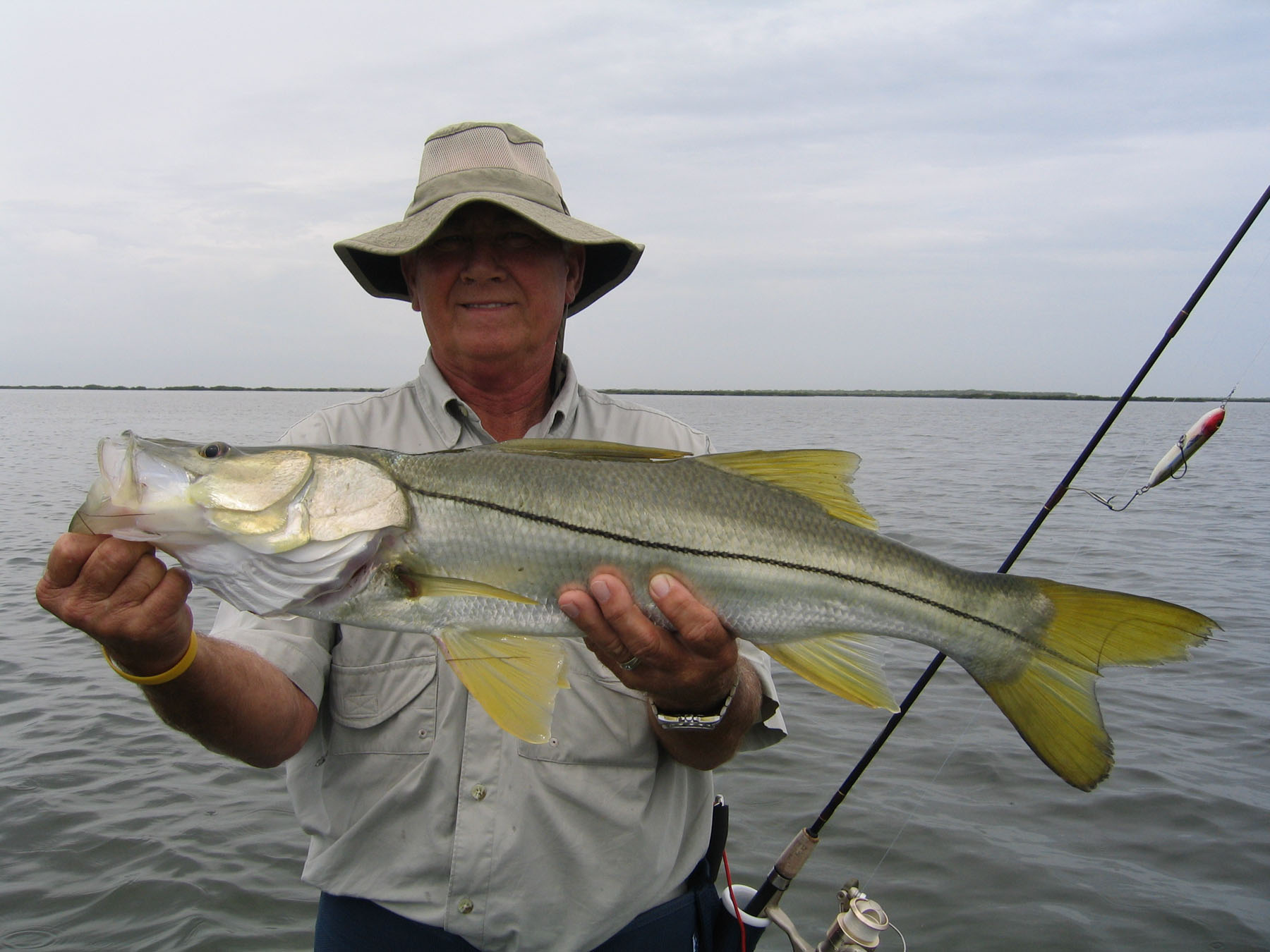 John Hill waited sixty-two years for this one.

Between the months of July and September the rain came almost non-stop. I believe it safe to say that it has been one of the wettest of years I can recall here in south Texas. All that freshwater in our bay system during these wet months made it a bit tough on us down here. I heard similar stories from up and down the coast about how fishing was a hit and miss game during this rain saturated period. Even the wind acted strangely by howling all summer long.

Currently, our early fall patterns seem more like late summer conditions. The winds have come to a halt and slick conditions have been the norm early in the mornings. Because of the prevailing calm conditions finding fish has been fairly easy, but getting them to bite has been a chore in itself. We continue to throw small topwaters at their submarine wakes. During these conditions the fish are reacting best to the Super Spook Jr with a slow retrieve. Sometimes twitching and then stopping the bait has enticed a commitment from brawny reds. When we know the fish are absolutely refusing our hard plastics, we switch to soft plastic tails like the smaller Brown Lure Co. sea devils in plum/chartreuse or amber/chartreuse. Those two colors have been really hot for us in the beginning of this fall season.

Our water levels are averaging well above normal due to the influence of tropical depressions and hurricanes out in the Gulf of Mexico. All this water has allowed gamefish to venture off into flooded grass flats that have come alive with well-balanced and readily available meals of shrimp, crabs, finger mullet, and pinfish. The shallow grass flats are a place where redfish seem to enjoy sticking their tails out at us, almost like they are waving us to draw closer.

If you want to make your "tailing" experience more successful; stealth is the key. The wake you push as you wade should be minimal and all eyes should focus on anything that looks like a small ripple on the water's surface. Learn to distinguish between a redfish tail and that of a sheepshead or mullet. I think if you can get a close look at the tails of these three species out of the water you will be better able to differentiate one from the other when they are swimming.

October is certain to bring a few mild cold fronts that will make our water temperatures drop and this will be a welcome change for anglers as well as the fish. During the heat of the summer we were finding ourselves wading deep even early in the morning. Now, we are finding good concentrations of fish up shallow. Currently, between the grass and sand transition has been a good place to start early in the morning. Redfish along with numbers of sheepshead are starting their fall feeding frenzy. It has become commonplace to see small shrimp skipping across the surface only to be devoured by a hungry predator. With all the freshwater that has entered our bay, the shrimp and crab populations should be plentiful. We are really looking forward to seeing all this freshwater work its positive impact on these important crustaceans. October's generally mild weather patterns will cause fish to remain on shallow flats throughout the day, unlike the summer where once the water temperature heated up your best bet was to look deep.

October will bring opportunities to find large groups of redfish roaming grass flats and trout up shallow where potholes are present. Shallow, muddy, grassy flats will be great areas to witness shrimp being chased by starve stricken redfish.

If you look closely at your catch you will start to notice a slight weight gain around the belly, just like we tend to do during the holidays. This weight gain will be more noticeable in the coming months. This month also marks the fall flounder migration, but unfortunately up until this write we have seen very few flounder caught this year. Sadly to say our flounder numbers on the Lower Laguna Madre are way down this year. Where did all the flatties go? The disappearance of our flat fish is a study in itself.

Recently, I got back into the gym and let me tell you after a few days of lifting I had muscle aches in places where I didn't even know I had muscles; the age factor showed up. In sports like tennis, football, basketball or many other sports, age and practice plays a big role whether you're successful or not. But, in fishing the fish at the end of your line do not care whether you have been fishing for a lifetime or it's your first day out. Your lucky day can come at any moment you are out on the water or when you or anyone least expects it. Not to long ago I fished two different anglers on two different days; one was in the beginning stages of learning how to use artificials, and the other was on the road of many successful fishing trips throughout his lifetime. The young angler was nine years old, and the veteran angler was in his sixties. Neither woke up thinking that day on the water would bring memories that would last a lifetime. Neither knew they would catch a fish that so few even come close to landing. Their fish didn't care how old they were or how many fish they had previously caught. It was a lucky day for both anglers. Young Nicholas caught and landed a respectable twenty-seven inch trout that weighed in at six and a quarter pounds. Just seeing the kid smile from ear to ear after landing the trout was well worth their trip all the way from Houston. The child was now hooked, and what a way to experience his ninth birthday. Way to go Nicholas! John an experienced angler had never latched on to a snook and didn't know what to expect. His catch came after a driving rainstorm that kicked us out of the water once only to return an hour later. Upon returning he worked his topwater in about two feet of water when a snook decided it was his time to find out what a linesider was all about. He handled the snook and its acrobatics perfectly, and soon after a thirty-one inch snook was in his grips. It goes to show that you are never too young or never to old for the wonderful sport of fishing.

Whatever your age may be now is the time to get out there and experience what fishing has to offer. If it's tailing reds or surface popping trout that you desire, October promises to bring many tales of on the water experiences. Who knows your next time out could be your lucky day.