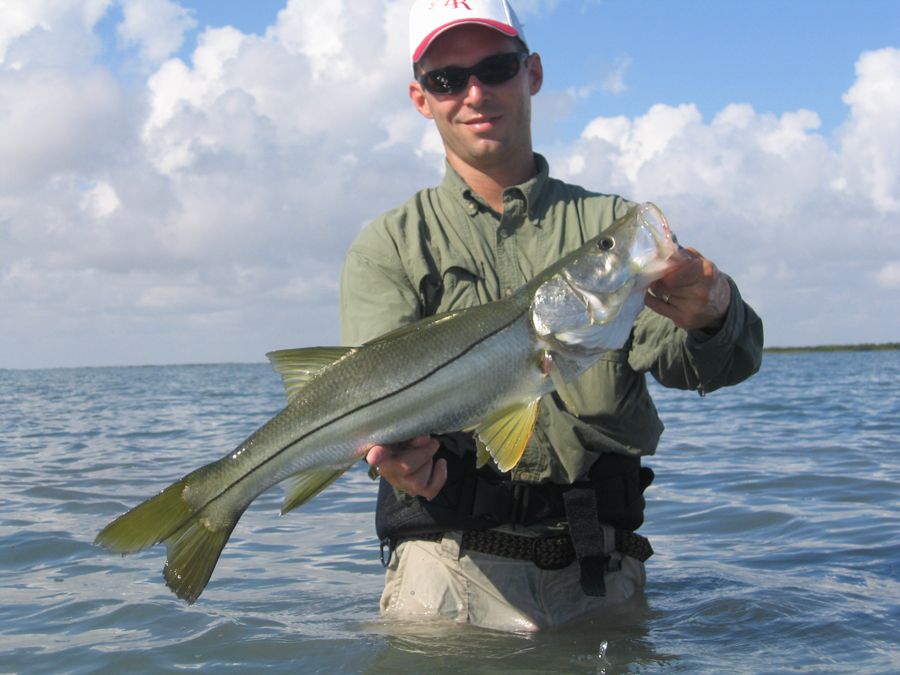 Traditionally, February is the most unpredictable and coldest month of the year for us. We were very fortunate to escape a deep freeze in 2006 and let us hope that February 07 will not bring us what we fear dreadfully here on the Lower Laguna Madre. Despite the cooler temperatures of January, our fishing fared really well. January presented us with good times and outstanding catches in the comforts of our wading gear. February should continue to bring the same success we have been experiencing.

During February much of my effort will be focused upon magnum trout, just like lots of other anglers up and down the coast. But quite often, you will also find me chasing another exciting species; Centropomus undecimalis, the common snook.

I find it amusing when fellow Texans first learn of the possibility of catching a snook in Deep South Texas. Their stare is that of disbelief, and some have me repeat the words just to make sure they heard correctly, "We do have snook in Texas." Without a doubt, summertime snook have my complete attention, but I also chase them in the winter months. I will admit it's not the same as throwing topwaters at angry spawners, but winter snook fishing keeps me tuned up for what is to come.

My greatest satisfaction comes from teaching clients new methods or techniques that improve their catching abilities, and along with this comes the opportunity to put an angler on their first snook. When I am able to assist someone with that first fish my smile will stretch from ear to ear. On a few occasions I think I have gotten more excited than the lucky angler.

Targeting winter snook is totally different than fishing for snook in summer. In the winter I use techniques that a bass angler would use on their favorite lake. I not only look for bait activity on the surface, I also concentrate on points and underwater structure that might hold a snook waiting for its prey. Contrary to what some people might think, snook usually travel in numbers, so when the bite is on, you better be prepared- this is no time to be pulling out backlashes or getting your lure stuck on some underwater structure. This is why I instruct my anglers to bring an extra rod and reel ready to be used.

In the wintertime we are throwing subsurface baits and on occasion when the conditions permit, a topwater can draw some winter snook up from the depths of their holding places. Soft plastic baits are the number one choice; light colors seem to do better than dark. Corkys are also a good choice and have been very successful in fooling snook. Crankbaits such as the Baby 1-minus and Rat-L-Traps too have done their share of enticing winter snook to come out of hiding.

I mentioned before that it brings much pleasure to be able to put someone on their first-ever snook. Whenever the word snook is mentioned, a recent account always comes to mind, a story of Tommy Rice whom I now can call a friend. Tommy had definitely put a lot of effort into catching a snook, numerous times in fact. He had made three trips to Florida but his efforts all went unrewarded. It wasn't because there weren't any snook around, and it certainly was not Tommy's lack of fishing ability; I can attest that he can hold his own on the water. Yet each time he sought that elusive snook, the weather conditions were not favorable.

This past summer I had the pleasure of fishing two days with Tommy and friends and we were on some big snook. The first day everyone but Tommy caught snook. He was using the same bait and placing it in the same general area as the rest of us but to no avail. At one point everyone was either getting blow-ups or hook-ups, but not Tommy. After watching all this activity but not being in on it, Tommy decided he'd had enough. He went back to the boat to collect his wits. To make the story short, he caught no snook the first day.

The second day began as a mirror-image of the first; everyone was catching but Tommy. Frustrated, he went back to the boat to get a bottle of water; I threw where he'd been casting and landed a thirty-two inch snook. I could tell he was now beyond frustration. Doubt was beginning to settle in so I offered a few words of encouragement. I told him his snook would come and that he was sure to enjoy the most spectacular fight of all. About thirty minutes went by and as hoped Tommy was more determined than ever. The moment that had been eluding him finally became a reality. When he hooked up on that energetic linesider, we all stopped fishing and watched the fight. It almost seemed that snook had a purpose in Tommy's life-- to never give up on your dreams and desires. His snook put on a show, jumping completely out of the water eight times and displaying impressive acrobatics. I believe we were more nervous than Tommy. Eight minutes seemed like eternity until he got hold of it with his Boga Grip and everyone was able to breathe a sigh of relief. The snook was finally his and a trophy at that, measuring thirty-one and a half inches.

A few days later I received an e-mail from Tommy. It was then that I realized just how bad Tommy Rice had wanted that snook. Tommy also shared that he documents every fishing trip for his grandchildren to read and enjoy. What a treasure!

Our winter snook fishing has been outstanding thus far; even in the chilly water they have not disappointed as they display their awesome fighting abilities. I have mentioned before in a previous article, "To catch a snook, you must be more persistent and stubborn than a snook," and only those that have had the experience of catching one know what I mean. If you can leave the big trout alone for a couple of days this winter, you might want to head on down and give winter snook a try, you just might become as addicted as I am. Perhaps you will be the next angler with a snooky smile on your face.