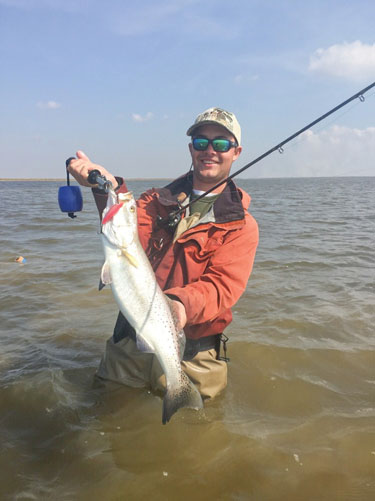 Kyle Holmes with a solid 7 on a Soft-Dine XL.
Welcome to spring on Galveston Bay! As soon as it gets warm and sunny with hope of a stable spring pattern, Ol' Man Winter shows up and throws us back into the cold-dreary winter we are so ready to be done with. As a whole, the Galveston Complex is shaping up nicely. Freshwater isn't such a big deal anymore. Fishing has been good on good weather days.

The fresh inflows of January and February has really set us up for an amazing spring. For the last few years we haven't gotten much freshwater through our upper bay regions. The lack of freshwater made for a great year-round fishery but in the grand scheme of things, it hurt us at the same time. A large portion of the fish populations held in the upper bay regions and marshes seeking lower salinity, no reason to come out into the main bays.

For example; the Trinity marsh; Reds, Cross and Long Island Bayous, average about 11-15 feet depth. That depth is very sustainable for trout and redfish to live in and with enough bait flourishing, they stay content. This winter we had a lot of freshwater being dumped from Lake Livingston so it flushed the marsh and therefore pushed the fish into the bay. Since most of our fish are now in the bays, we are in store for an abundant spring.

Mid-winter patterns remain important this time of year, until the water temp stabilizes around 65-68 degrees. Once we get into a true spring pattern, the fish will transition from mud to a sandier bottom. Think of this like wearing a black shirt (mud) versus a white shirt (sand) in the summer.

April makes me think of stiff south wind, but an opportunity to catch a trout of a lifetime in Galveston Bay. April is when trout begin to spawnand feed very aggressively. Think of a mature sow trout in April like a mean and fired up pregnant woman. While Big Momma trout is getting ready to spawn, she gorges on large mulletthink big topwaters!

Trinity Bay isn't yet 100% recovered but it is close. Drifting deep mud/shell has been productive. Tidal Surge's Split Tail Mullets and MirrOlure Lil John's are great lures for locating the school. Then you can switch to a Maniac Mullet or MirrOlure 52MR for a bigger bite.

Redfish have been plentiful in large schools in the middle of the bay. Wading in Trinity has been spotty on the north end but improving on the east shoreline. You cannot go wrong with a Corky Soft-Dine this time of year. The Soft-Dine imitates smaller bait fish that are starting to make their comeback into the bay during the spring, such as glass-minnows.

East Bay has been pretty consistent. Bayou drains on the south shoreline are go-to spots in spring. Wading with Fat Boys and Soft-Dines can be dynamite here. The south shoreline can also get exciting with topwaters at first light and sundown. Don't be afraid to try slicks popping out deeper. East Bay trout begin moving to the deeper oyster reefs later in April, setting up fun-filled drift fishing.

West Bay fish are still in mid-winter pattern, over deep shell on colder days. As soon as the water temperature reaches 60 they start to move to shallower to mud and shell combinations. Action is currently steady when the weather calms and we are beginning to see some topwater bites when the surface hits 60. Redfish have been abundant over thick shell piles adjacent to deep water and have been caught as shallow as 1-ft over grass and shell on warmer days. South shoreline coves are producing mixed bags of trout, flounder and reds during warmups.

Coming up on April, the bait should start moving in heavily as the temperatures rise. You can count on the trout and reds to start congregating in the traditional wading spots, as well as the shallower reefs and shorelines that dot the entire West Bay area. The coves on both north and south shore of West Bay traditionally produce consistently good catches with warmer spring weather. Chocolate Bay starts to heat up at the same time. Once we hit 70 reliably, the fish will spread out and be found mostly on shorelines, still adjacent to deep water, but ranging much shallower as they follow bait schools.

All in all, fishing is good and should only get better and better. Be safe out there and be respectful to your fellow fishermen. Stay tight! Capt. Caleb Harp