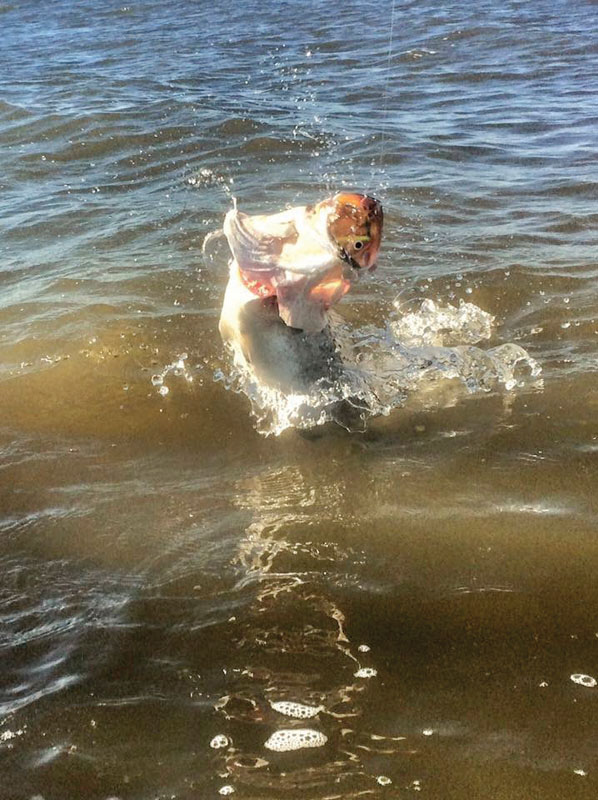 They've been hungry for Soft-Dine's.

Galveston Bays have been in full spring pattern for a while now, at least a month ahead of schedule. Ol' Man winter still threatens occasionally but nothing significant comes of it. March has been windy but we have all seen worse. One day it will blow 20 out of the East, then 15 out of the west, then 15-to-30 out of the south for three or four days. I call it the washing machine effect as eventually everything gets churned up producing muddy water nearly everywhere you look.

But don't let dirty water trick you into thinking the fish have left. You don't just pick up and move because your house gets dirty, do you?

Fishing dirty water calls for dirty-water colors and louder baits. I am a fan of lures with a distinct break in the color scheme, for example: morning glory with chartreuse tail and glow with a red head. I think fish can see the bold contrast better than one solid color, making it easier to catch their eye and ultimately producing more strikes. Louder baits such as the MirrOlure She-Dog will gain more attention from fish in nasty water conditions as well, due to its higher-pitched rattle.

April has potential to produce heavyweight trout. Trout will begin to spawn later this month but until they do the eggs they are carrying only add to the wintertime weight they are still packing. Spawning female trout can be likened to pregnant women; unpredictable mood swings, uncommonly aggressive at times, and they need to eat more than normal.

Biologists tell us that moon and tides affect trout spawning and the full moon with strong incoming tide is one of the biggest triggers. Unlike bass, trout do not prepare spawning beds nor do they hang around and protect their offspring. It's a dump and run event. Females release eggs with multiple males swimming around them releasing milt. The tide mixes it all up and everybody swims away. Nature takes care of the rest.

The full moon will occur on April 22 and I look for the days leading up to it to offer exceptional opportunity for trophy trout. All lures should produce but I favor full-size topwaters and Corky Fat Boys to take advantage of aggressive full-moon feeding behavior.

West Galveston fish are in normal spring pattern. Fishing drop-offs with shell has been consistent on cooler days but as soon as the water temperature reaches 62-63 they've been crushing lures in shallower water over mud-shell. Fishing has been great in general whenever the weather cooperates, most bites are coming on MirrOlure Provokers with 1/16-ounce jigs and topwaters too, when bait rafts are prevalent. Look for trout and reds to congregate on shallower reefs and shorelines as April progresses.

East Bay has been good for keeper trout with a few reds and flounder around bayou drains on the south shoreline. MirrOlure Soft-Dines, MirrOdines and Catch-5s have been good choices this spring. It seems like one day they want one or the other and that's all they'll eat. Fishing with smaller soft plastics such as the MirrOlure Lil' John has been productive on days when they seem to be in less aggressive feeding mood. April will set up the trout's transition to the larger of East Bay's oyster reefs. Keep an eye open for slicks and do not hesitate in making a pass on the famous "PVC poles."

Upper Galveston Bay has been the hot spot for trophy caliber trout lately and the word's been out for a while. It's not uncommon to be wading solo and have 5 or 6 boats pull up on the same flat and join your wade. I have a suspicion that a lot of these big trout are fresh water refugees from Trinity Bay. They act like a dog dumped in a strange neighborhood, uneasy in their surroundings but hungry and willing to take from food from any outstretched hand.

Mature resident trout in general remind me of mottled ducks, a species that does not migrate and spends their whole life on our coast. They know their home turf better than you know the back of your hand, masters in detecting danger and quick to notice anything out of place. Refugee trout, as I call them, act more like blue-winged teal (and stray dogs). Quick to commit and easy to deceive. Eventually the water temperature will get too hot for the nasty Upper Galveston mud-bottom flats and these fish will push out deeper toward the ship channel.

Stay safe and be respectful to your fellow fisherman. -Capt. Caleb Harp