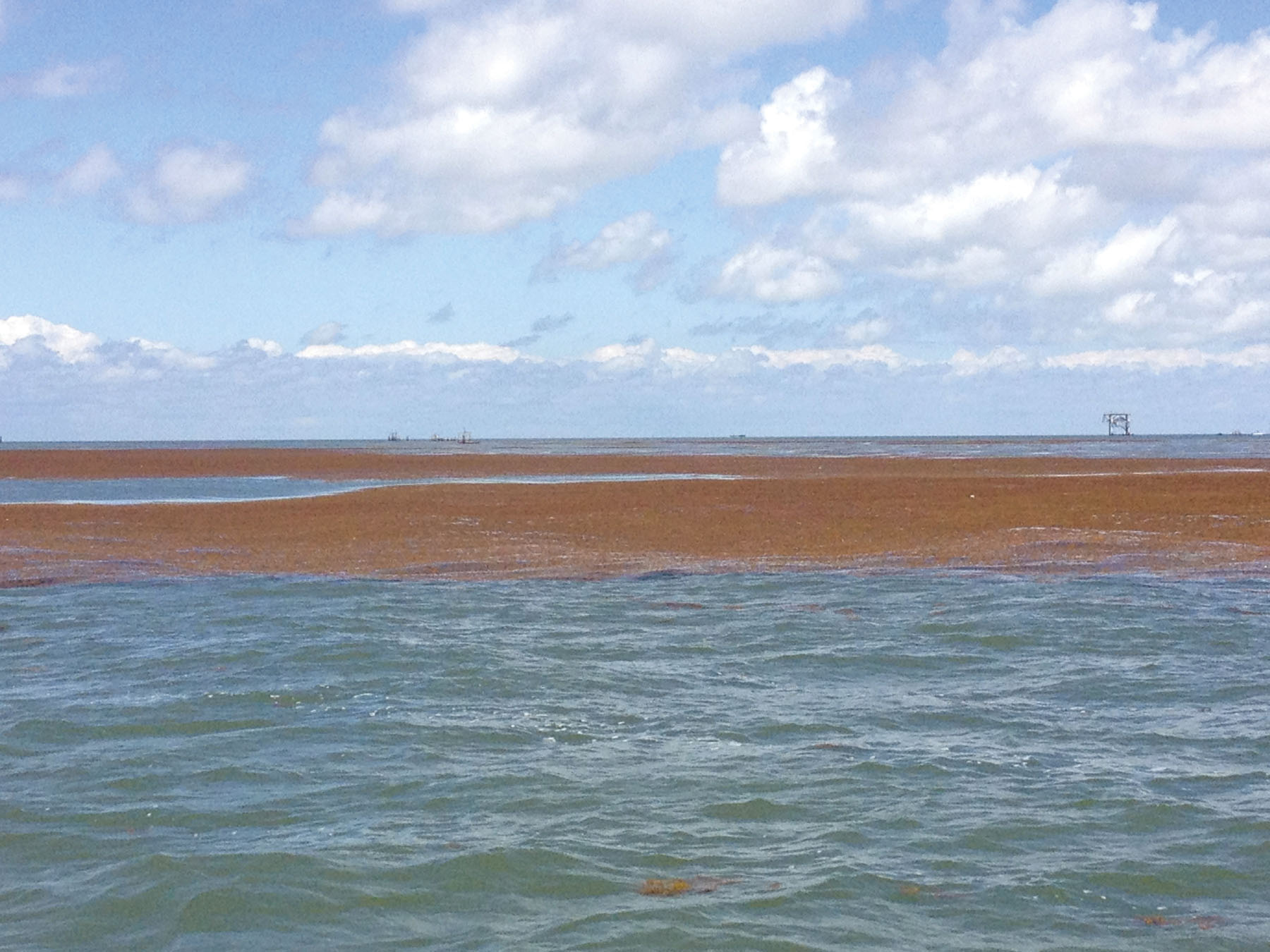 Acres of Sargassum near the Bolivar Wells in East Bay.
The last four days of May gave great hope for a stellar June. The wind was finally subsiding and catching was pretty consistent. June 1st gave us easy limits. On June 2nd the winds came and almost four straight weeks of misery ensued. The forecast was about the same every day "Southwest 1520 with gusts to 25; small craft should exercise caution." Catching was tough by June standards with only a handful of semi-calm days. The dreaded southwest wind was pretty much a daily occurrence and if you're a lure chunker then you know what a stiff wind from that direction does to the bite, not to mention the water clarity. About the only folks catching much were some of the guys using live bait and fishing protected on the western side of Galveston Bay.

We fished through most of the adverse conditions with mixed results, a couple days of three to four fish and quite a few "dozen" days. It was a true grind but we made it work. Late June and early July brought calm conditions. Twenty to thirty trout per day with some reds and flounder mixed in was not uncommon, but you still had to work for them. Salt Water Assassins and Tidal Surge Split Tail Mullets were our go-to baits. The topwater bite has been pretty good also.

Overall, our catch rates seem to be down a bit compared to this time last year. I'm not ready to start drawing conclusions just yet, it's been such a strange year and things can change overnight. However, there are a few observations worth mentioning. There are more shad bay-wide than I've seen in a very long time. I believe numbers of trout get pulled away from reefs, following the shad. In addition, 20 plus mph winds prevent us from fishing where most of the fish live this time of year. It would be anybody's guess how many trout we actually have in the bay at present.

Growing up on Dickinson Bay, a west or southwest wind didn't necessarily ruin our day because we had numerous live oyster reefs from which to choose. We had Dickinson Reef, Half Moon Shoal, Mosquito Island, Dollar Reef, the Levee Reef, Todd's Dump, and April Fool Reef just to name a few. They were all thriving with live oysters and held plenty of trout and redfish. Through the years hurricanes and high salinities have taken their toll. Many of those reefs are partially silted over or have experienced some mortality from high saline-thriving parasites. There are other oyster reefs throughout the bay system that have suffered as well. We still catch some fish in these areas, but "some" is all we catch. Many of our trout seem to have relocated to areas with more live reefs. Ongoing oyster reef restoration projects being handled by TP&W Coastal Fisheries and commercial oyster dealers will continue to help the situation, but Mother Nature and Father Time will be the true healers.

Throughout July and August the patterns shouldn't change much. East, Trinity and lower Galveston Bays will be our focus areas. Trinity has shown some good signs recently. Open-water shad balls, slicks over shell and a few wells are starting to produce. East Bay reefs have been only average most days, but you can still catch enough by being persistent. Some reefs are holding more trout than others, but you'll have to be willing to deal with some traffic if you want to fish there. Wells, reefs and spoils near the channel are all holding decent numbers of trout and reds when the water clarity holds up out there. Reefs in lower Galveston Bay are holding a fair number of trout, but many are in the 12 to 15 inch range. We're actually seeing this in several areas right now.

We've had quite a few open-water schools of reds for a while and that's been a lot of fun. They've been in just about every part of the bay system. They're slicking and mudding on some days while others they're just popping breadcrumb-trail slicks. H & H Queen Cocahoe Minnows and Hogie swimbaits on 3/8 ounce jigs have worked great, but it almost doesn't matter when you get on the right school. The jetties have been good for trout and reds for those using live bait. Some of the guys wading the surf have had a handful of decent days, but the sargassum is so bad most days that it's almost impossible to fish.

I hope everyone is enjoying their summer. Pray for calm seas and good catching!