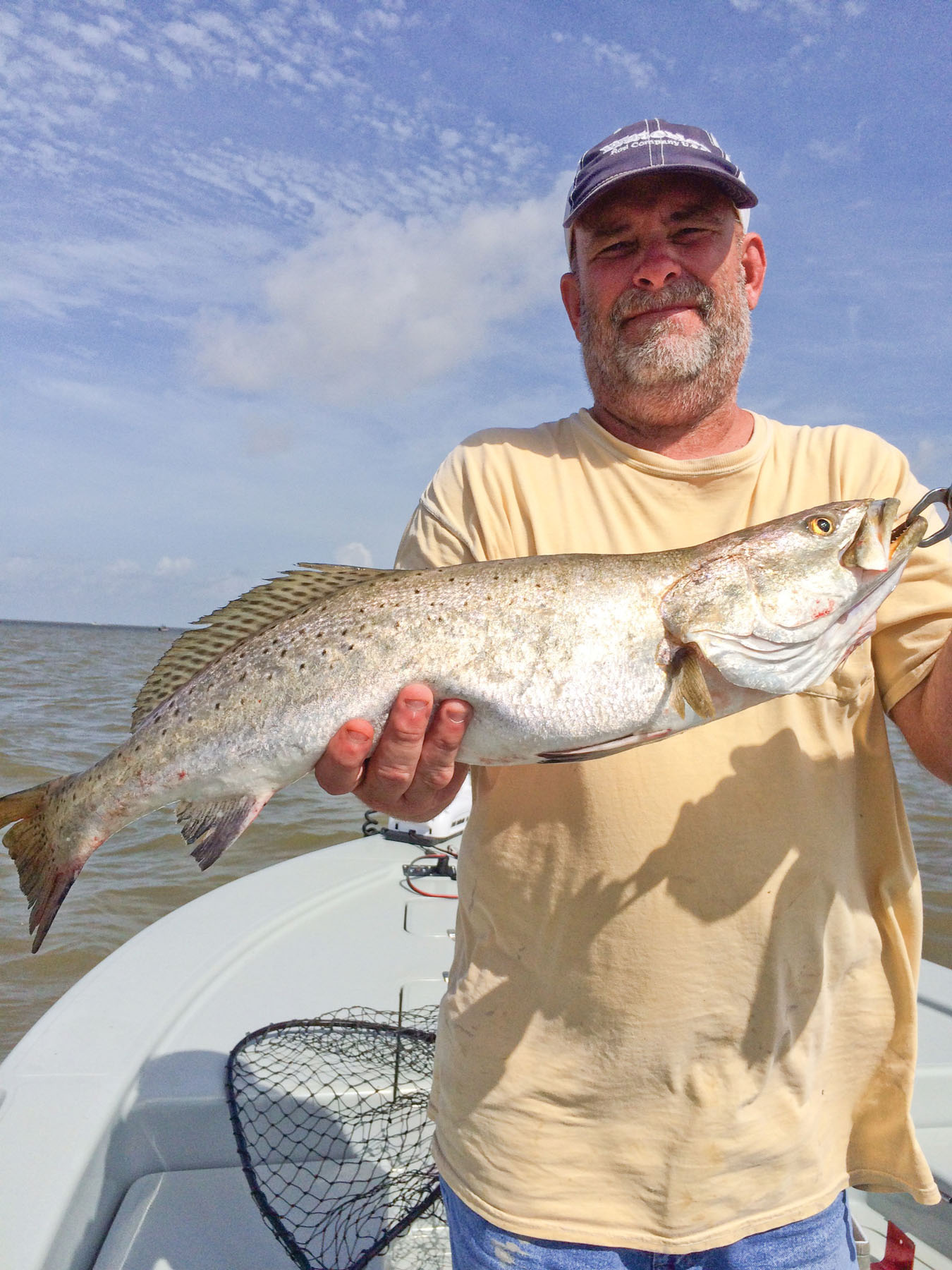 Clay with a 7lb victim of a MirrOlure Lil John.
I hate to say that we are starting to salt up because when I said that in the April we got 13 inches of rain later that week. The Galveston Bay complex is still about 45% completely fresh. Another 15% of the bay is fishable, but so muddy that you could grow corn in it. As bad as another big push of fresh water would seem, the damage is already done, at least as far as this summer's prospects are concerned.

As bad as the flood was/still is in some places, the fishing is just incredible in others. I wrote here last month that the flood has congregated the fish in certain areas. This is still true but unfortunately those areas are now widely known and very popular. It's not uncommon to see 50 to 60 boats already parked where you planned to go.

Right now, the Lake Livingston dam discharge on the Trinity River is ONLY 28,400 cubic feet per second. That's a pretty substantial drop from last month's 73,000. IF WE DON'T GET ANYMORE RAIN (big IF) the salinity will begin to recover and the fish will start to spread out–and so will the crowds.

Trinity Bay is still full of blue cats, channel cats and crappie. It's fresh and will continue to stay fresh for a quite a while. With the Lake Livingston dam pumping 73,000 cubic feet per second into the top of the bay for a prolonged period of time, there's so much fresh water that it will take some time before the salt water coming in from the Houston Ship Channel can dilute it.

Some people don't understand the term cubic-feet-per-second. 70,000 cubic feet per second is equivalent to 259 dump trucks, full to the brim with fresh water, all dumping in one second. Do that every second for 24 hours and that's the volume of fresh water we had coming down the river. A 40,000 CFS reduction in discharge rate is a step in the right direction but Trinity Bay salinity will not recover overnight. It's going to take some time; my guess is that we might be able to fish Trinity Bay sometime in late-August or September.

Upper Galveston Bay is still mostly fresh from all the water that came down the San Jacinto. There is presently a salty layer at the bottom of the ship channel, and more salty water is flowing daily up the channel. This area will recover much sooner than Trinity.

East Galveston Bay is producing most consistently among all our bays but it's so crowded that it will make you want to pull your hair out. Traditionally, the trout have been plentiful on the oyster reefs that cover much of East Bay's bottom during summer. Fishing these reefs can be quite successful and fun, even in the crowds, if done right.

When approaching a reef, take note of the wind direction. Avoid disturbing the reef and other anglers with your outboard motor, running on top of the reef, idling toward a position, etc. Simply idle around, well away from the reef, and let the wind carry you in. Use your trolling motor to keep position or move around while on the reef and near other boats. Think of this as taking turns. The guy drifting behind you might be catching fish too, do not crank up and haul butt, spooking the fish he was targeting.

The bite has been fairly steady but low and slow, for the most part. Darker plastics (Tidal Surge Split Tails; plum-chartreuse) bounced off bottom have been doing very well. Every once in a while a faster presentation has been getting bit and that tells me that some of the fish are now feeding higher in the water column; maybe the salinity is improving. Let's hope.

West Galveston Bay has been generally good but the feeding patterns can be a bit finicky. Waders are doing well on trout and reds on grass bottom and also over sand and shell bottoms throwing MirrOlure She-Dogs and soft plastics. Topwaters early and then switching to soft plastics when the top bite plays out is the name of the game. Redfish are still thick against the grass and sand pockets along many shorelines. The key to this is vision. You have to be able to see the fish and the sand pockets amongst the grass to be able to fish them. That's where a good pair of polarized sunglasses become valuable. I like the Costa 580Gs, their unmatched contrast and color definition make it a lot easier for me to spot fish and structure.

Hopefully the rain is done and we can soon get back to normal.