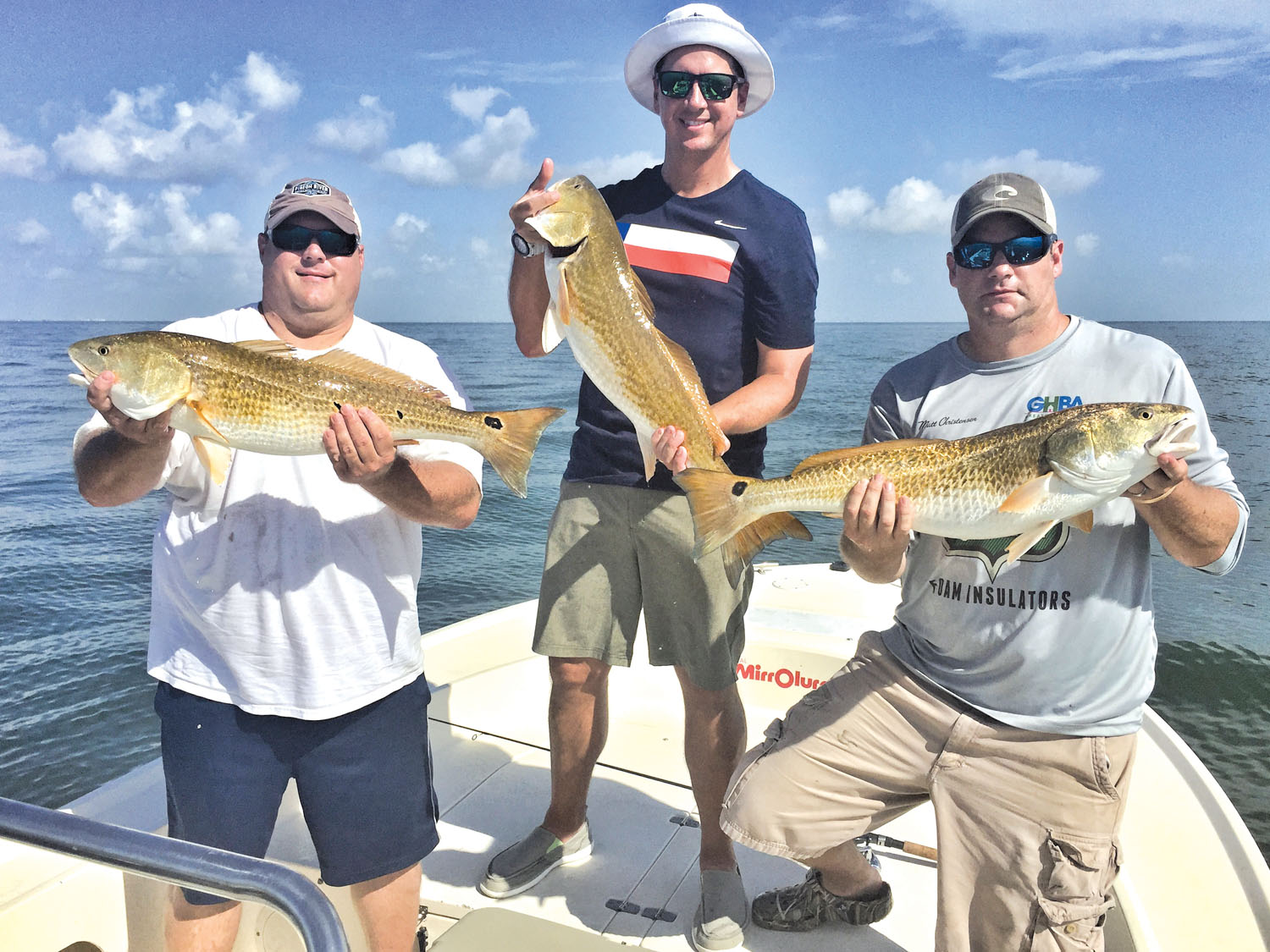 Open-water schools of redfish are always an August highlight. Watch for mud-boils!

The rivers are receding and the bay is turning greener by the day. I almost hate to say this seems every time I do we get another flood. Trinity Bay is still very fresh, as is the back of East Bay from fresh water draining through the Needmore Diversion Channel and flowing down the ICW. All in all, though, the bay is looking awesome compared to this time last year. Tide coming up the Houston Ship Channel cleaned up a lot of the San Jacinto inflow, turning a muddy mess emerald green in a short span of time.

Earlier this summer I was concerned that tide-runner trout would not enter the bay because the bay was so fresh. We actually got very lucky with great incoming tides boosted by strong southerly wind and equally  hard-running outgoing tides. It surprised me how quickly the salinity began to recover and the tide-runners came right on in.

To me, the tide-runner influx is a godsend, and I will try to keep this in a nutshell.

Trout that would normally be found in Trinity Bay and upper portions of Galveston become displaced by fresh water from the Trinity and San Jacinto rivers. Trinity fish migrate south along the eastern shoreline and eventually round Smith Point. Here they meet with East Bay fish fleeing the freshed-out eastern reaches of that system, and a stack up occurs on major reefs at the front of East Bay. The fishing becomes exceptional and a flotilla of boats descends upon them daily. You could almost term it a massacre.

When the salinity begins to recover, the trout naturally head back north, predominantly by way of the Ship Channel. Last year, the guys throwing live croaker between Ship Channel markers 40 and 72 just smashed them every day. Some made it back to Trinity but the fishing there just never developed in late-August and into early-fall as we normally see it. There seemed a dramatic decline in the late-summer deep-water schooling and slicking pattern it just never really happened. I wonder why?

Perhaps now you might understand why I view the tide-runners actually coming through the jetties this summer as a godsend. Many longtime guides and Galveston old salts are of the belief that without them the Trinity refugees would get hammered in even greater number. I have my fingers crossed that we will not witness an exact replay of what we saw last year in Trinity, come late-August and through September.

Now let's have a look at patterns that hopefully will develop as the salinities recover across the bay system. Trinity Bay has been out of play all year but with green water coming up the Ship Channel it could be only a matter of a few weeks and she could be back in the game. Mid-bay gas wells will light up first Sun Oil, Getty Oil and Exxon C-Lease. Each well has its own foundation pad that offers structure for attracting and holding bait and gamefish. Each pad is unique and your depth finder will pinpoint the humps and undulations to target. The angle of presentation is always critical at the wells throwing up-current and working lures with the flow out-produces all other techniques combined because trout always feed into the current. Attacking from the rear just isn't very effective. Current velocity will dictate jighead weight. Lighter is better, but you have to get it down to them. We sometimes find it necessary to go as heavy as 3/8 ounce when the current is ripping.

West Bay
West Bay has become less consistent lately but should improve down towards San Luis Pass as more trout come in. Wade fishing sand flats and guts around Bird Island and the pass itself can be phenomenal with MirrOlure She Dogs and other high-pitched plugs when this happens. Redfish action has been and should remain steady on north shoreline grass beds and in the back lakes. Weedless-rigged paddletails should be deadly MirrOlure Marsh Minnows are some of the best.

East Bay
East Bay is struggling in the wake of heavy pressure. You can definitely see the effect of anywhere from 20- to 60 boats on every reef daily for the past couple of months. Back in June you could drift any hard spot and get a quick limit. You're lucky now to get 20 on a full-day effort. It'll get better as the bays continue to clean up and more tide-runners appear through the passes.

We're shaping up nicely and the bite will soon be on in places we haven't been able to fish for months. Hallelujah!