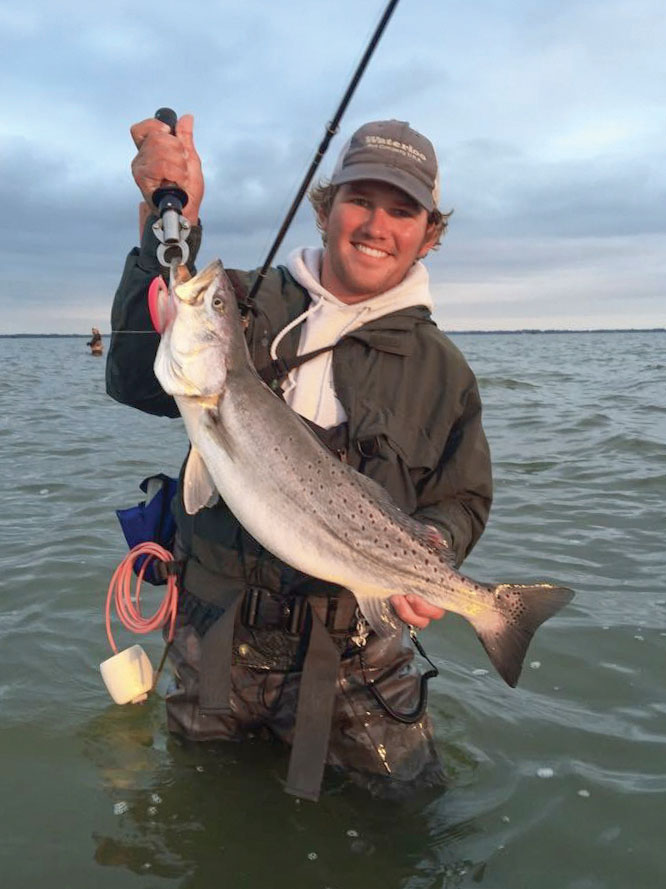 The Great Flood of 2015 – Again! Two weeks ago we were catching lots of decent trout wading shorelines and drifting clam shell pads. The water quality was very good across the whole Galveston Bay system–good enough for sight-casting redfish on the grass flats–the schools were huge and hungry enough you could catch them 'til your arms ached. Big trout were starting to show in traditional fall places and we were living the dream; couldn't wait to see how much better it would get as the season went on. Then it started to rain... Noah-class.

Just like last spring, the rivers are running flood stage and the bays are becoming inundated with fresh water. Talk about déjà -vu!

We thought we were set up for a perfect late-fall and winter season when Mother Nature struck again. Over the past two weeks we have received an average of 20-inches of rain across the region, more in some places. Homes and businesses all over the Houston area were completely flooded. The current in almost every bayou and slough feeding Upper Galveston is rushing uncontrollably. The Trinity River went from almost no flow to 54,300 cfs at Livingston Dam, and rising.

As negative as all this sounds, it will be okay in the long run. The fish didn't die; they're simply fleeing the flood. This isn't our first flood and won't be our last. You have to remember what we went through earlier this year. In May, Livingston was discharging 74,000 cfs and it continued seven weeks. Trinity Bay and the northwest corner of East Bay were completely wiped out. The San Jacinto River flooded out the entire north end of Upper Galveston and the Ship Channel down to the boat cut of the North Jetty, but this water got salty way sooner with the tide rolling up the ship channel. All the fields and canals around Anahuac drained through Oyster Bayou. The back end of East Bay got freshed-out but the fishing remained surprisingly good. We caught them all summer and followed them back to traditional areas that quickly regained salinity once the rain quit.

If the rain quits and lays-off from this point forward we will be in far better shape than this springthere is a huge difference in 54,300 cfs and 74,000 cfs. If the rain keeps up we'll all be ganged up again in Lower Galveston. Each passing front will push out more fresh water and when the south wind blows it will bring us clean salt water from the Gulf. It's all in Mother Nature's hands at this point.

I expect West Bay will very good this winter. Traditionally, wet winters provide exceptional fishing in this region. The neighborhood canals, lakes and bayous that a lot of fish reside in get flushed and the fish end up in the bay. Shallow oyster reefs with deep-water access nearby and the south shoreline coves are go-to areas in winter. Work these areas thoroughly with Corky Fat Boys for best results. Drifting muddy streaks in the middle of the bay can be dynamite as well. West Bay is least affected by fresh water inundation so it may become pretty crowded.

East Bay is receiving a lot of run-off from Oyster Bayou, Robinson's Bayou and the ICW. Most of the backend is fresh but luckily, Rollover Pass pumps up the salinity pretty quickly. December can be amazing in the back of East Bay. The extremely muddy and oyster-filled flats are home to some of the Galveston Bay System's biggest trout. With Rollover Pass pumping in salty water and Oyster Bayou dumping out fresh water, the trout have everything they need to become monstrous. Bait is the key here, wherever the pods of mullet are is where your lure should be. Drifting East Bay in winter can be productive for trout and reds with Corky Devils and MirrOlure provokers over mud/shell.

Trinity Bay is "game over" right now. With 54,300 cfs of fresh water coming out of Livingston it would be more productive to grab a cast-net and go catch some blue cats. The east shoreline gets too hammered by north wind to regain clarity before another blast of north wind arrives. The west shoreline will get obliterated with the stiff northeast winds that follow each front. If the Trinity River flow dies down fairly quickly we may be back to Trinity by late-January but we will just have to see!

Good luck and stay safe out there! -Capt. Caleb Harp